As we continue to wait for Prince Harry‘s memoir to reach our laps for a night of non-stop reading, more of what’s to come in the book is slowly being revealed. On Oct 27, the royal, in collaboration with Penguin Random House, revealed the title and cover of his upcoming book Spare. The cover features Harry in a close, intimate portrait. It’s an arresting first image.

Perhaps even more poignant is the title, which might be a reference to a saying his late mother Princess Diana used to reportedly live by. “She always used to say, ‘William is deep like his dad and stubborn, and Harry is a hothead like me; he does the first thing that comes into his head. They will look after the heir and I will look after the spare,’ ” Diana’s private chef Darren McGrady revealed to the Daily Mail in 2019.

If the link to Diana is true, Harry could be tellingly referring to his mother in the title. After all, Diana’s care for Harry carries on until this day, 25 years after her death. During the controversial Jan 2020 tell-all interview with Oprah Winfrey, Harry said that the inheritance Diana left him was what made him and Meghan Markle take the leap of faith to leave the royal family. “I’ve got what my mum left me, and without that we would not have been able to do this,” he said, noting that “the firm” had cut them off by the first quarter of that year, Insider reported.

Another connection made by many regarding the title is a common phrase the British media used to say about Harry and brother Prince William: “the heir and the spare.” The expression, of course, comes from William’s future title as King whereas Harry seemingly had no chance of reaching the throne.

In today’s press release, the publisher teased what to expect from the memoir. “As Diana, Princess of Wales, was laid to rest, billions wondered what the princes must be thinking and feeling — and how their lives would play out from that point on,” the statement read, per royal correspondent Omid Scobie. “For Harry, this is his story at last.”

“Penguin Random House is honored to be publishing Prince Harry’s candid and emotionally powerful story for readers everywhere,” the company’s CEO Markus Dohle said in the release. “He shares a remarkably moving personal journey from trauma to healing, one that speaks to the power of love and will inspire and encourage millions of people around the world.” 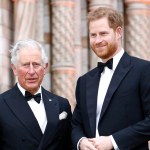 The publishing house added that the memoir is filled with “raw, unflinching honesty” and will have ”insight, revelation, self-examination, and hard-won wisdom about the eternal power of love over grief.”

Spare will be published globally on Jan 10, 2023 and we cannot wait to get our hands on it!