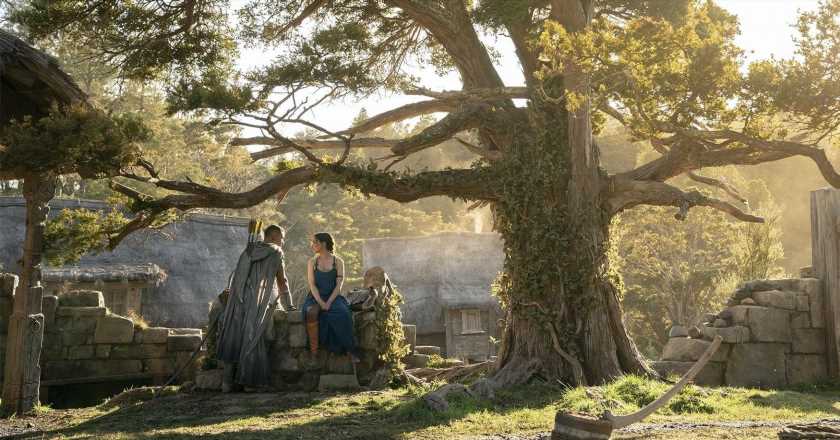 House Of The Dragon and The Rings Of Power have both had an opportunity to create a more diverse world in their big-budget prequel series. But only one show has delivered, says Stylist’s entertainment editor, Christobel Hastings.

Please note that this article contains minor spoilers for House Of The Dragon and The Rings Of Power.

Magic, mythical creatures and the eternal struggle of good versus evil: over the next 10 weeks, two big-budget fantasy adaptations will be dominating water cooler chat in the office. While we’ve recently returned to the world of Westeros in HBO’s epic Game Of Thrones prequel House of The Dragon, a new rival just landed on our screens taking us back to Middle Earth in Amazon Prime’s hotly anticipated Lord Of The Rings spin-off The Rings Of Power.

It’s inevitable, of course, that the two shows will be endlessly compared in the coming months over which has better special effects, action sequences, compelling characters and accuracy to the sprawling epics penned by George RR Martin and JRR Tolkien. Although it’s certainly intriguing that two prestige fantasy prequels should land on our screens at exactly the same time, the idea of pitting one against the other is pointless. Both franchises have legions of loyal fans, mainstream appeal and are different enough that they can both be enjoyed on TV at the same time. At this point, we’re splitting hairs.

Set 200 years before the events of Game of Thrones, House Of The Dragon tells the story of House Targaryen

Let’s start with House Of The Dragon. The hotly anticipated prequel to Game of Thrones, the TV series that made fantasy a cultural force, has just enjoyed the biggest premiere in HBO’s history and garnered stellar critical reviews. Charting the rise and fall of the mighty House Targaryen, the series centres on a family conflict known as the Dance of the Dragons that erupts when various platinum-blonde members of the dynasty compete to take the Iron Throne from the ageing King Viserys. So far, the series has served up bloody violence, brothel orgies, heartbreaking betrayals and significantly more impressive dragons than we saw in GoT swooping through the skies. The fiery, free-spirited Princess Rhaenyra Targaryen (Milly Alcock) has gone down a storm with her rebellions, Matt Smith has captivated as the villainous Prince Daemon Targaryen and Alicent Hightower (Emily Carey) has just lit the fuse of the family conflict with her seduction of King Viserys.

Steve Toussaint as Lord Corlys Velaryon in House Of The Dragon

The Rings Of Power, on the other hand, arrives on the scene as a prequel to three Oscar-winning 00s film adaptations and a claim to being the most expensive season of television ever made (the production reportedly cost an eye-watering £715 million). Loosely based on the events in Tolkien’s The Silmarillion, the series chronicles a time of relative peace in Middle Earth’s Second Age that crumbles with the rise of the Dark Lord Sauron. It’s a spectacle in every sense of the word as we journey from the sweeping vistas of Valinor to the immense kingdom of Khazad-dûm, delving into the doomed scheme to forge powerful magical rings. Much like House Of The Dragon, the show is helmed entirely by newcomers, but while there’s no Frodo or the Fellowship this time around, we do get to meet a new cast of elves, dwarves, humans and harfoots, including younger versions of Isildur, Elrond and Galadriel (Morfydd Clark), who is on a quest to ensure evil has been driven from Middle Earth and thinks nothing of single-handedly slaying snow trolls and sea monsters.

That being said, as an editor who has watched and reviewed both series, one show is sailing ahead in a very important area.

Amazon Prime’s The Rings Of Power

As prequels to fantasy franchises that featured predominantly white casts in the past, both House Of The Dragon and The Rings Of Power have had the opportunity to celebrate racial diversity the second time around. In worlds that revolve around magical rings and dragons, dark lords and monsters of the deep, historical accuracy is hardly important. Why? Because the original works are completely fictional. What matters is that viewers are swept along by immersive stories, powerful performances, characters we can fall in love with and production that transports us to places beyond the realm of our imagination.

In House Of The Dragon, the only noticeable diversity we have seen so far is Lord Corlys Velaryon, played by Steve Toussaint, who was trolled on social media by a racist faction of the fandom after his casting was announced. One of the most powerful men in the kingdom, and a valued member of the small council, Velaryon has been present in most of the significant scenes that we’ve seen in the show so far. That being said, his screen time is not enough to give the show a pass for such a stark absence of other major characters of colour (this could change, of course, as the series progresses).

The Rings Of Power, I’m pleased to say, has taken note of the shortcomings of The Lord Of The Rings, and has favoured a racially diverse cast that is strikingly different from the Middle Earth we last encountered in the film trilogy. In this multiracial world, we find ethnically diverse leads playing elves, dwarves, humans and harfoots (proto hobbits) that are seamlessly integrated into the story, whether we’re hanging out with the harfoots preparing for their migration, or venturing inside the majestic dwarf kingdom.

In the first two episodes, we’re introduced to Sadoc Burrows, a harfoot leader played by veteran British actor and comedian Sir Lenny Henry, the dwarf princess Disa (Sophia Nomvete), and Silvan elf guard and warrior Arondir (Ismael Cruz Córdova), who engages in a forbidden romance with the human healer Bronwyn (Nazanin Boniadi). Although there are racial divisions at play in this Middle Earth – the forbidden love between Arondir and Bronwyn, for instance, breeds hostility from the humans who resent the elven presence in the Southlands – the show is not preoccupied with skin colour, but rather uses its narrative to deepen our understanding of life on Middle Earth, which includes prejudice and discrimination within warring tribes. Ultimately, it is focused on the coming together of those different groups to defeat the nefarious forces of evil.

Amazon Prime’s The Rings Of Power: Sophia Nomvete as Disa and Owain Arthur as Durin IV

Naturally, the diversity in The Rings Of Power has been the subject of toxic, racist backlash, with detractors justifying their complaints by claiming that is has no allegiance to Tolkien’s original material. Such a line of argument is ridiculous, because fantasy worlds aren’t tyrannically focused on racial authenticity. Morfydd Clark, in fact, has previously said that it is nonsensical that anyone could definitively label the ethnicity of Tolkien’s characters.

Lenny Henry, meanwhile, told The Times that it is completely appropriate that The Rings Of Power is a more diverse world than the Middle Earth we were introduced to in the film trilogy.

“That’s to do with it being the 21st century; people want to see themselves,” he explained. “Of course, if you go back, there’s going to be that thing that prevails because the books don’t say… although some of the characters are described as hard-skinned and darker in complexion … but that was then, this is now and we’re telling the story now.”

Amazon Prime’s The Rings Of Power: Nazanin Boniadi as Bronwyn, Ismael Cruz Córdova as Arondir and Tyroe Muhafidin as Theo

Ismael Cruz Córdova, meanwhile, has celebrated the franchise’s push for diversity. After the first two episodes of The Rings Of Power aired over the weekend, the actor shared a moving story about the power of representation.

“It’s not about the billboard – it’s about becoming unmissable, undeniable, irrevocably present and rooted, as a people, as beings, as individuals. A huge “we are here”. And we have been here, he wrote alongside a photo of himself standing by his character on a giant billboard.

“Looking for zero favours but to live with the same chances to dream and thrive as anyone else. If you’ve ever felt discarded, marginalised, silenced – you are my people. And this moment is yours too!”

“This billboard was blocks away from a hostel I once had to stay for a while in a room with bunk beds with many other people who were struggling with housing and money. We all had a beating heart and hopes of a better future.

“My heart was burning with an unshakable goal: to get to where we were told we couldn’t be. Here we are. To share it with the two halves of my DNA was absolutely surreal. My heart is full, of love, of them, and all of you who share this same fire.”

This is not to say that The Rings Of Power is excelling when in comes to diversity. The characters of colour are still but a handful in its depiction of different tribes that are majority white. It is still not enough that we can get epic landscapes and mythical creatures and all kinds of breathtaking special effects, but that creativity is not extended to the cast and characters. And given that these fantasy shows actually revolve around conflict between different tribes, clans and dynasties, it would have been completely believable to have embraced a greater level of diversity. That being said, The Rings Of Powers is expected to run at least five seasons, so there’s every possibility that future series will improve upon the efforts of the first run. For the time being, we can still look forward to meeting the magnificent Miriel (Cynthia Addai-Robinson) Queen Regent of Númenor, the island kingdom that had long fallen by the events of the Lord Of The Rings novels.

Interestingly, many characters like Arondir and Bronwyn don’t appear in Tolkien’s works and have been created especially for The Rings Of Power. And it’s because of their inclusion in the lore that The Rings Of Power has recognised that a successful modern adaptation must evolve from its original source material in order to be relevant to new audiences. Reimagining Middle Earth doesn’t take anything away from the Lord Of The Rings novels. Having been read for nearly 70 years, they will continue to be a beloved part of the fantasy canon. But as the big fantasy revival brings forth new faraway lands, TV shows must show that they are capable of deepening the roots of classic stories. For it is through these fresh perspectives that new audiences will be able to find themselves in the genre.