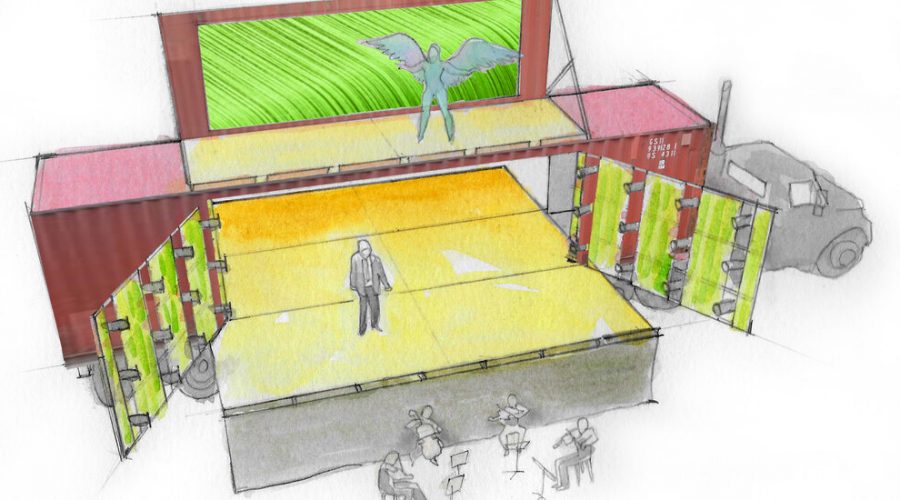 With its theater closed by the pandemic, the orchestra rented a Ford F-250 pickup truck, wrapped it in red, white and black, and drove around the city over eight weekends for short, impromptu chamber events.

The Philharmonic announced on Friday that it would be bringing the NY Phil Bandwagon concept back this spring, but for a shorter period and in more stable surroundings — reflecting the glimmers of a transition back to concert-hall trappings.

Bandwagon 2 will trade in the pickup truck for a 20-foot shipping container atop a semi truck, which will visit four parks around New York City for weekend-long residencies through May. (The full schedule will be available at nyphil.org/bandwagon.) Tricked out with a foldout stage, video wall and integrated sound and lighting, the setup is now more arresting and theatrically attuned.

Its offerings will also move beyond classical and new chamber music into more varied, genre-crossing collaborations with six community arts organizations, including A Better Jamaica in Queens and El Puente in Brooklyn.

“Bandwagon 2 allows us to center the voices of our partners, and utilize the Philharmonic’s resources to amplify the work of our collaborators,” Deborah Borda, the orchestra’s chief executive, said in a statement. The countertenor Anthony Roth Costanzo, who helped create the Bandwagon last year, will have another stint as the program’s producer. 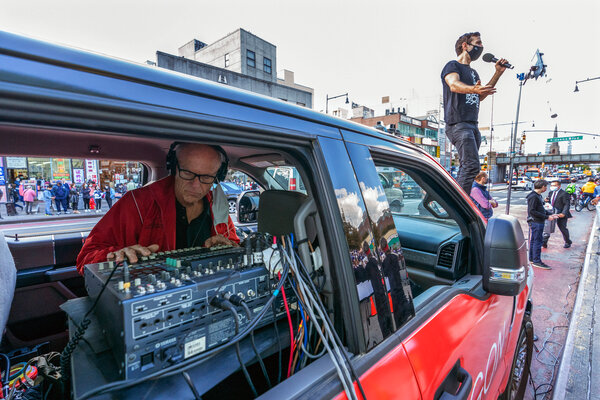 In Domino Park in Brooklyn, the composer and singer Juana Luna and the dancer Elisa Toro Franky, both associated with El Puente, will develop song-and-dance pieces with a quartet of Philharmonic string players as an element.

Domino Park will also host the premiere of Mark Grey’s chamber opera “Birds in the Moon,” about migration and mother-daughter relationships, with a libretto by Júlia Canosa i Serra and directed by Elkhanah Pulitzer; a Philharmonic string quartet will be joined for the performance by the soprano Maria Elena Altany and the actor Austin Spangler.

The soprano Laquita Mitchell will perform with the Harlem Chamber Players at Marcus Garvey Park in Manhattan and with a Philharmonic string quartet at St. Albans Park in Queens. New works by participants in the orchestra’s Very Young Composers Program will be featured each week.

The Bandwagon has been among the Philharmonic’s scattered activities during the enforced pandemic closure of David Geffen Hall, its home at Lincoln Center; in February the orchestra also unveiled the NYPhil+ subscription streaming service. It is taking advantage of the closure to power through its long-delayed renovation of Geffen, which is now scheduled to reopen in fall 2022, a year and a half ahead of plans.

On April 14, exactly 400 days after it had last gathered indoors to play in front of an audience, the Philharmonic returned to live performance for a two-night stand at the Shed. The following day the orchestra announced its return to the Bravo! Vail Music Festival in Colorado in July, and it also expects to put on its beloved summer series of concerts in New York parks. Next season, while Geffen remains closed, performances are planned at Lincoln Center facilities like Alice Tully Hall and the Rose Theater, as well as at Carnegie Hall and other spaces.

04/30/2021 Entertainment Comments Off on The New York Philharmonic Is Coming. In a Shipping Container.
Recent Posts