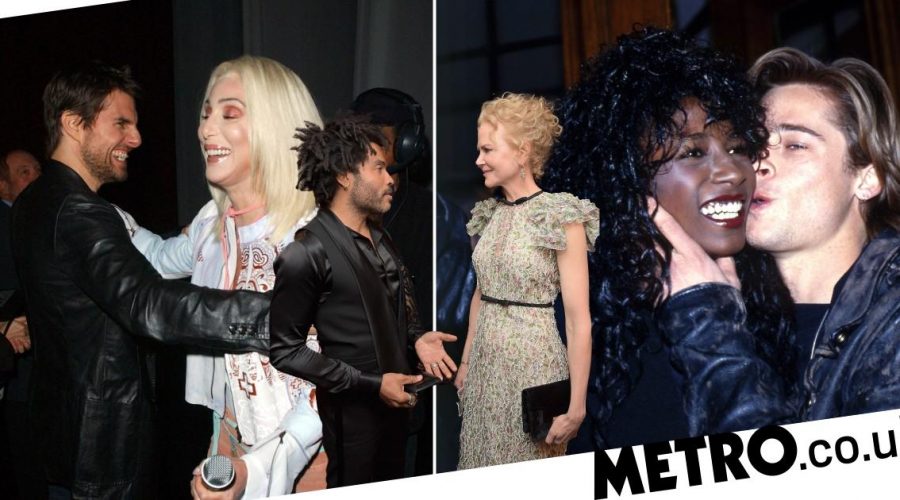 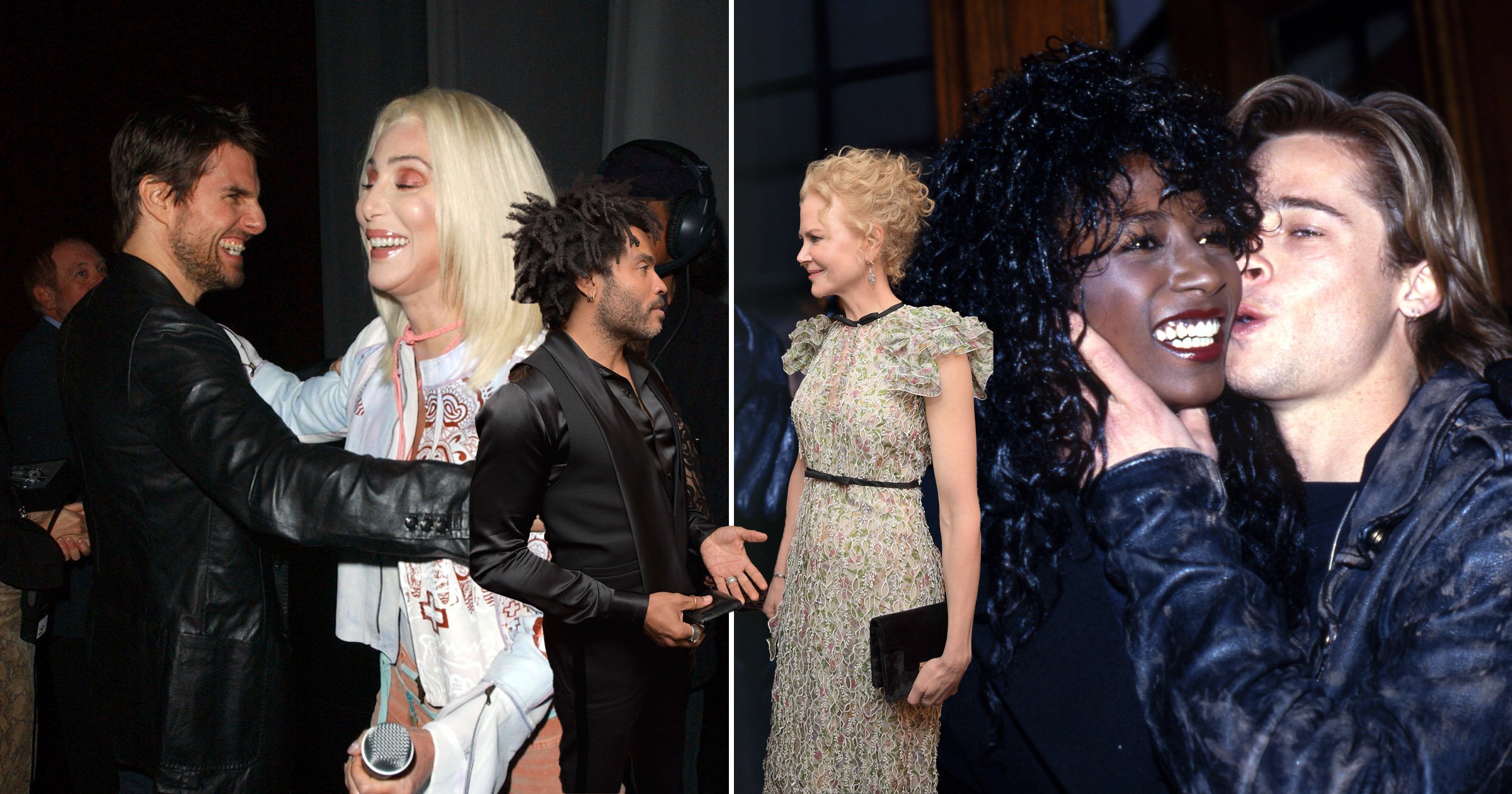 Oh how we love an odd celebrity couple!

There have certainly been plenty of puzzling starry romances over the years, from Jared Leto and Cameron Diaz to Courteney Cox and Michael Keaton.

As if those weren’t unexpected enough, TLC singer Chilli, 51, and Boy Meets World and Mrs Doubtfire actor Matthew Lawrence, 42, have now confirmed their relationship in a plot twist no one could’ve predicted.

Yes, the 90s super couple are dating and are already well-in with each other’s families.

So, in honour of this massively nostalgic romance, let’s take a trip down memory lane and remember some of our favourite weird, but wonderful, celebrity pairings…

Starting off strong we have Julia Fox and Kanye West, who served us meme after meme, and bold outfit after bold outfit in 2022.

Their romance was short lived, as they got together following the rapper’s split from Kim Kardashian, but things only lasted less than two months.

Nevertheless, we will forever be thankful for Julia’s iconic eyeliner and ‘Uncah Jams’ moment.

Speaking of Kim Kardashian, did you know that she previously dated Masked Singer US host Nick Cannon?

While Kim is a mother to four children now, none of them are fathered by Nick, despite him having 12 little ones of his own!

They were romantically involved before Kim shot to fame between 2006 and 2007.

Their relationship ended, though, when Kim’s infamous sex tape leaked.

When we saw 14-year-old Liam Payne wink at judge Cheryl during his first X Factor in 2008, we never could’ve predicted they’d end up together later down the line.

Much to the shock of, well, everyone, they did though, and dated from 2016 until 2018, after 1D started their hiatus.

In March 2017, the couple also welcomed their first child, a son named Bear Grey Payne, whom they continue to co-parent amid the chaos of their celebrity lives.

Whoever would’ve thought that the daughter of Sally from Corrie would end up dating SNL host Pete Davidson?

Phoebe Dynevor dated Pete for five months, with their first official public outing being at Wimbledon in 2021.

They weren’t built to last, though, as the Bridgerton actress and comedian called time on their relationship when it started to fizzle out due to work commitments.

Channing Tatum and Zoe Kravitz are a couple we never had on any bingo card, but our hearts melt every time we look at them.

The stars met many years ago through filming, but it wasn’t until 2021 and after Zoe’s divorce that they were romantically linked.

While they remained very private on their relationship at first, it wasn’t long before Channing – who previously dated Jessie J – was following Zoe fan accounts on Instagram.

As of January 2023, they’re still going strong, with Zoe previously hailing her boyfriend her ‘protector’ and a ‘wonderful human being.’

This one just instantly makes us say, ‘Aww!’ because Zendaya and Tom Holland are seriously cute together.

Having mastered the whole ‘private but not secret’ thing, the lovebirds tend to keep themselves to themselves, but any slight Instagram mention or red carpet interaction we get sends fans into a frenzy.

The actors sparked romance rumours back in 2016 and their chemistry was undeniable in the Spider-Man flicks, but it wasn’t until 2021 they actually confirmed they were together.

We’ll likely never know how love actually blossomed between the pair, but we’re so hoping it lasts.

Yeah, this happened. During an interview with Howard Stern in 2015, Madonna left everyone’s jaws on the floor by revealing that she once dated Tupac Shakur.

The couple got together in 1993 but, in a love letter written in 1995, the rapper admitted to dumping her because she is white.

Macaulay Culkin and Mila Kunis actually dated for a hot minute – from 2002 until 2011, to be exact.

Of course, it’s now almost impossible to imagine the Black Swan actress with anyone other than Ashton Kutcher, but she was previously loved up with the Home Alone child star.

After meeting while she was 18 and he was 21, Mila later admitted that they had a ‘terrible’ break-up/

Well, we couldn’t mention Zoe Kravitz and not her famous dad, right? As Lenny Kravitz dated Nicola Kidman between 2003 and 2005.

Not only that, but they were even engaged!

They called it quits after two years, though, but Nicole later assured there was no bad blood and she had a lotta love for the musician.

Grimes and Elon Musk really was a moment in time, huh?

The pair made their debut at the Met Gala after they started dating in 2018.

The couple broke up in September 2021, but Grimes – real name Claire Elise Boucher – has described their relationship status as ‘very fluid.’

A member of The Wanted loved up with Arian Grande? Stranger things have happened!

Pop stars Nathan Sykes and Ariana were smitten with one another back in 2013, and the chemistry translated into their music, as they collaborated on songs Almost Is Never Enough and Over and Over Again.

However, in December that year, they split due to the long-distance sitch, remaining friends.

They first met at Madonna and Sean Penn’s wedding in Malibu, but didn’t get together until years later after connecting in a meeting at the White House.

It’s not known why they parted ways, but their romance was short.

There was nothing bitter about their split, though, as Cher later said Tom was one of her top five lovers!

Let’s end with this gem, shall we? Sinitta and Brad Pitt which is, easily, one of the weirdest celeb couplings ever.

The So Macho hitmaker dated the Hollywood actor back in the 1980s, but broke up in 1988 due to long distance.

Long before the days of her X Factor guest judging and wearing iconic leafy ensembles, Sinitta tried her best to make things work, but it seemed things were only working one way.