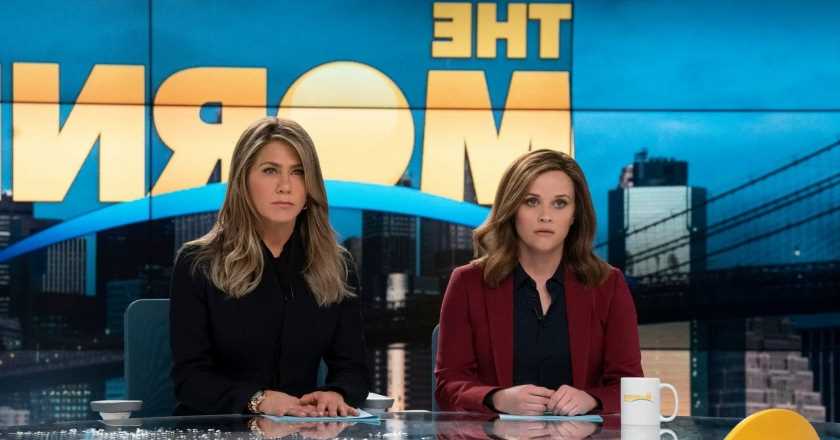 Jennifer Aniston and Reese Witherspoon are returning to our screens for a second season of hit Apple TV series, The Morning Show.

Award-winning series The Morning Show positively blew viewers away when it launched on Apple TV in 2019. And now, at long last, we’ve finally been offered our first proper look at the show’s second season.

First, though, for those who need a quick reminder of what’s happened in the story so far, it’s worth noting that the award-winning first season of the series saw news anchor Mitch Kessler (Steve Carell) sacked following several allegations of sexual misconduct – a scandal that was swiftly covered up.

This resulted in his steely co-presenter, Alex (Jennifer Aniston), fighting to keep her own job – not to mention battling a rivalry with Mitch’s fiery replacement, impulsive field reporter Bradley Jackson (Reese Witherspoon).

Reese Witherspoon and Jennifer Aniston in The Morning Show.

However, the series ended on an entirely unexpected cliffhanger when Alex broke down live on-air as she joined forces with Bradley to expose the scandal and the UBA network’s creation of a toxic culture.

Now, Apple TV has shared a full-length trailer for season two. And, just as fans of The Morning Show have long been hoping, it picks up exactly where the first left off; UBA’s national feed has cut to a test pattern following Bradley and Alex’s announcement, and…

Well, and see for yourself:

“Picking up after the explosive events of season one, season two finds the Morning Show team emerging from the wreckage of Alex and Bradley’s actions, to a new UBA and a world in flux, where identity is everything and the chasm between who we present as and who we really are comes into play,” promises the show’s official synopsis.

Judging by what we’ve seen in the trailer, it seems UBA is desperate to get Alex back on board (despite her very publicly leaving the Morning Show)– and a rift between our two heroes has left them utterly divided.

The Morning Show season 2: everything we know about the return of Apple TV+’s hit show

Elsewhere, Mitch is desperately trying to reconcile himself to his new role as an exposed abuser (“I just wanted to be liked,” he says bleakly), while several ominous hints are dropped about another dark “truth” being exposed.

And, going on Alex’s shocked expression as she checks an update on her phone, it seems this dark “truth” may have something to do with her.

Joining the cast for the show’s second outing are Greta Lee as ‘Stella Bak,’ a tech world wunderkind who has joined the UBA executive team; Ruairi O’Connor as Ty Fitzgerald, a smart and charismatic YouTube star; Hasan Minhaj as Eric Nomani, a new member of the Morning Show team; Emmy Award-winner Holland Taylor as Cybil Richards, the savvy chairwoman of the UBA board; Tara Karsian as Gayle Berman, a news producer; Valeria Golino as Paola Lambruschini, a documentary filmmaker; and, Emmy and SAG Award-winner Julianna Margulies as Laura Peterson, a UBA news anchor.

All of that, plus that chill-inducing trailer, means we are counting down the days until The Morning Show’s return on 17 September 2021.

06/14/2021 Entertainment Comments Off on The Morning Show is back with a new trailer, and it is *chilling*
Recent Posts