Throughout my time working in restaurants, I developed an illogical dread of some basic kitchen tasks. None of them — picking and chopping parsley, peeling and mincing garlic, browning pans of ground meat — were particularly difficult. But at the scale required in a professional kitchen, they felt Sisyphean. And even though it has been years since I worked in a restaurant and I now cook for one, two, sometimes maybe eight, rather than 100, the dread still plagues me. But once I get going, I am a goldfish, invariably surprised that chopping, browning or peeling for a handful of people takes barely any time.

I get an especially acute case of agita at the thought of a mortar and pestle. The chefs who taught me to cook worshiped the tool, and I learned to make everything from mayonnaise and guacamole to masala and bread crumbs using it. But despite loving how empowering it was to be liberated from electric appliances, pounding bunches of basil, heaps of pine nuts and a dozen cloves of garlic in a mortar to make a gallon of pesto felt like torture, or maybe a weird hazing. Even that simple recipe could take all afternoon, because the bowl’s limited capacity meant I had to thump multiple batches of nuts and herbs. I was left with a splattered apron and a very sore arm.

Even after I left the restaurant, I dreaded making pesto — which means “pounded” in Italian — in the traditional manner. Over the years, I tweaked my method in an attempt to speed up the process. I pounded the nuts in the mortar, but I made a basil-garlic oil in a blender, and then combined both in a bowl with plentiful grated cheese. Or sometimes I just dumped all the ingredients into my mini food processor and blasted the living daylights out of them, ignoring my better knowledge that extended blending would oxidize the fragile basil and the machine’s tiny blades would never properly break down the nuts.

But then last year I traveled to Liguria, a northwestern region of Italy, to document the olive raccolta, or harvest, for my television series. Smooth, sweet and buttery, Ligurian olive oil barely resembles its more typically exported Tuscan cousin, which tends to be grassy and peppery. And because I was going all the way to Liguria, the proud birthplace of basil pesto, I wanted a lesson with a lifelong pounder to see if I could come to understand why pounding is unequivocally superior to blending. A friend nominated her mother-in-law, Lidia Caveri, who offered to host me at her family home in Moneglia, a tiny coastal village in an area best known for its olive oil and beaches. 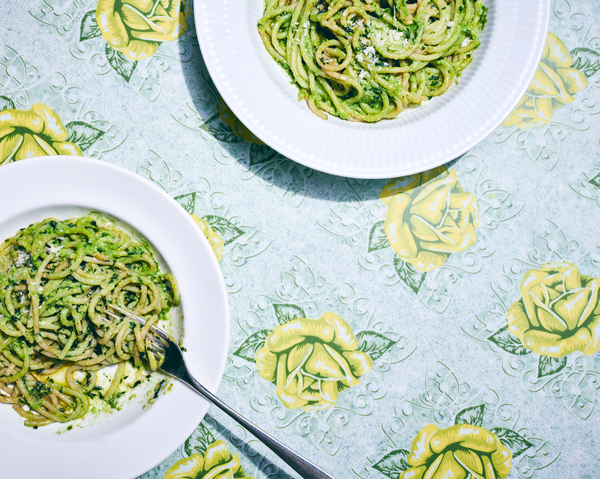 Silk scarf tied around her neck just so, Caveri proudly showed off her marble mortar, which her great-grandmother acquired sometime before 1870. And then we got to work. She started with a handful of pine nuts, left raw to preserve the faint sweetness that recedes with toasting. With the kind of elegance only a chic Italian grandmother can lend to bashing small, slippery nuts, she pounded them into a paste that resembled a pale, creamy peanut butter. Then she added a couple handfuls of tender Genovese basil leaves, a clove of garlic and some coarse salt to provide the friction needed to break everything down. She kept pounding and grinding. As the basil disintegrated, releasing its exquisite aroma, the sauce began to transform in a way I’d never seen. Before Caveri had even added any olive oil, the oil from the nuts began to blend with the minuscule amounts of water the basil leaves released. The constant rap of the pestle jostled the two into a emulsion, neither oil nor water but a creamy third thing made of both. I’d only ever considered pesto to be a cousin of herb salsa, made of distinct ingredients, each broken down separately and then combined into a loose, oily condiment. But the way Caveri was working everything together in the mortar at once, I realized pesto was something else entirely: a thick, creamy sauce.

“It’s just a question of patience,” Caveri, 73, said in Italian, continuing to pound and stir with the pestle as the afternoon sunlight bounced off her rings. She confessed that my request for a cooking lesson had prompted her to resume using her mortaio after years of using a blender, or buying prepared sauce. “No one makes pesto like this anymore,” she said. Caveri’s soft hums of pleasure, a sign of approval in the universal language of grandmothers, made my heart jump.

Next, we stirred in the cheeses — two parts Parmesan to one part saltier pecorino — and began to drizzle in oil Caveri and her family pressed from homegrown olives a month or so earlier. Caveri never stopped stirring, and the pesto continued to reveal just how creamy it could get. We tasted for salt, cheese and garlic, but the sauce didn’t need much tweaking — it was extraordinary. “It’s starting to give me satisfaction,” Caveri said, using a phrase that’s indescribably more meaningful in Italian than in English. I beamed. The entire process took about eight minutes. Maybe 10. The pot of pasta water we put on before we started hadn’t even come to a boil yet. Once it did, we cooked trofie, the corkscrew shaped pasta traditionally paired with pesto in Liguria, and stirred in spoonfuls of sauce, a little pasta water and a few more drops of Caveri’s oil. As we mixed it all together, the thick sauce coated the noodles in a way I’d never seen pesto do. I took a bite. It tasted as it looked — like a unified whole, greater than the sum of its parts. Whereas every other pesto I’d ever eaten gradually separated into its individual components as I made my way through a bowl of pasta, leaving a puddle of flavored olive oil behind, this sauce — creamy, nutty, fragrant and sweet — clung to the trofie. It was a revelation.

I knew then that I could never make pesto any other way. In the year since, the mortar has taken up permanent residence on my countertop, and I haven’t been tempted once by the food processor. I recently visited Caveri again, and asked if she’d been converted as well. “I prefer the mortar,” she said. “It enhances the scent of the basil and garlic. But when my whole family — more than 20 of us — gather, I do give in to the temptation of the blender.”

11/07/2018 Entertainment Comments Off on The Key to This Creamy, Thick Pesto? A Mortar and Pestle.
Recent Posts