We all know it.

The enchanting melody of “The Dance of the Sugar Plum Fairy” from Tchaikovsky’s “The Nutcracker,” which returns to New York City Ballet on Friday for its annual run through Dec. 30, has transcended ballet to become shorthand for Christmas itself.

Despite the tune’s ubiquity, it never gets old for Andrew Litton, City Ballet’s music director, who will lead the company’s orchestra in some of the “Nutcracker” performances this season. Asked about his favorite page from the ballet’s score, he chose the Sugar Plum Fairy’s solo.

“I’m actually in love with the whole two hours,” he said in an interview this week at Lincoln Center. “I’m only conducting seven of the performances, but the seventh will feel just as great as the first.”

With “The Nutcracker,” Mr. Litton said, Tchaikovsky achieved the rare feat of writing music that was endlessly enjoyable yet revolutionary. “The Dance of the Sugar Plum Fairy” was one of the earliest uses of the celesta, an instrument that became so popular it appealed to both Frank Sinatra and the composer John Williams, who exploited its ethereal timbre for “Hedwig’s Theme” in the “Harry Potter” films.

The score is often presented as an orchestral suite, but it’s not unusual to hear it performed it in its entirety — about 90 minutes without an intermission. Valery Gergiev recently led “The Nutcracker” with the Mariinsky Orchestra at Carnegie Hall, and Deutsche Grammophon just released a joyously vibrant recording by the Los Angeles Philharmonic under Gustavo Dudamel.

For all the magic of the Sugar Plum Fairy on the page, Mr. Litton said, her dance is made even better by George Balanchine’s choreography for City Ballet. The ballet may be a yuletide standard for theaters around the world, but its premiere in 1892 was a flop. Balanchine was among the choreographers who led a “Nutcracker” resurgence in the mid-20th century.

His version, which has been performed at City Ballet every year since 1954, is famous for its magical sets and stage effects, like the Christmas tree that grows several stories tall. But beyond that, Mr. Litton said, Balanchine elevated “The Nutcracker” beyond its musical greatness.

“He makes Stravinsky better than Stravinsky,” Mr. Litton said, referring to the long relationship Balanchine had with that composer. “So many of the pieces we do are just enhanced and made better by Balanchine.”

Mr. Litton spent decades in the world of symphony orchestras before he became City Ballet’s music director — fittingly, during “Nutcracker” season in 2015. But it’s one thing to conduct in a concert hall, and quite another to lead a ballet orchestra. The City Ballet players are valued for their attention and agility: Tempos change from night to night, from dancer to dancer. 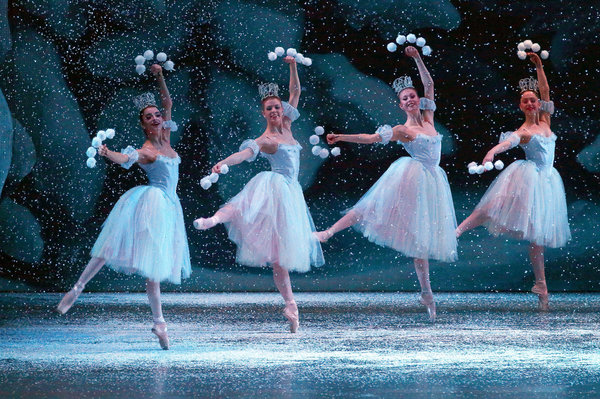 “I always tell them, ‘Don’t assume,’” Mr. Litton said. “Sometimes I warn the front desk strings that the next night is going to be much slower. When I say that, I mean two clicks of the metronome, but that’s a lot to a musician.”

The orchestra typically has just one rehearsal, and often not with the dancers onstage. “It’s not like opera,” Mr. Litton said. “We only have the luxury of that when it’s something new or unusual that requires a lot of stage-orchestra cuing, like ‘Fancy Free.’”

“The Nutcracker” is one of those ballets that requires time in the auditorium, because the dozens of children in the cast require more rehearsal time. Mr. Litton has a soft spot for them, and for the youngest members of the audience.

“I was dragged to this building so many times as a child to see this,” said Mr. Litton, who grew up on the Upper West Side of Manhattan. In the interview, he described what it’s like to perform for children, and why he particularly loves “The Dance of the Sugar Plum Fairy.” Here are edited excerpts from the conversation.

You chose the quintessential Christmas tune.

But I get the biggest kick out of it. It’s so amazing because Tchaikovsky just had this brilliant idea to get the effect that [the choreographer Marius] Petipa wanted with the celesta.

Can you describe the character of this instrument?

For centuries, people had been looking for a keyboard instrument that would hit bells. With harpsichord, it was plucking strings; piano, it was hammers hitting strings. The celesta uses felt hammers to hit the bells. It’s a much more smooth and beautiful sound. The inventor called it celesta because “celestial” — heaven. He thought it sounded heavenly.

Tchaikovsky discovered the celesta, which had been invented in the 1880s, on a trip to France. He wasn’t the first composer to use it in an orchestral piece, but he was the first person to give it a massive solo. It proved to be such an influential move. From that moment on, the floodgates opened. Everyone wrote for celesta.

How does this dance and the rest of “The Nutracker” compare with Tchaikovsky’s other ballet scores?

It’s his last ballet. He didn’t really like the idea of the project, but he obliged. And it ended up being one of his most successful pieces. It’s ironic that it was approached with such reluctance. So often that seems to happen in history.

“The Sleeping Beauty” is the ultimate dancer’s ballet. But musically, it perhaps doesn’t have the inventiveness that “The Nutcracker” does. It’s also an hour longer. When a composer has a smaller template, it forces an inventiveness. “Waltz of the Flowers” may be the longest number, and it’s under six minutes.

I put the “Waltz of the Flowers” up against any waltz written by anybody. It’s certainly one of the top five waltzes of all time, and I include all of the Strauss family in that sweeping statement. And the great theme of the pas de deux, which might be lost on the children, was written on a dare. Someone said, “I bet you can’t write a melody that’s just a scale.” But there it is; it’s incredible. We also have his Russianness coming out in the Trepak. And the overture is not for the whole orchestra; it’s for the upper strings. By doing that, he takes us into this world of tiny tots.

There’s a lightness to it.

A total lightness, which is a brilliant idea. Then, as soon as the curtain’s up, we see grown-ups — the parents, the grandparents. So it’s back to normal orchestration. It’s a genius stroke.

How is it different to play to a younger audience?

There are hazards. There was a performance last year where a little child sat on his grandfather’s lap right behind me. He had this huge bag of M&Ms. The whole time I could hear this chomping. You can’t say, “Please stop eating those.” Then I kept thinking: “Surely, that’s enough. He’s going to be sick. Oh no, he’s going to be sick on me.” So, it’s a little distracting. The ballerinas look at the conductor, and they were all distracted, too. Normally that just doesn’t happen. There’s crying, but this is the piece for it. You don’t bring kids to Mahler’s Ninth.

One of the mantras of classical music is that there’s no new audience. Well, we get one every season with this piece. Every child from New York, every child who visits, experiences this if they’re lucky. It’s so fun to go out every night and know you’re going to reach some of these little kids. Some of them will squirm through it. But some will be transformed by it.

11/23/2018 Entertainment Comments Off on The Genius of ‘The Nutcracker’? It’s the Sugar Plum Fairy.
Recent Posts