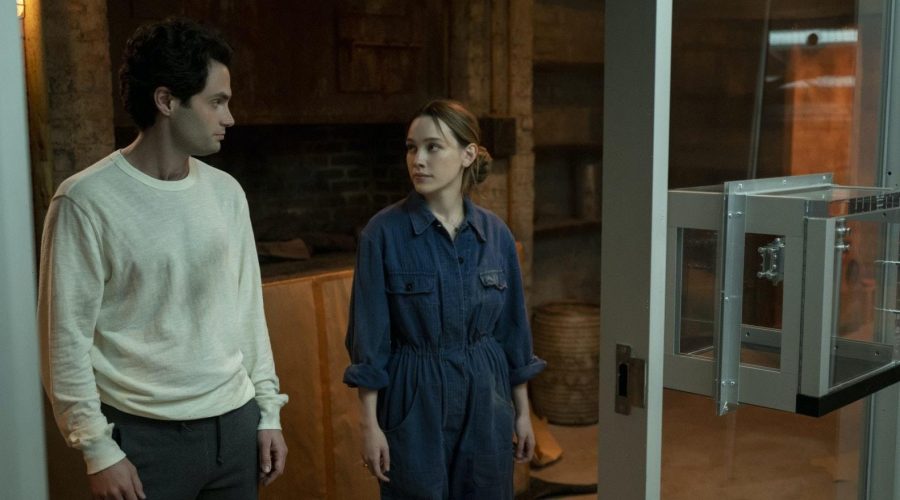 Netflix has finally revealed when You season three will land on the platform, as well as releasing a series of first-look images and an ominous teaser trailer. But what can you expect from the new series? Here’s everything we know so far.

Warning: this article contains spoilers for the first two series of You.

Updated 1 September: In the same week that Netflix treated fans to an official release date and teaser trailer for You season three, the streaming platform has unveiled a collection of first-look images from the new series – and they’re just as chaotic as you might expect.

But if the first-look images are anything to go by, fatherhood hasn’t changed Joe one bit – he’s pictured wearing a baby carrier while donning his signature blue stalking cap.

You season three: fatherhood doesn’t seem to have changed Joe one bit.

This blue cap isn’t the only sign Joe hasn’t changed, however. In another picture (the one at the top of this article), Joe and Love are shown standing outside Joe’s creepy glass box (you know, the one where he locks up his victims).

Could this be a sign that he and Love have captured someone else? And if so, could their new victim be Marienne (Tati Gabrielle), the librarian Joe is show speaking to in the image below?

You season three: could Marienne (Tati Gabrielle) be Joe’s next victim?

While the rest of the first-look images are more ‘normal’ (see below) – they show Joe and Love looking at their baby son, a group of people talking to Love in a café, and Scott Speedman in his role as Matthew Engler (who looks like he could be the couple’s neighbour) – it’s clear that You season three will be just as jam-packed and chaotic as the previous two.

As reported on 27 April: As if the first two seasons of Netflix’s thriller series You weren’t wild enough, the show’s boss has confirmed that season three will be “fucking bonkers” in an exciting new update.

Taking to Twitter to share the news that filming on the show had finally wrapped, You’s showrunner Sera Gamble praised the show’s cast and crew for staying safe while shooting during the coronavirus pandemic – and treated fans to a small hint about what they can expect from the upcoming third season.

“I feel privileged to have gotten to witness everyone’s creativity, resilience and kindness,” she said. “I mean, I knew our team was tough and good at their jobs, but holy shit did everyone show up for each other.”

Gamble continued: “Also, the episodes are fucking bonkers and the performances are insanely good. That’s all I’ll say about that till we are ready to talk about the new season.”

Elsewhere, the show’s official Instagram account also marked the end of shooting with a shot of Penn Badgley (who plays the ever-so-creepy Joe in the series), sitting on a chair with the label “stalker” across the back.

“Don’t worry we have eyes on Joe at all times,” the caption read. “Happy S3 wrap.”

With production on the series delayed last year thanks to the coronavirus pandemic, the news that filming on You season three has finally completed is seriously exciting.

Keep reading to find out everything we know about You season three so far.

Is there a trailer for You season 3?

Yes! At the end of August, Netflix released an ominous teaser trailer for the new series, revealing the name of Joe and Love’s new baby, Henry.

“Choosing your name is the first of a lifetime of decisions I’ll make to give you the best life possible. To protect you, to shape who you will become. Who are you going to be?”

Who is in the cast for You season 3?

There is a long list of new faces joining the You cast for season three.

After confirming that You was back in production last November, Netflix revealed the names of 12 new cast members who will join Penn Badgley and Victoria Pedretti (who plays Joe’s season two love interest, Love) on-screen – including three who will become series regulars.

One of these new regulars is Tati Gabrielle (Chilling Adventures of Sabrina), who plays Marienne, “a smart, no-nonsense librarian who doesn’t let much get by her”.

As per Variety, her character description reads: “Marienne is a keen observer of the neighbourhood’s denizens, too savvy in the ways of the real world to be taken in by patrons’ privilege and obvious entitlement. Beneath her practical, buttoned-up exterior, Marienne is hiding personal struggles that continue to set her back, hard as she tries to create a better life for herself and her young child.”

Starring alongside Gabrielle will be Dylan Arnold (Nashville) who plays Theo, a college student with “a strained and complicated relationship with his stepfather” and Saffron Burrows (Agents of S.H.I.E.L.D.) who will return as Love’s mother, Dottie.

And appearing as the subject of Joe’s “growing fascination” will be Michaela McManus (The Vampire Diaries) as Natalie, “a professional and social success” who leads a “secret life”.

You season 2 review: Netflix’s stalker series has an important message about obsession – and desire

And of course, we can expect Penn Badgley’s eternally-creepy serial killer Joe Goldberg to make a reappearance in season three – and alongside him, The Haunting of Hill House’s Pedretti will reprise her role as Joe’s similarly murderous – and now pregnant – girlfriend, Love Quinn.

What will You season 3 be about?

When it comes to the plot of You season three, it’s all speculation at this point – especially when you consider the fact that this season will stray further from the show’s source material: Caroline Kepnes book series of the same name.

While seasons one and two of You were based on Kepnes’ two-book series (made up of You and Hidden Bodies), season three has been produced at the same time as Kepnes has been writing the third book in the You series, meaning there’s likely to be some big differences.

What will You’s Joe and Love get up to now they’re expecting a child?

Indeed, the ending of the show’s second season – which landed on Netflix on 26 December last year – was all kinds of mind-blowing. Just when we thought Joe had (kind of) moved on from his creepy, I-will-make-you-love-me-at-all-costs obsessive behaviour for a little bit, he lays his eyes upon his new victim: his next-door neighbour.

“This is where I had to be, exactly where I had to be to meet you,” Joe says in an ever-so-creepy voice over in the closing moments of season two. “There you were, with your books and your sunshine. So close, but worlds away. I will figure out a way to meet you. See you soon… neighbour.”

With that ending leaving us hungry to know more about what exactly is going to happen next, we can’t wait to see what’s in store (besides the inevitable killing, of course).

When and where will You season 3 be released?

The recent teaser trailer revealed that You season three will land on Netflix on 15 October, so we don’t have long to wait.

With not long to wait until the show drops on Netflix, excitement for You season three is officially building – and we can’t wait to get our hands on the latest instalment in this gripping series.

In the meantime, you can rewatch seasons one and two of You on Netflix now.