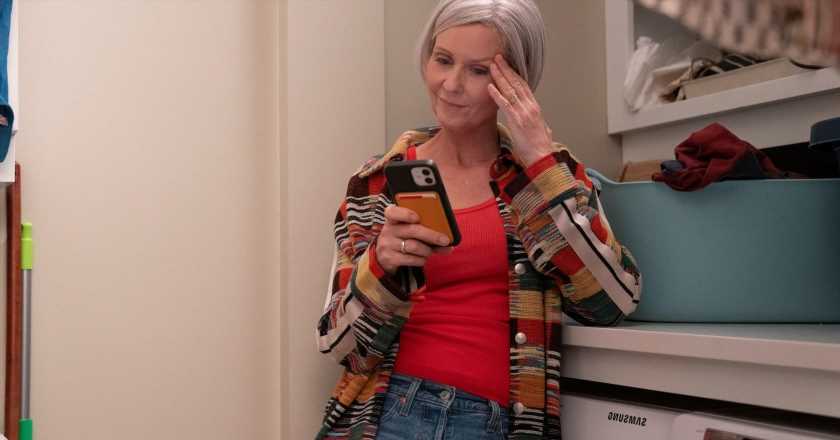 Miranda Hobbes is fully exploring her queer identity in the latest episode of HBO Max’s And Just Like That – and the directorial decisions reveal Cynthia Nixon is fully in control of her narrative.

It’s fair to say that HBO Max isn’t holding back with the storylines in the Sex And The City revival, And Just Like That. Charlotte daughter’s Rose –who now goes by the name Rock –is questioning their gender identity. Anthony is getting a divorce. Samantha has moved to London for work and cut ties with the girls. Carrie has had a pretty rough deal, all things considered, having weathered hip surgery, a house move, and the not-so-insignificant demise of her husband in her new chapter.

As for Miranda… well, where do we begin? In just six episodes, the silver-haired attorney has embarked upon a master’s degree in human rights, caused offence in practically every way possible to her new professor, struggled with alcohol addiction, and had a life-altering queer awakening.

Facelifts, fantasies and one major fallout between friends: everything we learned from episode 6 of And Just Like That

Yes, Miranda’s storyline is the one that everyone is talking about. After several slow-burn encounters, in the fifth episode of And Just Like That, Miranda’s crush on queer, non-binary comedian Che Diaz (Sara Ramírez) culminated in a tequila-fuelled make-out session in Carrie’s kitchen in which her sexuality was definitely explored. Am I still thinking about it? Yes, I am.

It would be all-too simple to read Miranda’s discovery of her queer identity as an attempt to inject some drama in the reboot. In fact, the storyline reflects the reality of Cynthia Nixon’s own late-in-life awakening as a queer woman. Now married to Christine Marinoni, Nixon is no longer the same woman who starred in the original Sex And The City series, just as her character is no longer the same woman who once emphatically denied that she was a lesbian.

And Just Like That: Sara Ramirez as Che Diaz and Cynthia Nixon as Miranda Hobbes

Intriguingly, by the time the credits roll around, we find out that Cynthia Nixon actually directed the episode, which brings a whole new level of meaning to Miranda’s story. In fact, this episode marks Nixon’s official directorial debut.

Miranda’s queer storyline in And Just Like That is finally reflecting real life, and it’s everything

Why is this significant? Well, for a start, this episode is explicitly queer. We might have been granted the first sex scene of the series last week, but episode six portrays Miranda in a totally new headspace. No longer is she vaguely curious, smiling uncertainly and flirting like a giggling schoolgirl: she’s having graphic fantasies over and over again. There’s no question now that her mind is fully set on Che Diaz in a sexual way.

And Just Like That: the sexual tension between Che Diaz (Sara Ramirez) and Miranda Hobbes (Cynthia Nixon) comes to a head in episode 5

That Nixon chose to direct this episode means that she also choreographed these fantasies, which suggests that she wanted agency over how her iconic character’s relationship with her sexuality evolved. It suggests a personal connection to the storyline, and a desire to see it played out on screen in a way that feels truthful to her own experience.

It’s also meaningful that a queer actor got to direct her character’s burgeoning queer identity behind the camera. LGBTQ+ representation rarely feels truthful when those producing the narratives of queer characters are straight and cisgender, so that in itself feels like a huge win.

Nixon echoed these sentiments in an Instagram post celebrating her directorial debut. Sharing a series of photos of herself behind the camera, she thanked the cast and crew who had given her the opportunity to “both look back and move forward.”

“To the incredible cast and crew: thank you for welcoming me with such open arms to take a seat in the director’s chair,” she began, before naming series creator Michael Patrick King, and directors and cinematographers Shariffa Ali, Wylda Baron and Tim Norman for their support and inspiration.

Facelifts, fantasies and one major fallout between friends: everything we learned from episode 6 of And Just Like That