The dance-on piano, immortalized by Tom Hanks in the movie “Big,” is back. So are the toy soldiers in towering black hats and the theme song “Welcome to Our World of Toys.” There is even a flagship store in New York.

F.A.O. Schwarz, the famed toy seller that closed three years ago, has been reincarnated. But it isn’t the same.

The new owner, ThreeSixty, a private equity-backed company, wants to avoid the problems that befell its previous owners. The large network of stores. The vast supply of toys that can be hot one moment and cold the next. 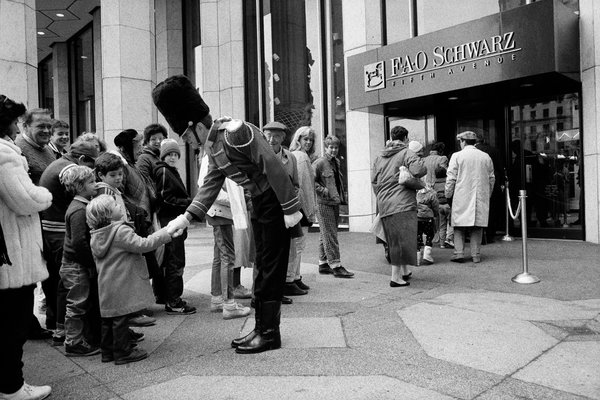 Instead, F.A.O.’s new owners are creating thousands of “stores within stores” at other large retailers as well as small stores in airport terminals and other locales across the United States and in China. The new locations will be stocked heavily with F.A.O.-branded stuffed animals and toys. To modernize the brand, the New York store will feature “Instagrammable moments” and soldiers’ uniforms designed by the supermodel Gigi Hadid.

ThreeSixty is essentially trying to replicate the F.A.O. Schwarz experience, while minimizing the costs of personnel, real estate and inventory. Other than its new flagship store in New York’s Rockefeller Center, many of the other locations will be owned and operated by other companies, while F.A.O. will collect franchising fees.

“This is not bringing back a great toy store,” said Kate Clark, founder and president of Yottoy, a small toy company that makes stuffed animals based on classic children’s books like Paddington and Corduroy. Ms. Clark sold her stuffed animals to F.A.O. Schwarz, under its previous ownership, but is wary of the company’s new business model. “It feels like they have created a shell.”

Founded in Baltimore in 1862 by Frederick August Otto Schwarz, a German immigrant, his namesake brand was a must-see in Manhattan for decades.

Its former store in the General Motors Building on Fifth Avenue offered a sprawling showroom of life-size stuffed wolves and giraffes, candy and outrageously expensive novelties like the jeweled Etch-A-Sketch made from more than “10,000 dazzling handset sapphire Swarovski crystals.” Movies like “Big” and “Home Alone 2” glamorized the store in the imaginations of millions of children as a magical place full of wonder and fun.

Over the years, F.A.O. went through a revolving cast of owners: A hedge fund, a magazine publisher and a Dutch department store owner. Most recently, F.A.O. was unable to adapt to e-commerce, and its parent company until 2016, Toys “R” Us, had its own serious troubles.

By the time ThreeSixty bought the brand two years ago, the Fifth Avenue store had already closed.

“It’s exciting to be part of history,’’ said David Conn, who is running F.A.O. for the ThreeSixty Group.

The new Rockefeller Center store, which opened in November, is selling popular toys like Barbie and Paw Patrol, which are produced by big companies, as well as classic European brands like the plush Steiff elephants and bears from Germany. There’s a Build-A-Bear Workshop, Brio trains and Ravensburger puzzles.

ThreeSixty is giving its own brands a big push, too. The store sells robotic dogs and Laser Tag from Sharper Image, another struggling brand that ThreeSixty is trying to revive.

About 40 percent of the New York store is F.A.O.-branded products. ThreeSixty runs a sourcing operation in China that can produce the branded toys at lower costs, which will bring higher margins in its stores and online.

On the first floor, there is a large assortment of wooden toys produced by Melissa & Doug, a toy company backed by the same private equity firm, AEA Investors, that is invested in the ThreeSixty Group.

“This was not just driven by our business model,” said Mr. Conn. “It has to do with what assortment of toys we want in our store and who we want to partner with.”

F.A.O. is treading cautiously at a perilous time for retailers. Toys “R” Us, another private equity-owned toy retailer, liquidated in June and shuttered all 730 locations across the country. Saddled with debt, Toys “R” Us could not keep up with the expenses of running its stores, paying tens of thousands of employees and managing a sprawling supply of toys to keep up with the fickle tastes of its young customers.

F.A.O.’s new approach may prove more profitable, but it has left some manufacturers despairing about the future of toy stores.

Typically, retailers pay for goods up front and then work to market them in their stores or online. Small companies depend on retailers to take a bet on their products so they can keep growing and experiment with new ideas.

But some toy companies were told that F.A.O. would not buy their inventory, according to multiple toy company executives and the industry association. Rather, some manufacturers said they could essentially rent space to display their toys in the store and were on the hook if the toys did not sell.

“They are not acting like a retailer that takes risk and is buying product,’’ said Richard Yanofsky, co-founder of WowWee, which produces the robotic Fingerlings, one of the hottest toys last Christmas.

“We opted out this year,’’ Mr. Yanofsky added. “But if it gets legs, maybe we will try to get in next year.”

Some toymakers are especially leery of that deal after getting burned by Toys “R” Us. Many manufactures agreed to ship products to Toys “R” Us after it filed for bankruptcy in September 2017. The retailer told the toy companies it would eventually pay them, but it never made good.

Ms. Clark estimates she lost “hundreds of thousands” of dollars for products Toys “R” Us never paid her for.

F.A.O.’s private equity owners are betting on the nostalgia factor. Through its many iterations, Mr. Conn said his research showed that the F.A.O. brand still resonated with customers.

“We have people break down in tears of joy when they remember their first visit to the old store,” said Mr. Conn, who worked for years with consumer brands like jeans, but never with toys.

ThreeSixty wants its employees to bring a sense of “theater” when interacting with customers. Prospective hires, including cashiers and employees in charge of IT, had to audition for their jobs on stage at an Upper West Side theater earlier this fall.

The New York store is meant to serve as a “blueprint” for how stores should operate. The company is planning to train franchisees in China on how to set up a store, including holding auditions as part of the hiring process.

“I see it doing well with tourists,’’ said Jim Silver, who runs a toy review website. “But most kids are not buying toys based on what they see in a store, but what they see online.”

For Ms. Clark, the toy company owner, none of these efforts can bring back the kind of store where Tom Hanks danced on the piano like a child.

“Consumers may be holding onto the concept of that toy store in ‘Big,’’’ she said. “But there is no store anymore that gives off that kind of love.”

Michael Corkery is a business reporter who covers the retail industry and its impact on consumers, workers and the economy. He joined The Times in 2014 and was previously a reporter at the Wall Street Journal and the Providence Journal. @mcorkery5

11/22/2018 Entertainment Comments Off on The F.A.O. Schwarz Piano Is Back — but With a Different Tune
Recent Posts