In this series for T, Emily Spivack, the author of “Worn Stories,” interviews creative types about their most-prized possessions. Samin Nosrat is the best-selling author of “Salt Fat Acid Heat” and host of the new Netflix series of the same name. Here, she describes helping throw an ambitious barn party and the sheepskin she was given as a thank-you gift.

This sheepskin is from an Icelandic sheep my friend Sarah Ryhanen raised on her farm in upstate New York. Sarah is this visionary florist, the Alice Waters of florists for our generation. To take things to the next level, she decided to buy a 100-acre farm to grow flowers and raise Icelandic sheep, one of the few breeds that is great for their skins, meat and milk.

Three years ago, Sarah and her partner had to cull their flock for the first time. That October, a local guy who does the slaughtering and butchering came over. Sarah and her partner decided to have a lamb roast — their first party on the farm — both because they’d culled the lambs and because they’d finally renovated the barn enough to invite people to sit down at tables. I told them I’d come out from the West Coast and cook.

The farm is gorgeous but very bare-bones. They didn’t have a kitchen, so we essentially built a rudimentary outdoor one. We cooked everything over fire using oil barrels and dragged over a hose so there’d be running water. We harvested Sarah’s vegetable garden and made a delicious salsa from all the green tomatoes and a huge green salad using all the kale. I’d never cooked squash under coals, but I made a coal bed and stuck the squash in there. I made lamb asado. 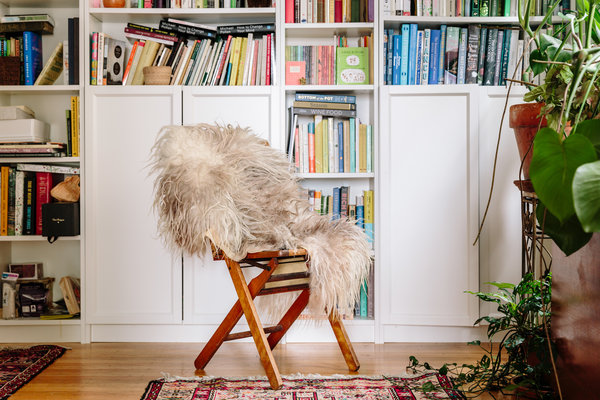 Cooking for my friends is where I really bring it. Same thing, I think, with florists like Sarah. When you get hired for a job, it’s one thing, but when you get to do it for yourself, you put all your crazy ideas into practice. We were able to do something that was really spectacular and beautiful. You can’t produce that magic on demand.

Sarah had built tables, made a gorgeous chandelier out of fall leaves from around the farm, used these little ears of Indian corn for name cards and bought a bunch of Civil War-era silverware from Etsy. She knew when to bring out the disco ball and speakers. We were people who knew how to throw a big party.

Around 75 or 80 people came, and we camped in tents on the property. It was this funny crew of people who were bonded by hard work, ultimately — the work to bring this artistic vision to life. There was no money, no magazine article, there was nothing — we were just doing it for ourselves.

My “payment” for cooking this meal was the sheepskin from one of the young rams they had culled. Sarah gave it to me the next time I visited the farm. She has this funny sense of humor, so they had named the lambs that year after “Top Gun” characters, and this guy was Iceman. It sits on the couch in my little apartment, and I’m grateful I get to experience it every day.

This interview has been edited and condensed.

Emily Spivack is an artist, writer, and editor whose column for T Magazine, The Story of a Thing, features interviews with cultural figures about objects in their homes.