Every month, streaming services in Australia add a new batch of movies and TV shows to its library. Here are our picks for February.

With all the social and political unrest around the world, now is as good time as any to revisit this refreshingly optimistic sitcom. Set in the dysfunctional Middle American city of Pawnee, the show stars the very funny Amy Poehler as Leslie Knope, a midlevel bureaucrat who motivates a community of skeptics and kooks into making their town more livable. Though “Parks and Recreation” mostly focuses on the relationships between its cast of lovable eccentrics, it’s also about how good-hearted and determined civil servants can make a difference.

Although the animated science-fiction/superhero series “Kid Cosmic” sprang from the mind (and the pen) of “The Powerpuff Girls” creator Craig McKracken, it looks and feels different from the work he’s done before. This is a more serialized adventure, featuring a group of misfits from a New Mexico desert town who rely on superpowered alien jewels to fight off invaders from outer space. “Kid Cosmic” has a remarkable design, with its loosely sketched lines and pale colors resembling fading old fantasy magazines and comic books.

Based on Kristin Hannah’s popular tear-jerker novel, “Firefly Lane” stars Katherine Heigl as a glamorous but lonely TV personality. Sarah Chalke plays her longtime best friend, whose own life as a wife and mother has recently been disrupted by divorce. The series frames these two women’s diverging situations as a kind of existential mystery. Frequent flashbacks to the characters’ teenage and young adult years allows viewers to make key connections between the troubles of the past and the anxieties of the present. 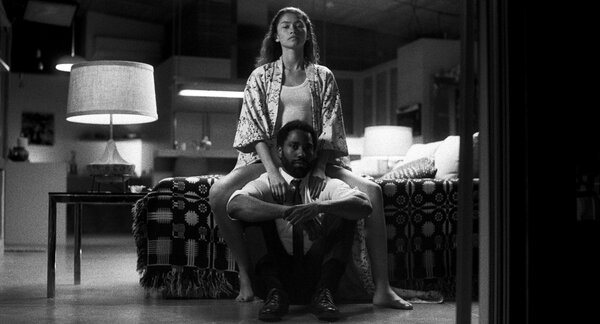 The writer-director Sam Levinson — best-known for the social satire “Assassination Nation” and the provocative teen drama series “Euphoria” — shot his intimate, two-character “Malcolm & Marie” during the pandemic. John David Washington and Zendaya play a bickering couple, airing their grievances over the course of one tense night. Levinson cenhances the stripped-down story by shooting his two striking-looking actors in handsome black-and-white, making a movie that echoes the low-budget psychodramas of the indie film pioneer John Cassavetes.

‘News of the World’

How did it take so long to get Tom Hanks into a western? In “News of the World,” Hanks plays Captain Jefferson Kyle Kidd, a veteran of the U.S. Civil War, who in the 1870s ekes out a living riding from town to town, reading newspapers to the locals. Helena Zengel plays Johanna, a preteen kidnap victim whom Kidd tries to return to her family. Based on a Paulette Jiles novel, this film has an episodic structure, designed to lead viewers through a tour of a postwar America still deeply divided. Hanks is the sturdy anchor for a winding story.

‘To All the Boys: Always and Forever’

In Netflix’s energetic and emotional movie adaptations of Jenny Han’s novel “To All the Boys I’ve Loved Before” and its two sequels, Lara Condor plays a lovestruck teenager named Lara Jean Covey, while Noah Centineo plays her college-bound crush Peter. Last year’s “P.S. I Still Love You” introduced some complications to the first film’s happy ending; and now the third and final part in the trilogy, “Always and Forever” tells the story of how Lara Jean and Peter handle an unexpectedly complicated transition from high school to college.

Don’t look for any sympathetic characters in J Blakeson’s “I Care a Lot,” a blackly comic neo-noir film in which two oddly charismatic creeps try to outwit one another. Rosamund Pike plays a high-class grifter, who exploits the systemic flaws in the elder-care industry to make money off the helpless. Peter Dinklage plays a drug kingpin living under an assumed name, who risks revealing himself when his mother (Dianne Wiest) gets caught up in the scam. Like Blakeson’s entertainingly nasty 2009 debut film “The Disappearance of Alice Creed,” this is a well-acted and twisty movie, made for audiences who enjoy watching clever folks be shamelessly awful.

This documentary about the legendary Brazilian footballer Edson Arantes do Nascimento, known as Pelé, is focused primarily on his four World Cup appearances, from 1958 to 1970. Between those years, he went from being an unknown teen from a poor São Paulo neighborhood to becoming universally acknowledged as one of the best ever. The “Pelé” directors Ben Nicholas and David Tryhorn have a wealth of exciting footage of the man in action, but their film is just as much about how Brazil and the world changed during the 1960s.

Fans of “Gilmore Girls” should find a lot to like about “Ginny & Georgia,” a drama about a precociously mature teenage girl (Antonia Gentry) and her more free-spirited and libertine mother (Brianne Howey), who are both adjusting to a new life in a quaint New England town. In a reversal of the “Gilmore Girls” premise — where the mom was born of privilege and then fled to a more middle-class existence — in “Ginny & Georgia” the family has seen hard times and is now striving for something better. The core of the show remains the often shaky relationship between a strong-willed parent and her equally headstrong child.

The archivists for Formula One auto racing have emptied out their vaults for this seven-part docu-series, which covers the past 70 years of the sport from multiple angles. Packed with original interviews and exciting vintage footage, “Race to Perfection” documents both the history and the evolution of various aspects of racing: from the advances in technology to the personalities of the drivers to some of F1’s most controversial incidents. It’s pitched at longtime fans and novices alike.

The writer-director Shane Meadows and the actor Stephen Graham are frequent collaborators, best known for their decade-spanning “This Is England” series. The pair reunites for the four-part mini-series “The Virtues,” a heavy drama about a man belatedly confronting childhood trauma. Graham plays an alcoholic whose life is in utter disarray when he returns home to reconnect with his estranged sister. The trip reminds him of incidents he’d long-suppressed, while also pushing him toward a woman (Niamh Algar) with issues of her own.

This thriller series’s title character should be familiar to fans of either the novel or the movie “The Silence of the Lambs.” The show is set one year after the events of “Silence,” and follows the FBI agent Clarice Starling (Rebecca Breeds) as she tackles new cases. Expect a mix of short and longer narrative arcs, splitting the difference between a traditional TV procedural and the more novelistic serialized approach. But don’t expect any direct mention of the infamous serial killer Hannibal Lecter; the character’s rights are owned by a different production company.

In its original incarnation, the 1980s sitcom “Punky Brewster” starred Soleil Moon Frye as an abandoned child, taken in by a cranky old widower and raised with the help of some kindly neighbors and teachers. Frye returns for the revival, playing Punky now as a quirky divorced mother, who upends her family’s life when she considers become a foster parent to a kid a lot like herself. Some of the original cast members will appear, in a series that aims to charm and uplift.

Owen Wilson plays a lonely, hopeless man named Greg in the writer-director Mike Cahill’s haunting science-fiction drama “Bliss.” Greg is experiencing a run of bad luck when he meets Isabel (Salma Hayek), who persuades him that they’re both actually living in a computer simulation. Cahill makes both Greg’s dreary “real” world and Isabel’s more utopian version seem equally valid, leaving the audience wondering until the end whether she’s savvy or crazy. Along the way, he raises pointed questions about whether humans need some kind of misery in their lives to achieve happiness.

‘Tell Me Your Secrets’

The lives of three very different characters — a woman on the run (Lily Rabe), a desperate mother (Amy Brenneman), and a sexual predator (Hamish Linklater) — intersect in this mystery/suspense series. As a crime from the past draws this trio closer together, they each reveal secrets about themselves they would’ve rather kept hidden, while also learning more about their friends and neighbors than they may have wanted to know. “Tell Me Your Secrets” is about the lies and delusions that sustain some people; and about what happens when they’re finally told the truth.

02/02/2021 Entertainment Comments Off on The Best Movies and TV Shows New to Netflix, Amazon and Stan in Australia in February
Recent Posts