Watching is The New York Times’s TV and film recommendation website. Sign up for our thrice-weekly newsletter here.

Freed from holiday obligations, we’re back to our regularly scheduled programming. Below are the most interesting of what we’ve found for new movies and TV series coming to the major streaming services in January, followed by a roundup of all the best new titles in all genres. (Streaming services occasionally change schedules without giving notice.)

‘Comedians of the World’
Starts streaming: Jan. 1, on Netflix.

Forty-seven stand-up comics from around the world trot out their best bits in this series of half-hour specials, which offers an excellent opportunity to sample new and diverse comedic voices. Want to get out of a sexually awkward situation? Aditi Mittal, who hails from India, has a foolproof excuse for you to try. Thinking of getting a Brazilian wax? The Canadian-American comic DeAnne Smith will slap that out of you. Didn’t think it was kosher to joke about H.I.V./AIDS? Loyiso Madinga (South Africa) thinks you should give it a try. Concerned about racial profiling? Nazeem Hussain (Australia) explains how he’s learned to use it to his advantage. It’s the funniest trip you can take without leaving your couch.
—

The director Guillermo del Toro knows nightmares — whether they be fantastical (here, the Pale Man, with eyes in the palms of his hands) or all too real (the fascism under the Spanish dictator Francisco Franco). A pensive little girl named Ofelia (Ivana Baquero) tries to navigate both kinds of horrors as her everyday world becomes tangled with a symbolic one. Watch out for the slime-spewing toads!
—

Debra Granik’s beautifully observed story focuses on a father (Ben Foster) and daughter (Thomasin Harcourt McKenzie, in a breakout performance) who are living off the grid in the wilds of a big nature preserve. Civilization isn’t very far away, however, and it begins to intrude, attempting to force this stripped-down family unit into a conventional lifestyle. The movie asks fundamental questions: What is “home,” and how important is community? The answers, like the two extraordinary leads, are deeply moving.
— 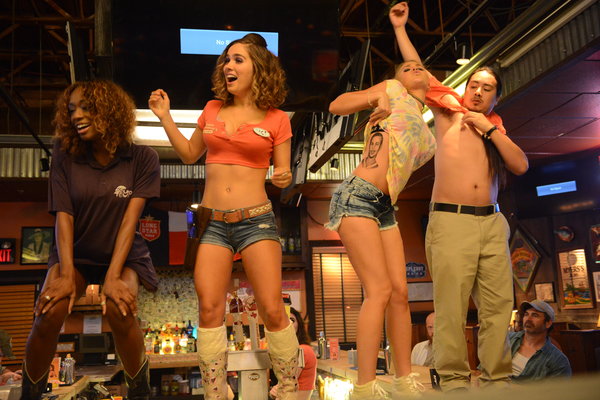 Lisa Conroy (Regina Hall) is the manager at a Texas sports bar that’s not unlike a Hooters (it’s called Double Whammies), and she’s having a rough day. Her marriage is collapsing, someone is trapped in one of the bar’s air vents, a waitress needs to be bailed out of jail, and — maybe worst of all — the cable’s out on fight night. This movie is warm and unforced, about the intersections of sex and sisterhood and working-class solidarity. Mainly, though, it’s very funny.
—

[Here is The New York Times’s list of the best movies on Netflix right now.]

It may require more than one viewing to fully process the eerie beauty of this one-of-a-kind sci-fi movie. The mysterious forest into which Natalie Portman and her team of fellow scientists are delving is a zone of dreamlike interspecies mutations, and the director Alex Garland (“Ex Machina”) enhances its otherworldly strangeness with a woozy score and unique sound design. Amid all the surreal visuals there are jolts of horror, and the virtually wordless conclusion has a haunting ambiguity.
—

Middle school can be the worst, as you may well remember — especially today, when kids are marinated in status-obsessed social media and pressured to perform on multiple platforms. Lovably awkward Kayla (Elsie Fisher) vlogs on YouTube, where she dispenses basic advice (“Be yourself”). But Kayla could herself use some advice as she attempts to navigate her last week of eighth grade in a pond of popular girls and hormonal boys who all seem so much cooler than she is. The writer-director Bo Burnham, in his feature debut, approaches the queasy teenage unease with a gentle fascination.
—

Season 1: brilliant. Season 2: bad — very bad, actually. Now Season 3 is here, hoping to recapture your attention, and the good news is, it has potential. The story, set in the Ozarks, takes place along multiple timelines between 1980 and 2015, and stars Mahershala Ali (at maximum brood here) as an Arkansas state detective haunted by a case involving two missing children. The story here isn’t as philosophically resonant as Season 1, but it’s more nuanced, and rich with noirish twists and turns and real-life overtones (at one point it recalls the case of the West Memphis Three). It’s all compellingly strange, and worthy of your renewed interest.
—

The calamitous Fyre Festival was initially billed as a luxury package music extravaganza in the Bahamas: Yachts! Villas! Private jets! But the 2017 party never started and was soon the target of bitter jokes, class-action lawsuits and criminal investigations. How did it go so wrong? This documentary tracks the event’s many problems, and it’s hard to decide which is the most outrageous revelation. Is it that the organizer/grifter Billy McFarland (now serving a federal prison sentence on wire fraud charges) actually instructed one of his crew to bribe a customs agent with sexual favors? Or that stranded attendees wound up locked inside a local airport without food or water? It’s a fascinating disaster, its only bright spot being that it didn’t happen to you.
—

Charlize Theron gives yet another knockout performance as the bedraggled Marlo, a woman who is ground down by her third pregnancy and, after the baby arrives, desperate for help. (Her loving husband is away a lot on business.) Suddenly an effervescent young woman named Tully (Mackenzie Davis) turns up to provide night-nanny assistance, offering much-needed advice, companionship and fresh-baked cupcakes. Marlo slowly gets her life back (“It’s like I can see color again,” she marvels), but just when you think you see a happy ending on the horizon, the story takes a major left turn, and the director Jason Reitman and the writer Diablo Cody bring it into a whole new emotional realm. The movie casts a magical spell that’s likely to stick with you after the end-credits roll.
—

Everybody’s favorite animated superhero family is back. You remember the Parrs: Bob, the dad (Mr. Incredible); Helen, the mom (Elastigirl), their teen daughter, Violet; her little brother Dash; and the baby, Jack-Jack (who now has some surprising super powers of his own). Also returning are the family’s frosty super-friend Frozone and their droll spandex guru Edna Mode. But Elastigirl is the center of attention now, facing off against a mysterious new supervillain and, dare we say, stretching herself a bit? You can never get too much Elastigirl!
—

01/02/2019 Entertainment Comments Off on The Best Movies and TV Shows New to Netflix, Amazon and More in January
Recent Posts