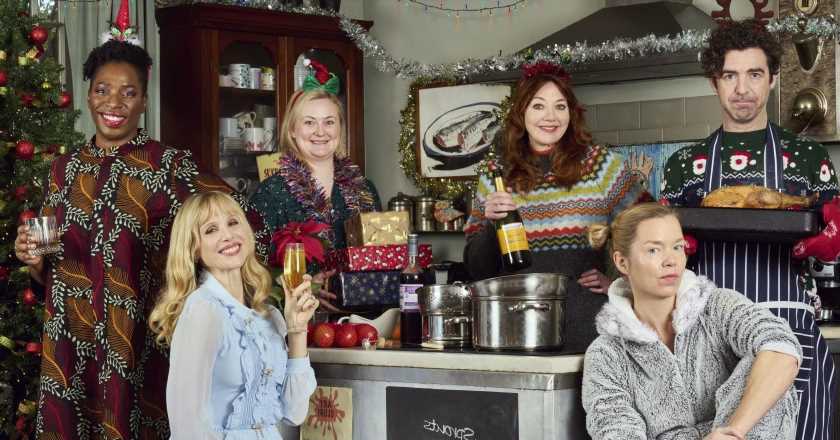 The BBC’s Christmas TV schedule is here, and there’s so much to choose from. With festive specials and new dramas, it’s going to be difficult to pick out of this magical line-up.

The joy of giving. Spending time with loved ones. Spreading cheer.

These things are all well and good, but we all really know how we’d really like to spend our dream Christmas: curled up on the sofa with an endless supply of hot chocolate and not speaking to anyone until the New Year.

Because we love seeing Christmas on our screens so much, the BBC Christmas schedule has become an important part of the festive season. Almost as important as preheating the oven for the turkey or remembering to put out a mince pie for Father Christmas. (Mind you, he’ll probably be taking the year off given how good the line-up is this year.)

If you’re in the midst of planning your Yuletide watchlist, we’ve got you covered with some of our most anticipated BBC shows below.

Love Actually fans, are you ready for the star-studded reunion?

The hit parent comedy is returning to our screens for a festive special that will reveal our most chaotic Christmas nightmares. Julia is taking on hosting duty with a large Christmas dinner gathering, which winds up including Kevin and Liz after their plans fall through. Frantic family fiascos and terrible husband-bought presents ensue as this hilarious farce will show us the true meaning of Christmas: panic.

Is it really Christmas without a Call The Midwife special? Not in our house. The episode will feature the return of Rhoda Mullucks, whose story appeared in season six that tackled the devastating Thalidomide scandal.

This spooky take on Christmas will see the anthology series turn its focus to a group of campers who visit a haunted church on Christmas Eve. Series creators Steve Pemberton and Reece Shearsmith will play the roles of Dr Jasper Parkway and Pierce in the ghostly tale.

Mackenzie Crook and Toby Jones return for the first time since 2017 to reprise their roles as metal detecting enthusiasts for a 75-minute special episode.

The worst teacher in the world is back! Jack Whitehall returns to our screens as Alfie Wickers in a new Bad Education special that follows previous students returning to the halls of Abbey Grove to follow in his footsteps.

Greg Davies starring as a crime scene technician? Count us in. This 2021 series (which has also been renewed for a second season) will be coming out with a special episode that sees Davies’ Wicky tackle a bloody scene in an ice cream parlour.

Things are going to be looking a little festive around the Button House this year. The entire ghostly cast of the comedy series will be hitting our screens in a Christmas special, as they plan a special Christmas surprise for Alison, but can they pull off their ambitious plan in time?

Though the Strictly final isn’t far off, we’ll also be treated to the dance competition’s annual Christmas special that will see a roster of new stars stepping into their dancing shoes. Celebrities are still to be announced, but we’ll be keeping ourselves tapping and twirling in the meantime with the current series.

Cliff Richard will be taking to the screen to perform some of his greatest hits, including a few Christmas tunes. The one-hour special will also follow Richard as he chats to Sara Cox about his 64-year career.

Comedians Bob Mortimer and Paul Whitehouse swap calm English riverbanks for the icy Norwegian waters in a new festive episode that follows on from their fifth series.

You can be sure that we’ll be tuning into our favourite friendly game show host Richard Osman’s quirky trivia show. Celebrity guests for the special episodes include Clare Balding, Brian Conley, Scarlett Moffatt and Phil Wang.

Inside No.9 will be getting it’s own festive special over the holiday

Netflix’s Falling For Christmas: “Every single thought I had while watching Lindsay Lohan’s festive romcom”

The Boy, The Mole, The Fox and The Horse

It’s the book you’ve seen on every Waterstones shelf over the past few years, and it’s now getting a television adaptation. Brimming with voice talent in the likes of Idris Elba, Tom Hollander, Gabriel Bryne and Jude Coward Nicoll, the animated short film will be airing on BBC and bring to life the poignant journey of the titular characters as they search for home.

Dick Whittington And His Cat

If you’re looking for a family-friendly viewing option, then CBeebies is returning with its annual pantomime. This year, the children’s channel will be showing Dick Whittington And His Cat, and is sure to boast a litany of some of the channel’s most popular presenters and actors.

Just because it’s Christmas doesn’t mean we don’t want a bit of drama. Mayflies is an adaptation of Andrew O’Hagan’s novel that takes place in a small Scottish town and follows the story of male friendship and the years that can impact it. Starring Martin Compston, Ashley Jensen and Tony Curran, this two-part series will be sure make you laugh as well as tear up.

The Bafta-award winning show will return to our screens for its third and final series over the festive period, and follows Sergeant Catherine Cawood as she grapples with a shocking new case after uncovering a body in a drained reservoir. Familial drama and a world of organised crime will make things even murkier for Catherine.  There’s just about enough time to catch up on the previous two seasons available on iPlayer now.

Phew. That’s a lot of TV to try and squeeze into one holiday season. But luckily, there’s something for everyone to watch this year, whether your festive tastes lay in quirky comedies, light-hearted tales or gritty dramas.

We’ll also be keeping you updated on any can’t-miss Christmas flicks and Netflix selections too. Our gift to you this Christmastime!