A flood of recordings — the best efforts of our favorite artists — lands each year in our mailboxes and streaming services. Somehow, we winnowed our favorites down to 25 albums (O.K., 26, if you look carefully), music from the 15th century to the 21st — each represented by a track we particularly cherished, and arranged here alphabetically by composer.

“Doctor Atomic,” an opera that may be better heard than seen, shines more than ever in this recording, conducted by its composer. Gerald Finley is still the reigning Oppenheimer, though even more commanding is Julia Bullock, who sings Kitty with restrained intensity and moving lyricism. JOSHUA BARONE

This spellbinding album may seem like companionable background music. But whenever I try to use it as the soundtrack for some dull administrative task, Ms. Aftab’s weaving of electric guitar lines, synth progressions and vocal melodies ends up commanding my undivided attention. SETH COLTER WALLS

Recorded mostly on Danish organs between 1959 and ’67, Ms. Alain’s earliest of three surveys of Bach has made its first appearance on compact disc. A revelation throughout, it is more personal than either of her more consciously authoritative sequels, letting instinct have its turn, as in the “Dorian” Fugue. DAVID ALLEN

Bach: Fugue in A minor

There’s a quiet fearlessness to this album, which includes off-the-beaten-path selections and offers an array of ways to consider Bach, including through transcriptions by the likes of Busoni and Rachmaninoff. In meat-and-potatoes fare, Mr. Olafsson is a master of finding and exploiting unexpected pockets of musicality. J.B.

Fugue in A minor 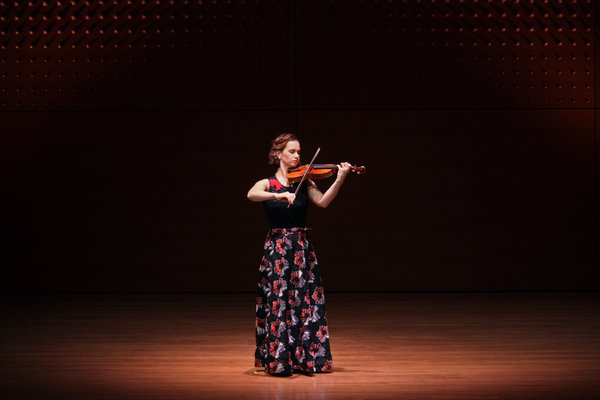 Recordings by Johnny Gandelsman (In a Circle) and Hilary Hahn (Decca)

It may not feel like the world needs yet another solo Bach album, but these two are essential additions to the pile. They’re impressive for different reasons: Mr. Gandelsman’s playing is buoyant and crisp, with the dancing spirit of folk music, while Ms. Hahn’s blend of historically informed performance and old-fashioned Romanticism has preternatural clarity amid symphonic grandeur. J.B.

The most interesting and innovative Beethoven recording since these forces set down the Fifth and Seventh, this intense “Eroica” nods in the direction of tradition but sounds completely new, rethought from the ground up. Just listen as the horns break through the funeral march, at once a pained outburst of grief and a call to greater things. D.A.

Bernstein mingles elements of Gershwin-esque jazz into the score for his ambitious Second Symphony. But on this recording, to their credit, Mr. Zimerman and Mr. Rattle do not overdo the jazziness. In this gripping track, the jazz piano riffs sound almost like pointillist strands of atonal music. ANTHONY TOMMASINI

In his settings of Rimbaud’s symbolist poems, Britten captured the blend of bizarre, beautiful, decadent and courtly elements. These mingled emotions enliven Mr. Phan’s singing on this recording, starting with the opening “Fanfare,” in which, in trembling voice, he declares that he alone holds the key to this savage parade (of life). A.T.

This superb pianist plays the four Chopin ballades magnificently. I especially admire the way he conveys the narrative sweep of the episodic First Ballade in G minor, while subtly bringing out the melancholic lyrical thread that runs through this dreamy and stormy piece. A.T.

Thanks to a rare (and stormy) Johanna Beyer suite that gives this recording its name — and an equally rare toccata-style work by Muhal Richard Abrams — this album’s one-two opening punch is intensely strong. Like Mr. Abrams, Ms. Davis is a celebrated pianist most familiar to jazz aficionados; Mr. Cowal’s performance of the finale from her “Eight Pieces for the Vernal Equinox” balances obsessive repetition with explosive melodic movement, successfully evoking her own playing style. S.C.W.

The calligraphic squiggles and vocal arabesques of Franco-Flemish Renaissance music come alive in the full-bodied and radiant sound of this female vocal ensemble. While it’s fun to dip in and sample, the album unfolds its full mesmerizing effect when you follow the singers on their squiggly line through music history, weaving together the ancient and the new in wondrous ways. CORINNA da FONSECA-WOLLHEIM

To my ear, Mr. Glass has been most consistently rewarding over the past decade as a symphonist. His Symphony No. 11 continues a few longstanding traditions. The first movement has his characteristic quality of grave propulsion, until some writing for the low brasses exhibits an unexpected lightness of step. The use of harp in the second movement is likewise arresting — at least until some gorgeous wind melodies take prominence. S.C.W.

This composer and saxophonist has been a regular in Anthony Braxton’s recent groups. On this set, Ms. Laubrock shows how thoroughly she has absorbed some of his lessons, by writing two works for orchestras stocked with talented improvisers. Even better than the solos is her writing for the larger forces — which, on “Vogelfrei,” include punchy percussion, frenzied strings and winds, an ethereal choir, and the pianist Kris Davis. (Yes, Ms. Davis again!) S.C.W.

Liszt: ‘Solemn March to the Holy Grail’ from ‘Parsifal’

After the death of a friend, Mr. Levit created an album-length meditation on how music continues beyond itself, through transcriptions, recreations, variations. The recording’s profound heart is Liszt’s transmutation of Wagner, in Mr. Levit’s hands a miracle of control and consolation. ZACHARY WOOLFE

‘Solemn March to the Holy Grail’ from ‘Parsifal’

Mahler’s darkest symphony takes on destructive force in this shock-and-awe recording by Mr. Currentzis, whose cult following is only likely to widen. In the tension between discipline and impulsive violence of this first movement, you can hear a kinship with Shostakovich and the music inspired by the 20th century’s cataclysms. C.F.W.

Listen to the next-to-last track on this recording of recent works by Mr. Meltzer and see if you don’t want to hear the entire album. It’s from his “Kreisleriana,” brilliantly crafted yet elusive music that seems at once playful, dangerous, waltzing and jumpy. A.T.

True to its title, Messiaen’s two-and-a-half-hour collection of stunningly difficult piano pieces is a catalog of skittish, tart and eerily beautiful bird calls. The achievement of Mr. Aimard’s matchless recording comes through in the second piece, “The Golden Oriole.” A deceptively tranquil harmonic backdrop keeps getting interrupted by evocations of frenzied, restless and captivating bird song. A.T.

Flamboyant virtuosity and a toffee-smooth voice encompassing inky low notes are the weapons of choice for this countertenor on an album of dazzling arias by Nicola Porpora, a Neapolitan opera composer and rival of Handel. Under Mr. Petrou, the period-instrument Armonia Atenea crackles with intensity and zest. C.F.W.

Ms. Fischer is a singer equally at home in the Baroque scene and the world of pop. On “Hush,” she finally gets to have her cake and eat it with buoyant arrangements of songs and arias — like this one from Purcell’s opera “The Fairy Queen” — that sparkle with wit and love. C.F.W.

Schuman is second nature to these lifelong partners in song, as this inexhaustibly perfect recital shows. “Die Einsiedler,” a setting of Eichendorff, stands in for the whole: fastidious sensitivity; utter refinement; getting to the heart of every word and, through every word, to the heart of the song. D.A.

Shostakovich: Symphony No. 11, Allegro (‘The Ninth of January’)

Mr. Nelsons’s Shostakovich cycle continues with the sprawling 11th, which moved me to near panic when I heard it live in Boston. Much of the symphony’s seismic power is preserved in this recording — especially the second movement’s explosive climax, with coldly steady snare drums that conjure relentless gunfire. J.B.

“Loom” begins with a thin thread of sound that is patiently roughed up and smoothed out in ways that seem both generous and brittle, with the light seeming to enter right where the texture appears most broken. Listeners equally equipped with patience and openness will be rewarded by this quiet and wise music, written and performed by women. C.F.W.

Ms. Liebner doesn’t blow out the dynamic contrasts in these pieces. Instead, she allows the unrelenting chromaticism to unspool patiently. The approach pays off in “Klavierstück VI,” which becomes a meditative dreamscape, running about 15 minutes over its usual 25-minute span. S.C.W.

This collection of Thorvaldsdottir chamber works is a tour of vivid sound worlds nimbly navigated by members of the International Contemporary Ensemble. At the album’s heart is “Aequilibria,” a piece with rich contrast and surprising balance between spaciousness — conveyed through airy fifths — and knotty smallness. J.B.

The singers of Stile Antico could appear on this list every year, but their account of Tomás Luis de Victoria’s motets for the Holy Week is unusually fine even for them. The simplicity with which they move through this tale of the Cross is unsparingly moving. D.A. 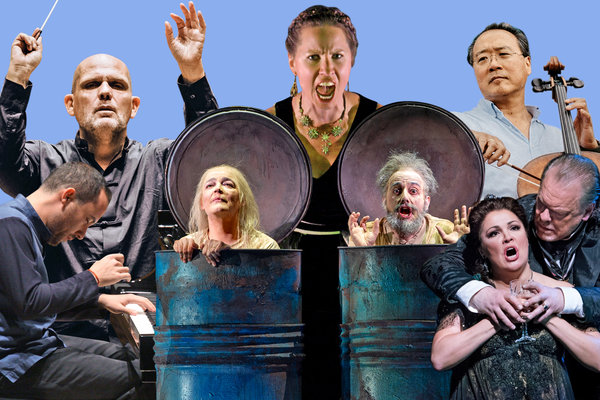 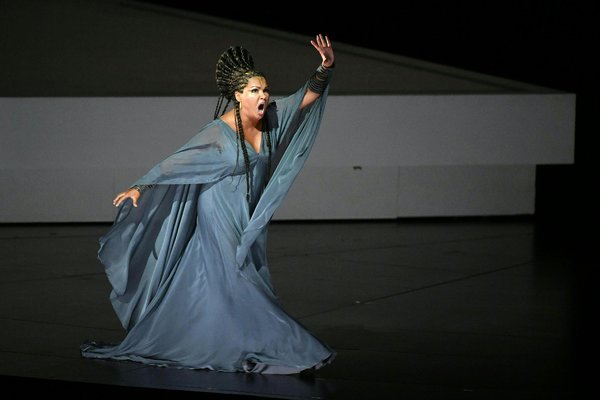 Anthony Tommasini is the chief classical music critic. He writes about orchestras, opera and diverse styles of contemporary music, and he reports regularly from major international festivals. A pianist, he holds a Doctorate of Musical Arts from Boston University. @TommasiniNYT

Joshua Barone is a senior staff editor on the Culture Desk, where he writes about classical music and other fields including dance, theater and visual art and architecture. @joshbarone • Facebook

Zachary Woolfe has been the classical music editor since 2015. He was previously the opera critic of the New York Observer. @zwoolfe