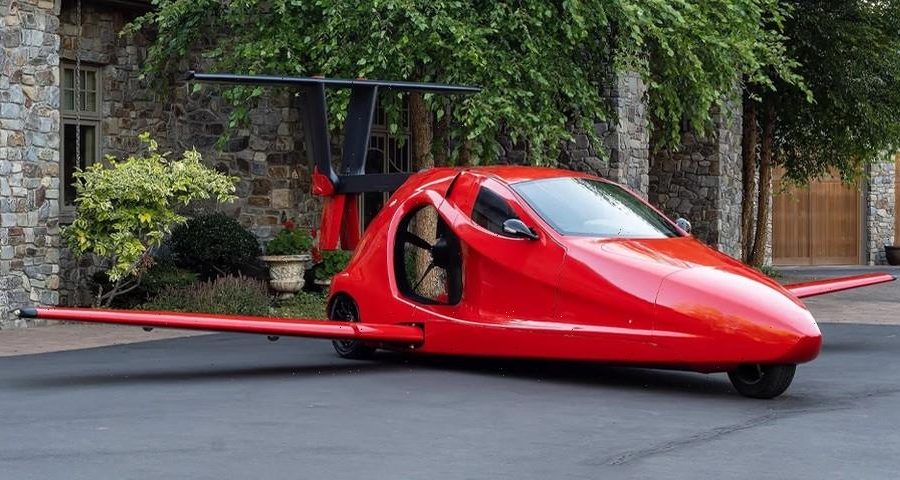 While we’ve seen various eVTOL concepts beginning to take form with relatively near-term target dates for real-world application, Samson Sky‘s Switchblade stands out as a unique concept thanks to its compact, classic design which appears in bright red. The Switchblade is able to transform from a road-legal car to a full-fledged miniature aircraft in just three minutes and as the name suggests, its wings and tail are collapsible, allowing the vehicle to fit in regular garages.

In terms of performance, the Switchblade is reportedly capable of reaching speeds of 200 mph with a cruise speed of 160 mph and a maximum driving speed of 125 mph. Auto-pilot and regenerative braking are included while a reverse thrust feature emulates a parachute during hairier landing conditions. Modern amenities include a sound system, heads-up display, climate control, and security systems.

Classified as an Experimental Category aircraft, owners are required to build 51 percent of the vehicle with the help of Sampson’s staff. An automobile or motorcycle license is required to drive the Switchblade on land and a private pilot license is needed to take it to the skies.

“We live in a generation of disruptive innovation – it’s in almost every part of our lives. The Samson Switchblade will be to General Aviation what the iPhone was to telecommunications,” reads a quote from Jerry & Connie Clark on the Samson Sky site.

The Switchblade is currently being tested on the runway and is reportedly a few weeks away from its first test flight. Early reservations are open here via the company’s website with prices starting at $170,000 USD.

In other news, Barbie and Maserati team up for an iridescent pink Grecale SUV.
Source: Read Full Article