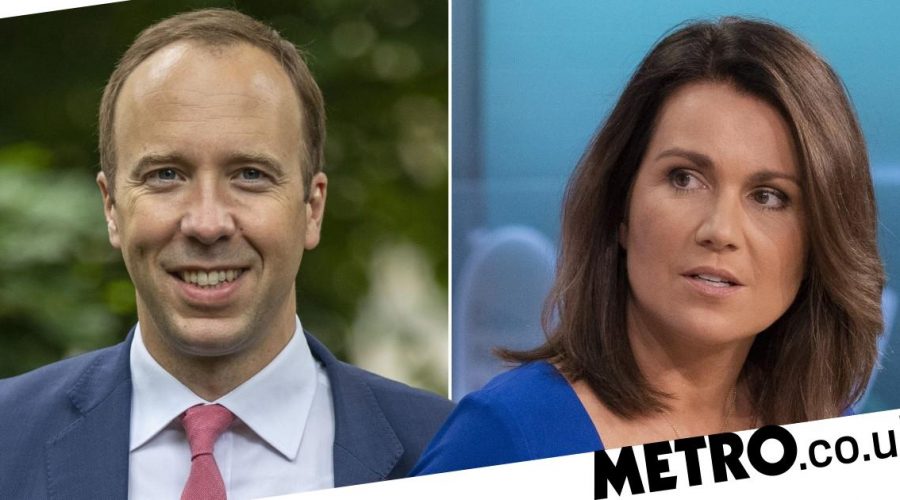 Susanna Reid is not impressed with the reports that Matt Hancock has been allowed his phone and his laptop while in quarantine for I’m A Celebrity…Get Me Out Of Here.

The former health minister is set to enter the jungle as a late arrival, reportedly alongside Strictly Come Dancing star Seann Walsh, and it’s safe to say his appearance hasn’t gone down well with the public.

Usually, celebrities have their devices taken away while they prepare to enter the camp, and are not permitted to contact the outside world (aside from in exceptional circumstances) until they leave.

However, it was recently reported that Mr Hancock has been allowed to use his phone to ‘carry on working’ in quarantine before entering the camp, as part of a deal he struck with ITV bosses.

It’s also said that he has also been allowed to speak to his personal advisor via Zoom.

A source told the Daily Mail: ‘Matt has been given a different arrangement during his isolation period to the other contestants. He has been allowed his phone and laptop so that he can carry on working and keep in touch with his constituents.’

Ed responded: ‘I know, he’s in quarantine, apparently on his phone!’ with a shocked Susanna replying: ‘That’s not allowed!’

‘I know, I think that’s going to go down quite badly in the camp,’ Ed reflected.

Susanna went on: ‘Well, the fact that he’s in there has gone down quite badly with the Prime Minister.’

Prime Minister Rishi Sunak has said he is ‘very disappointed’ in Mr Hancock’s decision to join the show while parliament is sitting.

Asked whether he’ll be watching the show, he told The Sun: ‘I genuinely won’t have the time is the honest answer.’

Mr Hancock’s arrival on the show has not yet been announced, but late arrivals usually enter the jungle on about the fourth episode, meaning he’s expected around Wednesday November 9.

Good Morning Britain airs weekdays at 6am on ITV. I’m A Celebrity…Get Me Out Of Here returns tonight at 9pm on ITV.