On a November afternoon, seven young students twirled, hopped and lifted their chests to the sky, as Waltz of the Snowflakes from “The Nutcracker” played through their computer speakers. Gathered for a weekly Zoom class, they had arrived at a part of the lesson that one of their teachers, Jenny Seham, called “freestyle snow dancing”: a moment to channel, through improvised movement, the wonder of Tchaikovsky’s music and the freedom of swirling snow.

“You guys really captured the feel for me,” Ms. Seham said when they had finished. “The important thing is that you’re listening to the music.” 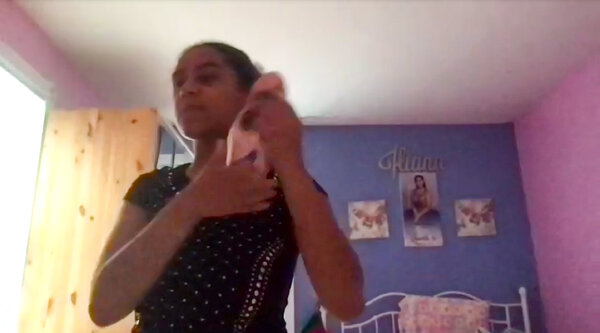 Listening is a fundamental skill for anyone learning to dance, but especially so for Ms. Seham’s students. As a longtime teaching artist with National Dance Institute, which brings dance education to New York City children, Ms. Seham has worked for over a decade with students who are blind and visually impaired, in partnership with the Filomen M. D’Agostino Greenberg (F.M.D.G.) Music School.

This year, for the first time, the music school — which serves students of all ages with vision loss — is offering a five-week “Nutcracker” appreciation course to bring to life the holiday classic in a multisensory way. Led by Ms. Seham and Dalia Sakas, the music school’s director of music studies, the course provides background in the story, history and cultural context of “The Nutcracker” (presented a bit differently for children, teens and adults).

Each student also receives a package of “Nutcracker” artifacts: a pointe shoe, a candy cane, a long stretch of tulle (from which tutus are made), a story synopsis and glossary in large print or Braille, sheet music with sections of Tchaikovsky’s score, and, of course, a nutcracker.

Perhaps most importantly, the class allows students to imagine the ballet through movement — to experience aspects of the work through their own bodies.

“They can’t sit in the audience and see the snow, but they can be the snow,” Ms. Seham said in a phone interview. “For me this class is about being dance.”

While the course is new territory for the music school — a “beta tester” for teaching ballet appreciation, Ms. Sakas said — it also builds on existing programs. Founded in 1913 (and formerly part of the larger organization Lighthouse Guild), the school has a history of illuminating visual art through music. Since 1997, it has held an annual concert at the Metropolitan Museum of Art, pairing pieces from the museum’s collection with “music that enhances the spirit of the artwork,” Ms. Sakas said. In recent years, students have written poetry that informs the selection of music and art.

The “Nutcracker” course extends this idea to dance, opening up a fantastical world that students may know only by name. “Even though they can’t see, they’re aware that there is a ‘Mona Lisa,’ they’re aware that these paintings exist,” Ms. Sakas said, “so why shouldn’t they be aware of dance as well?”

Because of the coronavirus pandemic, the music school moved its classes online, a shift that has been limiting in some ways but also “allowed us to dream a little bit” and try new things, Ms. Sakas said. Before the pandemic, children and teens from the school met for weekly in-person classes with Ms. Seham and volunteer alumni from National Dance Institute, who served as movement partners, guiding and collaborating with the students through physical touch. (The program is one of many facilitated by the dance institute, which was founded by the New York City Ballet star Jacques d’Amboise in 1976 to make dance more widely accessible to children.)

“When we were able to meet in person, tactile teaching was a really important element,” Ms. Seham said. “Obviously online we can’t do that, so we’re left with audio description” — describing the steps in clear, direct detail — “and finding that we can do it, it’s just a little bit slower.”

To acquaint students with the traditional music and story of “The Nutcracker,” Ms. Sakas and Ms. Seham have been sharing excerpts from a 1993 video recording of the standard-bearer: George Balanchine’s 1954 version for New York City Ballet, in which a young girl, Marie, journeys with the Nutcracker Prince to the Kingdom of the Sugarplum Fairy (the Land of Sweets).

But Ms. Seham said she also wants students to know about more contemporary takes on the classic — with varied characters, settings, music and styles of dance — and to envision their own. She has introduced them, for instance, to Donald Byrd’s 1996 “Harlem Nutcracker,” featuring jazz arrangements of Tchaikovsky by Duke Ellington and Billy Strayhorn. Students are asked to consider: “What would your ‘Nutcracker’ be? What would your magical journey be?” she said. “And how would that encompass what’s happening now and who you are?”

Those questions reflect Ms. Seham’s general approach to teaching at the music school, where she often connects dance with themes of social justice. Many of her students, she said, are children of color who confront multiple forms of discrimination in their daily lives. “When we talk about systemic racism and lack of access and lack of inclusion, they’re in the middle of it,” she said. “And so I want through the arts for them to be able to express themselves and show themselves.”

For the “Nutcracker” course, Ms. Seham has been teaching some basic ballet steps, while also leaving room for personal interpretation. “How you interpret it, how you feel the rise and fall of it, that’s up to you,” she told a group of students, ages 12 to 17, referring to the back-side-side footwork of a pas de bourrée, a structured preface to “freestyle snow.” “You can’t really mess up,” she added.

In the absence of physical touch as a teaching tool, the items in the “Nutcracker” package offer a different kind of tactile experience. Daniel Gillen, 26, a pianist and longtime student at the music school, said the texture of the tulle surprised him. During the adult class, he danced with the wafting fabric wrapped around his waist. “I didn’t think that it would be so porous,” he said in a phone interview. “Because all the air gets through, it almost becomes lighter than air.”

Opening the package, some students encountered a pointe shoe for the first time. (The shoes were collected by Daniel Ulbricht, a New York City Ballet principal, and are signed by members of the company who wore them.)

Matthew, who is visually impaired and has taken Ms. Seham’s classes for six years, said that as a musician who studies piano and voice, improvising is one of his strengths — and the same goes for dance. While dancing like snow, he said, he tried to think “about how it moves in the wind.”

“I feel like everyone, once in a while at least, should kind of just let themselves go, especially through art, dance included,” he said. “It’s fun to do it. It’s a beautiful thing.”