Steve Carter, an award-winning playwright who explored the African-American and Caribbean-American experiences with incisiveness, humor and a willingness to wrestle with difficult themes, including hatred, revenge and forgiveness, died on Tuesday in Tomball, Texas. He was 90.

A friend, Deb McGee, confirmed the death, in a nursing home. Mr. Carter had moved to the Houston area around 2010 to live closer to a nephew.

Mr. Carter was one of many playwrights to emerge from the renowned Negro Ensemble Company in New York City in the 1960s, ’70s and ’80s. Several of his major plays had their premieres there.

He was earlier associated with the Caribbean-born playwright, director and producer Maxwell Glanville and his American Community Theater in Harlem during the Black Arts movement, a flowering of politically motivated artistic achievement that began in the mid-1960s. At Mr. Glanville’s theater, Mr. Carter said, he had “a chance to do everything”: “I was a set designer, a costume designer, a prop master.”

His arrival as a playwright was heralded in 1965 with a production of his one-act play “Terraced Apartment,” a satire about a lower-income Black couple who feel out of place after moving into a more upscale neighborhood in Harlem. (He revised it years later as part of a series of sketches titled “Terraces,” offering four views of life in a well-to-do terraced apartment building.)

Two years later his surreal dark comedy “One Last Look,” centered on a funeral during which members of two Black families reflect on the death of their common patriarch, had its premiere at the Old Reliable Theater Tavern, an Off Off Broadway theater in the back room of a bar on Manhattan’s Lower East Side.

“Mr. Carter succinctly and graphically provides more insight into black people than can be found in a library of sociological treatises,” the critic John J. O’Connor wrote in his review in The Wall Street Journal. “More should be heard from him.” 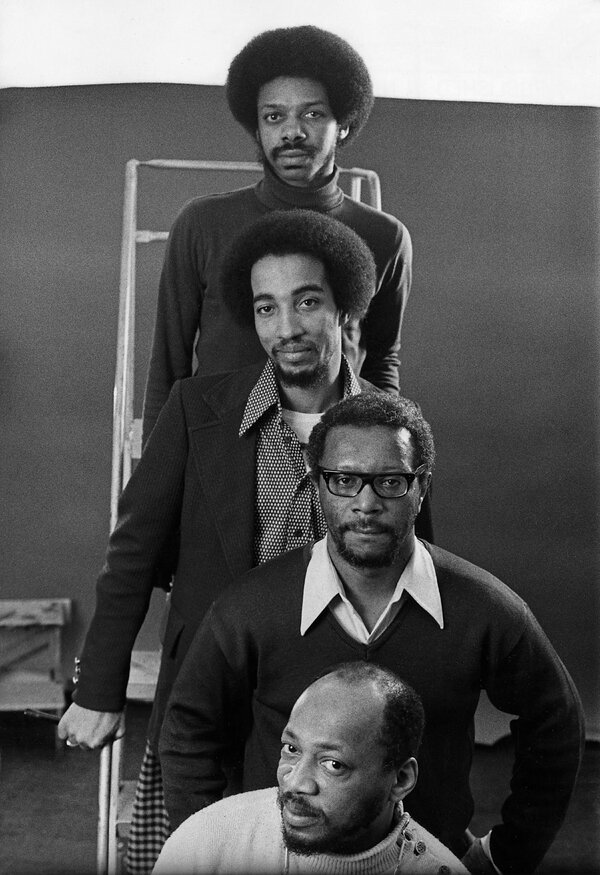 Mr. Carter made a significant stride in his career when he came under the tutelage of the playwright Lonne Elder III at the Negro Ensemble Company, founded in Manhattan in 1967 by the actor Robert Hooks, the playwright and director Douglas Turner Ward and the producer and director Gerald S. Krone. (Mr. Krone died in February.) Mr. Carter was put in charge of the company’s literary department and playwriting workshop.

“I learned as much from the playwrights in the workshop as I think they learned from me,” Mr. Carter said in an interview in 2016.

His writing gained wider attention when the Negro Ensemble Company produced “Terraces” in 1974. Two years later it produced “Eden,” the first of Mr. Carter’s trilogy of plays about Caribbean families living in New York City in the 20th century, which explored how a strict father disapproves of his Caribbean daughter’s relationship with a rural Black Southerner.

The second play in the trilogy, “Nevis Mountain Dew,” was produced by the company in 1978. It deals with euthanasia and its impact on the family of an incapacitated father who is confined to an iron lung.

The inspiration for the disabled character, Jared Philibert, was Morton Lane, a Paramount Studios lawyer who was a quadriplegic, and whom Mr. Carter had taken care of years earlier as an orderly at New York Hospital (now NewYork-Presbyterian Hospital). Mr. Morton had encouraged Mr. Carter to pursue a writing career, and Mr. Carter dedicated “Nevis Mountain Dew” to him.

In his Times review of that play, Mel Gussow wrote that Mr. Carter had written “dialogue that is hearty, flavorful and lightened with West Indian rhythms and humor.”

“This is a serious play with moments that make us laugh out loud,” Mr. Gussow added, “and, it must be emphasized, this is laughter that rises directly from character.”

Mr. Carter left the Negro Ensemble Company in 1981 to become the first playwright in residence at Victory Gardens Theater in Chicago. His first play to premiere there, in 1981, was “Dame Lorraine,” the final play of his Caribbean trilogy. It tells the story of a beleaguered family anxiously awaiting the return of the last surviving son, one of eight brothers, who has just been released from prison after 27 years.

Three years later, Victory Gardens mounted the premiere of Mr. Carter’s “House of Shadows,” about two teenage boys who decide to rob the home of two elderly women, only to be surprised by what they encounter.

That was followed by “Shoot Me While I’m Happy” (1986), a window on the dark side of the vaudeville circuit for Black performers, and “Pecong” (1990), perhaps his best-known work, a contemporary retelling of Euripides’ “Medea” set on a fictional Caribbean island.

Steve Carter was born Horace E. Carter Jr. on Nov. 7, 1929, in Manhattan. His father was born in New Orleans and grew up in Richmond, Va. His mother, Carmen Annetta Samuels, was from Trinidad. He had two brothers, both of whom died as infants, and a younger sister, June Bentham, who is his only immediate survivor.

In an interview for the literary journal The New England Review in 2016, Mr. Carter traced his love of theater to the first Broadway production he saw, in 1938. The play was “Amphitryon 38,” Jean Giraudoux’s retelling of a work by the ancient Roman playwright Plautus. The production starred Lynn Fontanne and Alfred Lunt.

“What fascinated me was the set design — the stuff coming down from the flies and out of the wings,” Mr. Carter said. “I determined then that that was what I wanted to do. I was still under 10, and I started to make models of sets.”

He wrote dialogue for the paper doll figures he created to act in these scale-model sets.

He said it was a production of Tennessee Williams’s “The Glass Menagerie” that inspired him, at 18, to be a playwright. He rushed home after the performance and wrote his first play, which he titled “The Ballad of Hugo Jones.”

After high school he served in the Air Force for four years and married while based in Europe. He said in interviews that while living there his wife and their two children, whom he did not identify, were killed in an automobile accident. It was, he said, one subject he would not talk about further.

Mr. Carter took on work as an orderly at New York Hospital, where he had been born, after returning from military service in 1953. Continuing in the job until 1967, he would mine the experience in several plays.

It was during his hospital employment that he volunteered to help out at the American Community Theater in Harlem. This proved to be the beginning of his theatrical career.

Mr. Carter served for a time as playwright in residence at George Mason University in Virginia; his play “Spiele ’36, or the Fourth Medal,” about an alliance between Black and Jewish athletes at the 1936 Olympics in Berlin, had its world premiere in 1991 on the university’s campus, at the Theater of the First Amendment.

His other plays include “The Inaugural Tea,” “Mirage,” “Paradise,” “Primary Color,” “Root Causes” and “Walking Graffiti.” Many have been mounted on college campuses and in repertory theaters in the United States and Europe.

Though Mr. Carter never achieved the wider fame of other playwrights associated with the Negro Ensemble Company, his imprint ran deep for many in the Black theater world.

“Without this playwright, I know my acting instrument would not be as sharp as it is,” the actress and director Barbara Montgomery said in an interview for this obituary in 2017. “His gift, his vision and his writing are main to my development as the creative artist I have become.”

09/17/2020 Entertainment Comments Off on Steve Carter, Playwright in a Black Theater World, Dies at 90
Recent Posts
We and our partners use cookies on this site to improve our service, perform analytics, personalize advertising, measure advertising performance, and remember website preferences.Ok