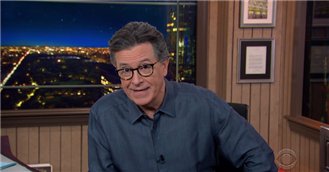 Welcome to Best of Late Night, a rundown of the previous night’s highlights that lets you sleep — and lets us get paid to watch comedy. We’re all stuck at home at the moment, so here are the 50 best movies on Netflix right now.

“Now due, apparently, to pandemic shutdowns, it has been a year since there has been a large-scale shooting in a public place,” Colbert said. “Now we’ve had two in the last week: Boulder and Atlanta. Evidently, the only solution for America’s gun violence is putting all of us under house arrest.”

“The responses from gun apologists, of course, have been predictable. The Colorado State Shooting Association released this statement: ‘There will be a time for the debate on gun laws. There will be a time for a conversation on how this could have been prevented. But today is not the time.’ Why not? That’s what they say every time this happens, and that’s what I say about what they say every time they say it every time it happens.” — STEPHEN COLBERT

Seth Meyers also addressed how common such violence has become.

“I heard an anchor this morning call the events in Boulder ‘unimaginable.’ That’s probably a word we can retire. When something happens three or four times a week, it is no longer unimaginable. Sadly, we’re at a place where common sense gun laws and political action are the things — they are the things that have become unimaginable.” — SETH MEYERS

“We could also stop using ‘shooter.’ It makes these people sound like hobbyists, which is exactly the [expletive] rationale that keeps those kinds of weapons flowing. ‘Killer’ or ‘murderer’ works just fine.” — SETH MEYERS

“And of course, we can do away with ‘thoughts and prayers.’ If the best you can muster in response to this kind of horror is to say words inside your own head and nothing more, best to look around, find someone or some organization that’s taking action, and help them instead.” — SETH MEYERS

Colbert specifically called out Senator John Kennedy of Louisiana, who during a congressional hearing attempted to steer the subject from gun control to young people who drink and drive.

“OK, I’ll take that deal. Let’s regulate guns the way we regulate alcohol and cars. You got to be 21, you got to pass a test to get a license, you got to have a registration and insurance for your gun. If you move to a new state, you got to do the whole damn thing all over again. And you can’t go out loaded.” — STEPHEN COLBERT

“Oh, we definitely have an idiot control problem. It’s people who don’t recognize that this country has long had a gun problem, ‘John Kennedy.’” — STEPHEN COLBERT

“Speaking of the pandemic, I saw that DoorDash will now deliver Covid test kits to your house. Yeah, the DoorDash guy will hook you up with fast food, Covid tests and, after a long enough pause, weed: ‘Here’s your delivery, here’s your test. [pause] All right, here, let me see what I got.’” — JIMMY FALLON

“Uber has started offering Covid tests, too. Yeah, if you get in the car and you can smell weed, you just tested negative, my friend. Congrats!” — TREVOR NOAH

“I got to be honest, it’s a little strange getting medical supplies from the same guy who brought you lunch from Fuddruckers.” — JIMMY FALLON

“Yes, thanks to DoorDash, you can now get a Covid test delivered right to your home along with, I’m assuming, 40 packets of ketchup.” — TREVOR NOAH

“And let me remind everybody right now that your delivery driver is not responsible for your test results, all right? Because you know there are people out there who are going to base their reviews on that: ‘What? You’re telling me that I have Covid? Dude, one star!’” — TREVOR NOAH

The “Daily Show” correspondent Desi Lydic delved into the world of women having orgasms onscreen in her segment “Hist-HER-y.”

Sharon Stone will stop by Wednesday’s “Late Show” to talk about her new memoir, “The Beauty of Living Twice.” 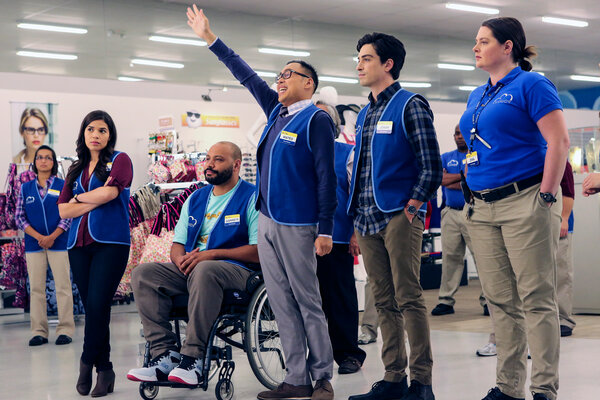 NBC’s big-box workplace sitcom “Superstore,” whose series finale is on Thursday, didn’t shy from the challenges faced by America’s low-wage workers, including the current pandemic.