Despite the C.I.A.’s conclusion that the crown prince authorized the killing, Trump essentially said the truth was unknowable: “It could very well be that the Crown Prince had knowledge of this tragic event — maybe he did and maybe he didn’t!”

“Did Donald Trump just knowingly provide cover for a murderous autocrat? Maybe he did, maybe he didn’t.” — STEPHEN COLBERT

Elsewhere in the document, Trump says that “the Kingdom agreed to spend and invest $450 billion in the United States.” Colbert objected to that reasoning.

“It’s like the old story: First they came for the journalists, and I said nothing. Next they came with a bag of money, and I said thank you.” — STEPHEN COLBERT

Colbert and Jimmy Kimmel were nearly speechless after reporting that Ivanka Trump had used a private account to send dozens of emails related to her work in her father’s administration.

Both hosts joked about the news without really arriving at any punchlines.

“The president’s daughter, Ivanka Trump, it turns out — Ivanka, who’s a member of the Trump administration — used her personal email account for official White House business. Sometimes the jokes write themselves. And this is one of those times.” — JIMMY KIMMEL

“We just learned that senior adviser to the president Ivanka Trump ‘used a personal email account to send hundreds of emails about government business last year.’ This is really damaging. If anything mattered anymore.” — STEPHEN COLBERT

The late-night hosts had some easy fun with the turkey-pardoning ceremony at the White House on Tuesday.

“Every year, the American people get a choice between sparing two birds. This year they’re named Peas and Carrots. The turkeys disguised themselves as vegetables so Trump would not be tempted to eat them.” — STEPHEN COLBERT

“Before the ceremony, the turkey was shampooed and dusted with baby powder to make him glisten. It’s very interesting, because every morning the White House staff does the same thing to Trump.” — JIMMY FALLON

“Trump left Washington to spend Thanksgiving at Mar-a-Lago. When they heard that, every White House staffer said, ‘Now that’s something I’m really thankful for.’” — JIMMY FALLON

“Jack Daniels announced it will start selling coffee beans that taste like whiskey. They’re calling it ‘Breath of a Salesman.’” — SETH MEYERS

“The trailer for the sequel to ‘The Lego Movie’ was released today. ‘The Lego Movie’ is a horror film about a parent who tries to get a glass of water in the middle of the night.” — SETH MEYERS

“Trump gave himself an A+. I gotta say, with grades like that I think he should be allowed to skip a couple years and graduate early.” — JAMES CORDEN, on a recent presidential self-assessment

Can Jimmy Fallon do 25 push-ups? Michael Strahan wanted to know.

Can James Corden easily be taken advantage of for money? Audience members wanted to know.

What ever happened to Tim Allen? Since 2011, the “Home Improvement” star has been doing a new show with a similar conceit: “Last Man Standing,” which recently moved from ABC to Fox. He’ll talk to Fallon on Wednesday. 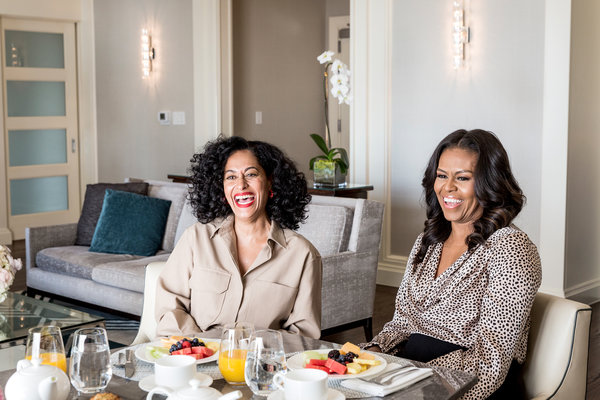 A former first lady (Michelle Obama) and the now-famous daughter of a pop star (Tracee Ellis Ross) walk into a bar. Well, technically, a hotel lobby. Here’s the conversation they had.

Plus, Ideas for What to Watch Tonight: