“Dear Santa, I have been a very good boy this year,” Colbert said to his Christmas Wish Cam about the MyPillow C.E.O. 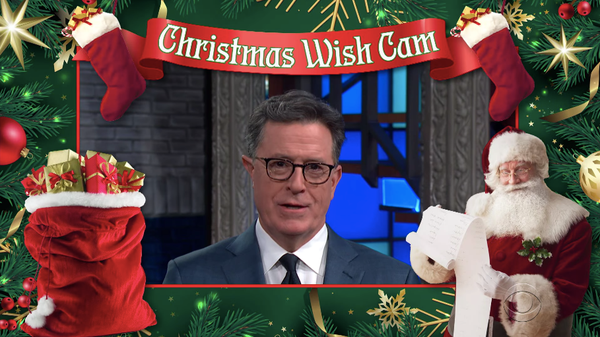 All I Want For Christmas

Earlier this week, Mike Lindell, the chief executive of MyPillow, announced his campaign to become chair of the Republican National Committee.

“Dear Santa, I have been a very good boy this year. I just want one thing for Christmas: Please put the screamy mustache man in charge of the Republican Party.” — STEPHEN COLBERT

“But despite Lindell’s MAGA loyalty, the former president has not yet publicly supported his bid. Wow. he hasn’t said anything supportive? But Lindell’s been like a son to — oh, yeah. All right. That makes sense.” — STEPHEN COLBERT

“But I’m a bit worried here, because an R.N.C. election pitting Lindell against incumbent Ronna McDaniel could tear the party apart between MyPillow MAGA crazies and traditional conservatives, which is why I propose a compromise candidate, someone right down the middle: Pillow. He’s got everything the Republicans want — he’s white, and he’s square.” — STEPHEN COLBERT

“Today, President Biden hosted French President Emmanuel Macron for the first White House state dinner in more than three years. Yep, the French like to eat late, so Biden was like, ‘Got it, 4:30 it is.’” — JIMMY FALLON

“The Bidens hosted the French president and his wife for the first official state dinner. Biden does state dinners a little differently than former presidents — they happen at 4 o’clock, and then everybody goes to bed.” — JIMMY KIMMEL

“A state dinner at the White House. I wonder if they serve French food or, as Macron calls it, food.” — JAMES CORDEN

“This is a landmark event between the United States and France. They’ve finally started negotiations to get Emily out of Paris.” — JAMES CORDEN

The “Jimmy Kimmel Live” special correspondent Jake Byrd riled up fans at a recent Herschel Walker rally in Georgia before speaking with the Senate candidate himself.

12/02/2022 Entertainment Comments Off on Stephen Colbert Asks Santa to Put Mike Lindell in Charge of the G.O.P.
Recent Posts