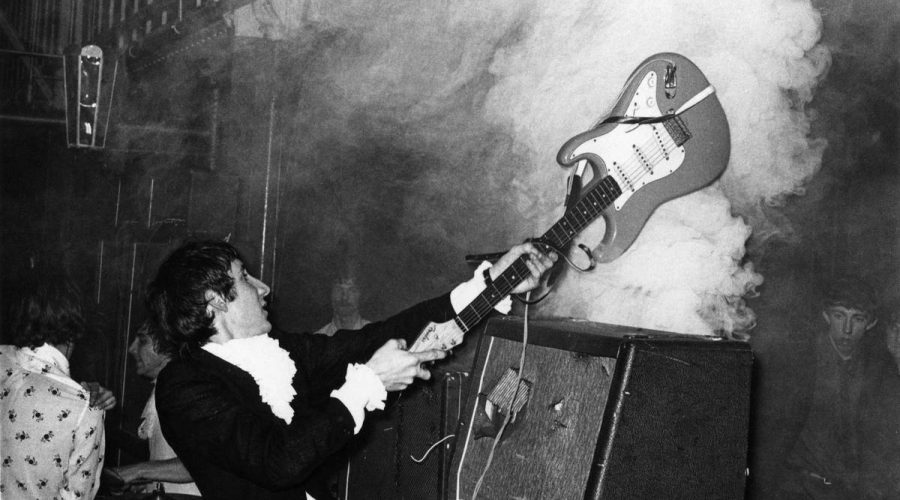 Rock ‘n’ roll guitarists have been smashing guitars on stage since at least 1964 when Pete Townshend, of the band The High Numbers, got a bit upset after he inadvertently punched a hole in the low ceiling with his guitar headstock and wanted everyone to know about it. The audience was impressed. The second time he wrecked an instrument on stage was actually for publicity —someone from the Daily Mail had told the bandanother guitar smash would help land them on the paper’s front page, so Townshend checked with his manager to make sure they could spare the expense of ruining yet another guitar. Though he got the go-ahead and carried out the mission with flair, the Daily Mail failed to hold up their end of the unofficial bargain. Nonetheless he repeated the stunt quite a few more times as the band became known as The Who. Other musicians followed, impressed by the sheer ballsiness of the gesture. “I grew up lucky enough to have seen The Who in ’68. I saw Jimi Hendrix twice,” Kiss frontman (and avid guitar-smasher) Paul Stanley told AllMusic in 2016. “The idea of almost ritualistically smashing a guitar is something so cool and touches a nerve in so many people that it seemed like a great way to put a period or to dot the I or cross the T at the end of a show — that this is finite, that this is over, it’s the climax.”

Troll posts this to closed anti-vaxxer page called Vaccines Exposed to see if they take the bait. They do. Laurence, a member, lets Deb into the private group and asks what happened. She responds: “So when I first got there, there was absolutely NO place to park,” the post read. “Then, I left my keys in the locked car. So I had to call roadside rescue and wait for them to get there. And of course that took forever. Then, as I was waiting, some guy walked by me and gave me a rude look like I was loitering or something. Then when roadside rescue got there I found out the doors weren’t even locked. Ugh. So then I was like an hour late for the study and so I was last in line to get the vaccine. I got vaccinated though so now I have a decreased chance of contracting Covid. So that’s cool. But it was one of the worst experiences I’ve ever had.”

The comfort of sameness

New baby name data from the US is as predictable as a Crusaders win on home turf, with the top three namesof 2021 for both girls – Olivia, Emma, and Ava – and boys – Liam, Noah, and Oliver – remaining the same for the second year in a row. One name has seen a relatively sharp decline: Rona, with only 17 baby girls given that moniker in 2020, the year the coronavirus started wreaking its havoc. In 2017, 30 infants were graced with the name.

How some friendships end

1. “At university my flatmates had a massive food fight and completely destroyed the house we lived in. Lumps of Marmite were stuck to the ceiling. It was hideous. Totally trashed. I came home from work to utter carnage. They went away for the weekend and left me to deal with the landlord. I thought screw that and moved out.”
2. “I got my hair done and went from brown to blonde a few years ago and a uni friend at the time who had black hair said she couldn’t believe I’d be so cruel and flaunt being blonde in her face when she couldn’t go blonde. Literally just turned up for a lecture, she kicked off, stormed out, blocked me on all social media then spent the rest of the year glaring at me from the back of the room every lecture.”
3. “Unfriended and blocked on Facebook, also blocked my phone number and wouldn’t respond to emails. Completely out of the blue – we had been really close friends for years. A mutual friend told me that she didn’t like that I was funnier than her on FB and all of her other friends wanted to know who I was as I seemed fun and interesting, and they were her friends and not mine.”

05/09/2021 Entertainment Comments Off on Sideswipe: May 10: The birth of the rock ‘n’ roll guitar smash
Recent Posts