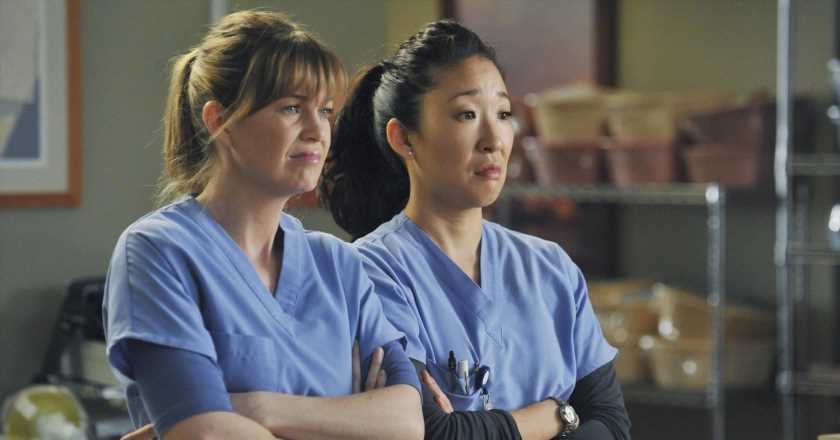 The longest-running medical drama in television history, Grey’s Anatomy, was branded a failure before it even began by male TV executives, according to a new interview with creator Shonda Rhimes.

In yet another astounding example of sexism in the entertainment industry, the creator of Grey’s Anatomy and all-round legend that is Shonda Rhimes has revealed that the multi-award-winning show, currently airing its 19th (yep, count them) season in the US, almost didn’t make the cut.

Rhimes revealed the shocking admission on an episode of The 9-5ish With theSkimm podcast (via Insider) that a room full of old male television executives gave her a hard time for starting her show in the way she did. How exactly? Read on and prepare to be surprised.

Seventeen years after Meredith (Ellen Pompeo), Derek (Patrick Dempsey) and pals first hit our screens, Golden Globe winner and four-time Emmy-nominated Rhimes has revealed that TV executives were less than impressed with the opening scenes of Grey’s Anatomy. Cast your mind back to that very first episode. You know the one – where we first get a glimpse of Meredith and Derek’s affair and see the young, attractive trainee surgeon enjoying consensual sex with a very attractive guy.

“I remember getting called into a room full of old men to tell me that the show was a problem,” recalls Rhimes on The 9-5ish with theSkimm podcast.

“They said that nobody was gonna watch a show about a woman who would sleep with a man the night before her first day of work,” she continued, “and they were dead serious.”

Because a woman couldn’t possibly enjoy sex and be intelligent, talented and highly employable, right?

Wrong. Meredith Grey, love her or loathe her, has almost single-handedly changed the narrative around women and their sexuality on the small screen. Rhimes reminds us that in network shows before Grey’s, there had “never been a show in which a lead character owned her sexuality” and you only need to think back to the cringe-inducing Ally McBeal-style of protagonist to see her point.

When I first watched Grey’s Anatomy, I remember being struck by Meredith’s self-assured assertion that she didn’t want a relationship with Derek. What kind of woman was she? And let’s not forget that when they first slept together, she didn’t even know his name. Back in 2005, this was pretty radical thinking.

For context, when this episode first aired, internet dating wasn’t really a thing, Tinder wasn’t even a pipe dream and women didn’t really talk about having casual sex as openly as we might do today.

But if, like me, you can’t imagine a world without Meredith, Derek and pals, you have Rhimes’s business partner and friend Betsy Beers to thank.

Fortunately, Beers was also at the meeting and staunchly defended her friend when a male executive questioned who would watch a show about a woman who sleeps with a man the night before starting a new job, telling them in no uncertain terms: “That’s me – I did that. That’s absolutely me!”

Rhimes recalls: “They could not get out of that room fast enough. They didn’t know what to do – they were like, ‘These are the kinds of women we don’t like.’”

It’s hard to fathom whether the executives were genuinely appalled by the notion of smart, capable, sexually confident women or were simply annoyed they didn’t think of it themselves.

Thankfully, the medical juggernaut was given the go-ahead and to date has been nominated for 39 Emmy awards, multiple Golden Globes and even a Grammy.

But awards aside, Grey’s Anatomy is culturally significant too. It leads the way in highlighting issues as important and diverse as the gender pay gap, police brutality amid the Black Lives Matter movement and LGBTQ+ issues have consistently been at the forefront of plotlines, using its substantial platform for the greater good while providing undoubtedly excellent entertainment.

And Rhimes herself has more than proved her worth as a screenwriting and producing heavyweight, responsible for the Grey’s Anatomy spin-off Private Practice, as well as the political thriller Scandal and legal murder-mystery How To Get Away With Murder.

Rhimes is a woman who truly puts her money where her mouth is when it comes to forging a more gender-equal future for us all, proving her commitment to women’s issues in 2018 when, alongside Hollywood heavyweights such as Reese Witherspoon and Emma Stone, she helped to launch the “Time’s Up” initiative to tackle sexual harassment in the wake of the Harvey Weinstein scandal.

Whilst Rhimes is by no means the only woman who has been told she’ll fail by powerful men – and she certainly won’t be the last – 19 seasons, a Golden Globe and four Emmy award nominations later, Rhimes has more than had the last laugh. Long live Grey’s Anatomy!