Elba Roman knew she wanted the apartment from the moment she laid eyes on it. She had seen other places, but this one stood out.

“I saw this building, and I took a picture across the street, and I said, ‘I want the second floor because it has the deck,’” Ms. Roman said, sitting on her couch as light filled the living room. Portraits of her family covered the walls. Small furniture and toys for her grandchildren lined the sides of the rooms.

Ms. Roman, 53, worked hard to make this apartment in the Bedford-Stuyvesant neighborhood of Brooklyn her own, buying it in 2012 with assistance from Habitat for Humanity. The organization’s home purchase program requires recipients to put in “sweat equity,” working on their new home and other Habitat projects. She worked 200 hours; her two adult sons each contributed 100 hours, too.

Ms. Roman smiled, remembering how she had worked alongside her sons toward a new home. “I did what I had to do,” she said.

But in the years since her purchase, Ms. Roman has experienced job loss and medical problems, and is now in foreclosure, facing more than $40,000 in back mortgage payments.

“If I lose the apartment and I don’t have a choice, I’ll move in with my sister,” she said. “I started packing just in case, that’s why the apartment is a mess. I don’t want to get caught out there and have to leave. I started giving stuff away. The only thing I’m concerned about are the dogs.”

Snoozing in a back bedroom, Ms. Roman’s dogs, a Jack Russell and Chihuahua mix named Ruby and a Boston terrier named Nala, have health issues of their own.

“It’s so stressful,” she said recently, holding back tears. “What are you going to do when you have pets? I’m not going to give them away. They’re like my kids.”

Life did not always feel so volatile for Ms. Roman. She grew up in Brooklyn and worked as a bookkeeper at a real estate firm for 20 years. She sometimes held down multiple jobs, including night shifts at postal distribution center in Bethpage, N.Y., to make ends meet. 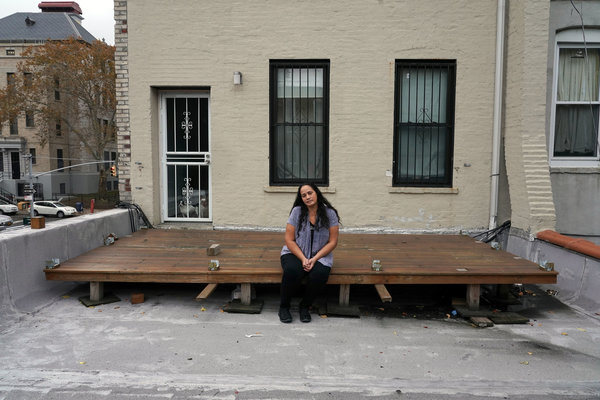 But in 2009, her health began to fail. Over the course of a year, she had a ruptured colon, gallbladder surgery, a full abdominal reconstruction and hernia surgery. When she felt up to it, Ms. Roman went back to work and began working toward buying an affordable home through Habitat to find a better place to live for her and her sons. She achieved her goal six years ago.

Ms. Roman continued to work from home with the real estate firm until four years ago, when the company folded. At first she was able to continue paying the mortgage and maintenance fees on the condo. But when money got tighter, she began paying one and not the other, ping-ponging on payments each month until eventually she could not afford either.

Through Catholic Charities Brooklyn and Queens, one of eight organizations supported by The New York Times Neediest Cases Fund, Ms. Roman received $1,178 in July, which helped her pay off her outstanding utility bills. But they continue to pile up. She receives $421 a month in public assistance and $192 a month in food stamps. She’s been denied Social Security benefits twice (an appeal is pending).

Ms. Roman said she “is in pain all the time.” Last year, doctors performed a spinal fusion procedure on her back, and she recently received a knee replacement. She was not able to find another job that did not require her to commute, she said, an activity that exacerbates her existing pain.

Ms. Roman’s goals are to get healthy enough to be able to play more in the park with her grandchildren and walk her dogs, and find work that allows her to pay off her bills, maybe by taking online college courses.

Donations to the Neediest Cases may be made online, or with a check or over the phone.

11/18/2018 Entertainment Comments Off on She Worked to Own a Home. Now She’s Struggling to Keep It.
Recent Posts