A new batch of graphic novels and comic books lands in this season of celebrations, with nods to holidays past and those to come. Crack open these comics — including some classics that are always nice to come back to — and enjoy.

How the X-Men and X-Women celebrate 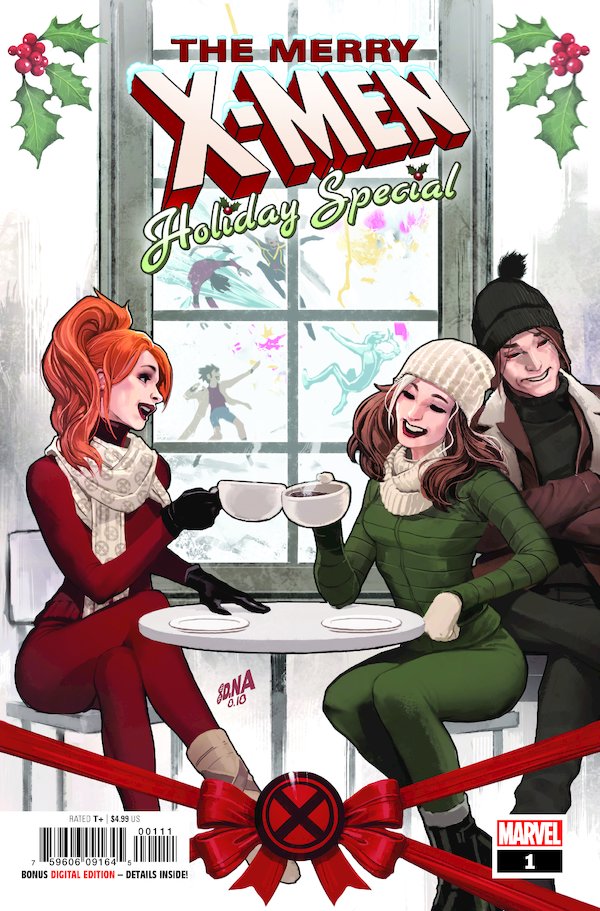 The Merry X-Men Holiday Special (Marvel Entertainment), an anthology from Marvel Comics with 22 stories (most of them a single page each), presents the first 25 days of December in the lives of the X-Men and X-Women: Jubilee plans a Hawaiian vacation with her son, Shogo, and is thwarted by a villain; a little girl plays with Deadpool and Jean Grey action figures; and Beast tries to find the perfect “Star Wars” gift for his love interest. Two somber pages, in particular, resonate: Those of Dec. 2 and Dec. 9.

Kitty Pryde lights a menorah on Dec. 2 and remembers her father and 12 million others who were massacred by anti-mutant forces in Genosha, an island nation that was supposed to be a haven for mutants. “Their lives, their dreams, their futures, were stolen from them by hate,” she thinks.

On Dec. 9, two young boys in Warsaw remind a dejected Magneto what Hanukkah is about — a small band of Jewish people who faced an impossible enemy and won.

Oh Santa, how you’ve let yourself go over the years! Klaus and the Crying Snowman (Boom! Studios), is a retelling of the early years of Santa Claus, when he was hunky and burly and looked like a lumberjack. In this story, Klaus joins forces with a cursed snowman against Norse gods, with the universe at stake.

There is time travel and bold action, but at the core is a tragic tale of how the snowman came to be. The drawings of Dan Mora do a fantastic job of imbuing this sad creature — with coal eyes and a carrot nose — with recognizably human expressions.

The DC Comics Nuclear Winter Special (DC Entertainment) offers 10 new stories. Two are especially emotional. One, “Memory Hearth,” depicts an encounter between a future version of Superman (from the 853rd century) and the Martian Manhunter. “You thought you had no one,” the Man of Steel of the future tells the other alien hero, but “you’ve never truly been alone.”

In the other, “Last Daughters,” Supergirl and an orphan named Lucy are in a not-too-distant future when Earth’s environment is close to inhospitable. Supergirl resolves to get Lucy off the planet to a new world, where she will have a chance at a better life. It nicely echoes — with a twist — the journeys of Superman and Supergirl and the sacrifice their parents made for them in the wake of Krypton’s destruction.

Planting the seeds of optimism

All We Ever Wanted: Stories of a Better World (A Wave Blue World), another anthology, edited by Matt Miner, Eric Palicki and Tyler Chin-Tanner, is for anyone who likes a dose of good news to balance out the frequent bad. “We felt so strongly the best gift right now, in these times, is a bit of hope,” Miner said of the project, which has 24 short stories loaded with hope. (More “Star Trek” and less “Mad Max,” the editors promised.)

One highlight is “The Weight of Time,” about a well-meaning scientist who builds a time-travel device and hopes to use it to correct some of history’s wrongs. Another is “Day at the Park,” about a robot trying to fly a kite that is nearly dialogue free but for a couple of words and beeps.

“The Weight of Time” is by Jarrett Melendez, Danica Brine and Taylor Esposito, and “Day at the Park” is by Eliot Rahal, Jason Copland, Josh Jensen and Zakk Saam.

A different type of Exodus

In January, Passover Haggadah Graphic Novel (Koren Publishers Jerusalem) makes its debut. The tone of the book, which Jews have been reading for centuries at Seders (the festival meal), is respectful yet playful. “We’re connecting a new generation to our loving history, by illustrating the fully unabridged, authentic text in the sequential storytelling style of comics — a Jewish innovation, you know,” the narrator says.

The narrator’s pose — legs astride, puffed chest and hands along his waist — recalls Superman, whose creators Jerry Siegel and Joe Shuster were Jewish. But even before the debut of the Man of Steel in 1938, innovation came from Max Gaines, who was also Jewish, in 1933, when he had the idea to reprint newspaper comic strips, which proved popular for sales and inspired the creation of original comic books.

As with all Haggadot, this one gives instructions for the order of the ritual retelling of the Exodus story, from slavery to freedom.

By Jordan B. Gorfinkel and Erez Zadok.

A hero for a homeless man

Starman is a tale of a legacy — a son carrying on the heroic persona established by his father, finding his own path, starting his own family — told over more than 80 issues by James Robinson. But Starman 25 (DC Entertainment, 1996) is a stand-alone story with Jack Knight, the title hero, encountering a down-on-his-luck homeless man (Pete) dressed as Santa.

A locket with a picture of Pete’s wife and son, who died in a car accident, has been stolen, and Jack finds him crying on a park bench. Jack spends the evening helping Pete, despite having family and friends waiting at home for a holiday meal.

Jack, who starts out in the series as a bit self-centered, radiates compassion in this issue.

Hitting rock bottom — in a bar

Matt Murdock is feeling a bit down on his luck in Daredevil 266 (Marvel Entertainment, 1989) when he wanders into a Manhattan bar on Christmas, intending to soak his sorrows in beer. Clad in his costume, the vigilante hero meets a mixed bag of people. Ann Nocenti based the story on her own experience of Christmas Day in 1987, at a bar where she “met other unfortunate souls like myself that had nowhere to go.”

“I was planning a story arc that was going to blow up Matt Murdock’s life,” she recalled in an article for the 13th Dimension, a comics blog. “I thought, ‘Damn, he could end up here at the end of that arc.’”