Heather North, the US actress who was the voice of Daphne in Scooby-Doo for many years, has died at the age of 71.

According to reports, she died at her Los Angeles home on 30 November after a long illness.

North was the second actress to voice the “danger-prone” Daphne Blake in the Scooby-Doo, Where Are You! TV series, making her debut in 1970.

The California native continued voicing the role in various iterations of the property until 2003. 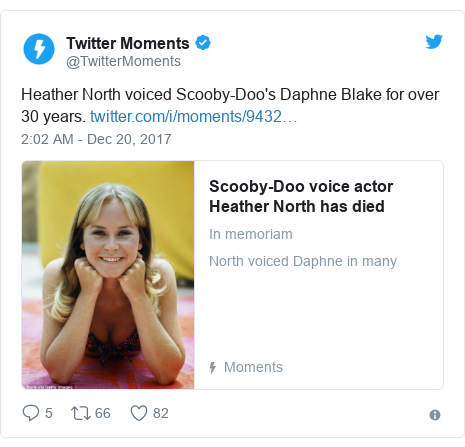 North’s other roles included Kurt Russell’s girlfriend in Disney’s The Barefoot Executive and Sandy Horton in Days of Our Lives.

It was that job that led to her meeting producer Wes Kenney, to whom she was married from 1971 up to his death in 2015.

Stefanianna Christopherson was the first actress to lend her voice to Daphne, the role Sarah Michelle Gellar played in the 2002 live-action film.

North’s death was initially confirmed by the Hollywood Reporter.

08/30/2020 Entertainment Comments Off on Scooby-Doo voice actress dies aged 71
Recent Posts
We and our partners use cookies on this site to improve our service, perform analytics, personalize advertising, measure advertising performance, and remember website preferences.Ok