Two major artworks from the collection of the artist Robert Indiana will be offered at auction in New York this month to help pay for his estate’s mounting legal fees and repairs to his former mansion in Maine.

The executor of the estate, James W. Brannan, said that, while the probate proceedings over the artist’s will are far from over, he needs money now in light of the house’s leaking roof and the expense of contesting a lawsuit filed in United States District Court in Manhattan against the estate.

“Litigation is expensive, especially in New York,” said Mr. Brannan, a lawyer in Rockland, Me. Speaking of New York lawyers, he added jokingly: “If any papers so much as cast a shadow on a desk, they bill for it.”

The works by Ed Ruscha and Ellsworth Kelly could together bring in more than $4 million, according to estimates by Christie’s, which is offering them at its morning postwar and contemporary art sale on Nov. 16.

The federal lawsuit filed just a day before Mr. Indiana died in May, by his business agent accuses Mr. Indiana’s caretaker and a New York publisher of isolating the artist in his last years so they could sell inauthentic artwork attributed to him. The caretaker and publisher deny the allegations. The estate is a defendant in the case.

Mr. Brannan is also responsible for maintaining Mr. Indiana’s home, the Star of Hope, a landmark building on the island of Vinalhaven, which the artist’s will directed be converted into a museum to be run by a foundation. 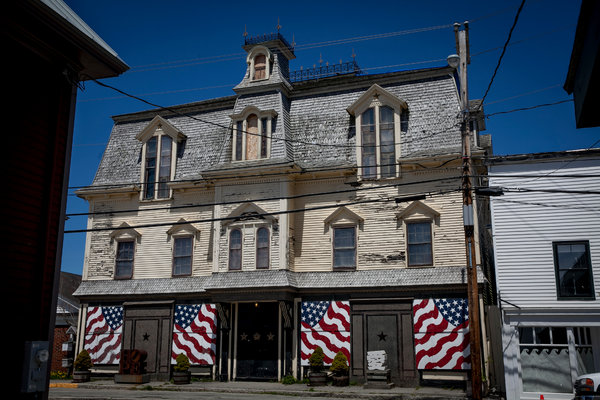 Last week, the nonprofit Maine Preservation listed the building as one of Maine’s “Most Endangered Historic Places.”

“We really feel strongly that there needs to be some work done on the property just to secure it, to make sure there is no more water infiltration, to protect what is left of the interior, and stop the ongoing deterioration,” Sarah Hansen, the real estate manager of the preservation group said.

Some former friends of the artist, such as Kathleen Rogers, his former publicist, and John Wilmerding, emeritus professor of American art at Princeton University, said they oppose the sale, suggesting that the Indiana legacy was being diminished by off-loading works that were crucial to the artist’s identity.

Mr. Indiana’s relationship with Ellsworth Kelly was especially important, they said, as the two were once lovers. They were among a number of artists who lived on Coenties Slip in Lower Manhattan in the 1950s. The Kelly work, “Orange Blue,” was a gift to Indiana and carries the inscription on the reverse “EK 1957 FOR ROBERT AN ORANGE PEEL FROM PIER 7,” according to Christie’s catalog notes.

“It’s tragic because those are major works,” Professor Wilmerding said. “Somehow the estate ought to be kept together. Not just his own works, but the works that he collected or was given.”

He said the Ruscha piece, titled “Ruby” is also important to understanding Mr. Indiana because both artists worked in a verbal tradition. The auction house’s catalog information speculates that Mr. Indiana may have been drawn to the work because a woman called Ruby was accused of the murder of his stepgrandmother — an emotional ordeal that may have been a catalyst for his parents’ divorce.

Professor Wilmerding said that, while it may be necessary to sell some works, no sale should occur until the members of the board of the foundation, called Star of Hope, have assessed the artistic importance of any works to be sold.

Mr. Brannan said he had faced high costs in moving art out of the house and into safe storage. He had sought curatorial advice about which works to sell, he said, though he would not say who he had consulted. He said he wanted to avoid selling any of Mr. Indiana’s own art, which will be the primary focus of the museum to come.

Michael Komanecky, chief curator at the Farnsworth Art Museum in Rockland, said he also thinks it is more important to keep Mr. Indiana’s own art intact. “By far the most important works of art in the house are by Robert Indiana, both in quality and quantity,” he said.

In Maine, an executor has the power to sell assets as he administers the estate and there is no required judicial review.

As part of the probate proceedings, Mr. Brannan is trying to clear up questions that have swirled about Mr. Indiana’s finances such as establishing whether any money is owed to the estate by various parties, and getting a comprehensive inventory of the whereabouts of all the artworks Mr. Indiana left behind. Mr. Brannan said his inventory of the pieces contained in Mr. Indiana’s estate had so far accounted for nearly 800 works but was not yet finished.