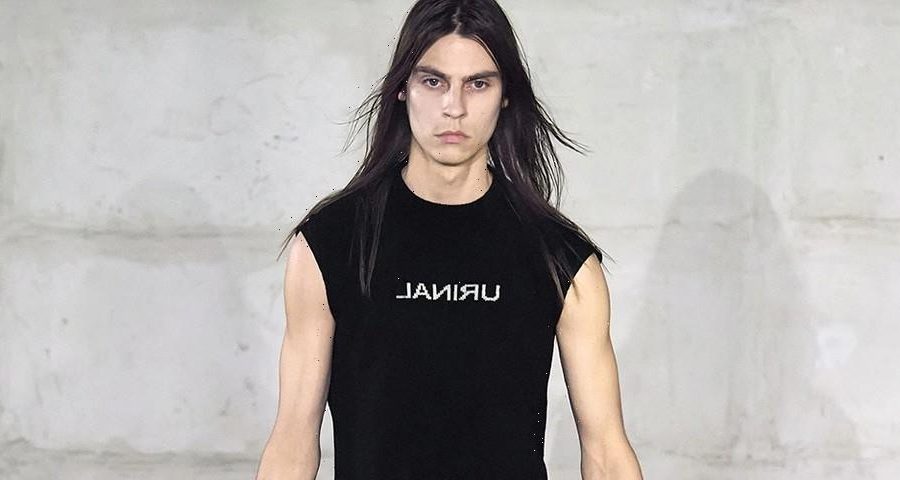 Rick Owens knows how to cause a stir. From starring in the 2008 campaign that saw the designer shoot himself and his decapitated head sit on a piece of his own brutalist furniture to displaying male nudity during his Fall/Winter 2015 “SPHINX” runway show, the Dark Lord has often explored sex, kinks, subverted mindsets and the absurd through the medium of shock-factor for the sake of fashion. FW22’s “STROBE” collection was no exception, presenting gothic glamor alongside puffer jackets that doubled as muzzles, chockers fitted with spikes, and boots and gloves that extended beyond typical lengths to suggest a darker undertone. Now, pieces from this collection are releasing, and one leading item of controversy is the Rotten Crew Sweater.

Coming in “Black/Pearl,” the piece is quintessentially Rick with its cashmere and wool construction offering that expected level of luxury. But, it also sports the word “URINAL” woven onto the front in block capital letters. Unavoidably, this is a commentary on kinks — something Owens explored in a 2006 photoshoot by Jo-Ann Furniss for i-D that saw the designer urinate on himself.

Aside from this, the garment bares the collection’s name and attribution on the rear: “STROBE FW22.” Inside, Owens’ signature duo of fabric stripes, adorned with the collection name and season once more, round off the daring item.

In other news, Denim Tears, Our Legacy and Stüssy is the trio that has updated your double denim look.
Source: Read Full Article