AMSTERDAM — “Oh, this is a new opera?” a friend said as we made our way to the Dutch National Opera here for the European premiere of John Adams’s “Girls of the Golden West” on Thursday night. “I thought it was Puccini.”

It’s an easy mistake: Mr. Adams’s opera, with a libretto by Peter Sellars, playfully nods to “La Fanciulla del West,” or “The Girl of the Golden West.” And, like Puccini’s treacly western, it takes place in the heart of the California Gold Rush.

But the similarities end there. “Girls” is an outright rejection of the romantic West of Puccini, of the hubris of Manifest Destiny, of all the rosy myths you’ve heard about the Golden State. It is revisionist — or, rather, corrective — American history, a tale of men turning feral as they swarmed California like an invasive species.

In many ways, it is also an opera about the present. “Girls,” which had its premiere at San Francisco Opera a year after President Trump was elected, depicts California circa 1850 as a true melting pot: not just forty-niners, but also Mexican aristocracy, Native Americans, former slaves and immigrants from China and South America. And when white men’s fortunes took a turn for the worse, you can guess who bore the brunt. 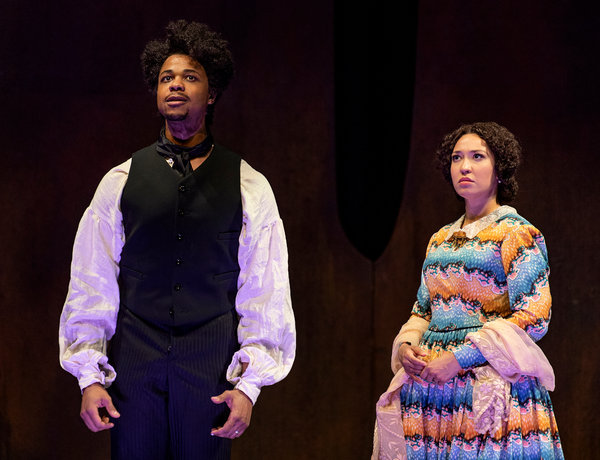 Miners down on their luck force themselves on women, lynch for sport and spend one long, frightening Fourth of July hunting as many people of color as possible. These horrors aren’t imagined; Mr. Sellars assembled the libretto from historical texts, including journals, poems and folk song lyrics of the time. For anyone worried about today, this opera seems to say, don’t be surprised: America has always been this way.

If only “Girls of the Golden West” lived up to its meaning to the American moment, or to the promise of its eminent creators. Its premiere, in 2017, received mixed reviews. I was torn, attracted to the score and singers — especially the soprano Julia Bullock and the mezzo-soprano J’Nai Bridges, two “Girls” of the title — but unable to get over a libretto that was sleepy, dramatically awkward and overly long.

Clearly aware of the opera’s problems, Mr. Adams spent last summer revising the score before it traveled to the Dutch National Opera with the same production, cast and conductor, Grant Gershon, this week. (A third stop is planned for a future season of the Dallas Opera.)

The first act got much-needed trims, and a new ending that links it to the opening of Act II. (Previously, the two acts felt as independent as a double bill.) Mr. Adams also cut the “Spider Dance,” an amusing diversion that should have an afterlife as a short orchestral work, like “The Chairman Dances” from his “Nixon in China.”

In San Francisco, Act I ended quietly, almost unexpectedly. Now, a tense finale heightens the opera’s politics. The miners celebrate the hanging of a Native American while minorities huddle indoors for safety. It’s a powerful image: Of the opera’s seven principal singers, five are people of color. Yet the white men are the only ones with weapons.

But don’t expect any more improvements to the libretto. It remains the opera’s glaring fault, a confusing assemblage of found text that keeps characters from truly interacting as dialogues become little more than simultaneous monologues. Mr. Sellars used a similar approach in his and Mr. Adams’s 2005 opera “Doctor Atomic”; it wasn’t entirely successful in that work, either, but it benefited from a streamlined story you won’t find in “Girls” until Act II.

Mr. Sellars’s solution, with a slightly altered staging in this revival, is to put more bodies onstage, to have characters spend less time addressing the audience and more time interacting with one another. But by turning to naturalism, he undercuts his original, still-present concept of a California history pageant à la Brecht — especially because the Brechtian set design, by David Gropman, is nearly unchanged. Backstage workings are clearly visible; period costumes are juxtaposed with red Solo cups inside a bar with the appearance of a roadside dive somewhere in the Sierra Nevadas.

Close listeners may also hear some Brecht in Mr. Adams’s score, played with exactitude and enthusiasm by the Rotterdam Philharmonic. It has the propulsive momentum that runs through most of his music, and playful touches of Americana like galloping rhythms and expansive fifths. But, with an accordion and a delightful taste of the lowbrow, Mr. Adams also suggests Weill and Brecht’s “Rise and Fall of the City of Mahagonny,” a similar opera about money, rowdiness and savagery.

Mr. Adams has written some of the most sophisticated and stirring choral music in modern opera; here, he most often saves it for new settings of old folk songs that take a chilling turn from boisterous to sinister. The Dutch National Opera chorus, which sang with unfortunate imprecision all night, may still be settling into these passages. (It’s not promising, though, that it was also limp and lazy in acting out Mr. Sellars’s staging and John Heginbotham’s choreography.)

But elsewhere, this score brings out some of the most inspired performances you’ll find among its cast of young stars. The tenor Paul Appleby, smooth and tender in fare like Mozart, has immersed himself in the role of Joe Cannon with a Missouri twang and desperate fury. (Genuinely tender is another tenor, Elliot Madore, as Ramón.) Ryan McKinney’s bass-baritone is terrifyingly masculine, and Hye Jung Lee, as the sympathetic prostitute Ah Sing, has an enchantingly delicate soprano voice capable of shocking power.

The most bitter music of the evening is reserved for the bass-baritone Davóne Tines, as the doomed former slave Ned Peters. With a penetrating bite, he delivers the setting of text from Frederick Douglass’s “What to a Slave Is the Fourth of July?”: “The Fourth of July is yours not mine,” Mr. Tines sings before being walked offstage with a gun to his back. Ms. Bridges’s Josefa, a Mexican woman who receives a death sentence from a kangaroo court, is fiercely dignified, and entrancing in the lullaby “Ven esta noche amado, querido.”

And it’s difficult to imagine anyone else in the role of Dame Shirley, an eloquent observer of Gold Rush life, other than Ms. Bullock, who sings — deftly somber, ardent, joyous — as if each note were written only for her. She even makes the opera’s long running time bearable with a sublime epilogue: her voice heavenly as she describes “the wonderful and never-enough-to-be-talked-about sky of California,” and Mr. Adams’s music eerily lustrous, like a precious metal worth killing for.

Girls of the Golden West
Through March 17 at the Dutch National Opera, Amsterdam; operaballet.nl.

03/02/2019 Entertainment Comments Off on Review: John Adams’s Newest Opera Returns to the Gold Mines
Recent Posts
We and our partners use cookies on this site to improve our service, perform analytics, personalize advertising, measure advertising performance, and remember website preferences.Ok