Every year at this time, I and my colleagues on the television beat publish our lists of the year’s best shows and wait, with much interest and some resignation, to be told what we missed. Our most egregious omissions this year, according to readers, included new shows like Netflix’s “Queen’s Gambit,” Apple TV+’s “Ted Lasso” and HBO’s “How to With John Wilson.”

But right there with them was a durable Amazon Prime Video series that we’ve mostly been ignoring since 2015, when I gave a ho-hum review to its first four episodes (then on the Syfy channel). “Hello? ‘The Expanse’? Anyone?” an anonymous commenter asked, plaintively summing up the frustration of that popular space opera’s fan base every time we fail to give the show its due.

So with Season 5 of “The Expanse” — announced as the show’s next to last — premiering on Prime Video on Wednesday, I went back and caught up with the 42 episodes I’d missed since that initial piece, and tacked on the nine (of 10) episodes of the new season available for review.

It was not, I’ll say upfront, a transformative experience. I was not tempted to go back and redo any Top-10 lists. But it was pleasurable, in a pandemic-doldrums kind of way. The series capably fulfills the basic requirement of speculative science-fiction: It keeps you guessing about where the journey’s going to end.

With regard to the show’s intensely devoted following, a binge only confirms what was obvious from the first few episodes. “The Expanse” is the natural heir to the cult-favorite “Battlestar Galactica” (2004-9); it’s another old-fashioned, hard-core space adventure set within an up-to-date clash-of-civilizations political allegory. It was an easy move for the “Galactica” faithful.

“Galactica” had a more drastic premise — a handful of surviving humans chased around the galaxy by exterminating cyborgs — but the post-Sept. 11, mid-climate-crisis associations with terrorist violence and existential dread are the same. The 9/11 connection becomes even stronger, if anything, in the new season of “The Expanse,” where a series of undetectable asteroids aimed at earth by an off-world zealot suggest the hijacked airplanes bearing down on New York and Washington.

“The Expanse” operates on a smaller, more intimate scale than “Galactica,” though, which is both a large part of its charm and a reason that it isn’t, at the end of the day, as viscerally exciting as its predecessor. Set about 300 years in the future, it doesn’t imagine ships zapping among star clusters. It’s contained within our solar system, where humanity has managed to colonize Mars and push out to the asteroid belt. Space travel is fast but not faster than light, and close attention is paid to the potential for catastrophe at every moment. Beyond the ships themselves, technology is reassuringly familiar: dune buggies, microwaves, communications devices that operate like souped-up cellphones. 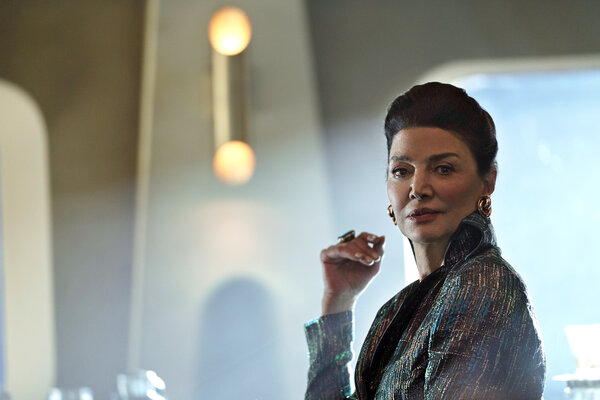 Based on a series of novels by James S.A. Corey (a pen name for Daniel Abraham and Ty Franck, who continue to write for the series), “The Expanse” builds its future world in a schematic way that provides an efficient framework for plot and, I’m guessing, appeals to viewers who like their science-fiction highly diagramed.

Earth, which exploits the mineral resources of the asteroid belt, is the developed but fading first world, locked in a superpower rivalry with warlike Mars, while the oppressed Belters represent a colonized third world. Into this setup, the show introduced a golem-like alien substance (called, with a notable lack of imagination, the protomolecule), which across the first four seasons threatened to destroy the solar system, forcing the different factions to cooperate for their survival. In its facelessness and inexorability, it was a decent stand-in for the cylons of “Galactica.”

Fighting to save the system is, as you would expect in this sort of story, a small band of outcasts, the crew of a rogue ship named the Rocinante after Don Quixote’s horse. (The series devotes a lot of thought to the whimsical names of spaceships.) They always manage to be where the action is, largely because of a semi-mystical and narratively expedient bond between the protomolecule and their captain, Holden (Steven Strait).

The protomolecule is still around in Season 5, but a human villain moves into the foreground, perhaps temporarily, and a fair bit of time is spent early on tracking the Rocinante crew members while they scatter to take care of personal business. The show handles these plot threads with its usual efficiency and intelligence, but straying from space action and big ideas has the effect of exposing the thinness and predictability of the show’s characters. (And, perhaps, reminding you that the “Expanse” novels were inspired by a tabletop role-playing game.)

When the show isn’t showing us space battles or futuristic landscapes, with understated but evocative computer graphics, the entertainment value of its human interactions depends on the performers involved. Scenes involving the tremendously likable Wes Chatham as the warrior-like mechanic Amos are always winners, and Shohreh Aghdashloo is fun to watch as the aristocratic politician Avasarala, even though the shtick of her constant swearing wore thin a few seasons ago. Strait has a soulful quality that works well for the noble Holden. Beyond that, the performance level falls off quickly.

If you can look past some wooden dialogue and stiff acting, however, the new season might be the show’s best as an adventure-drama delivery system — the creators have only gotten better at pacing and packaging a taut conspiracy thriller over 10 weeks. Hello, “The Expanse”? Sure, why not?

12/15/2020 Entertainment Comments Off on Review: Catching Up to ‘The Expanse,’ the Space Opera You Love
Recent Posts