Shostakovich’s “Leningrad” Symphony is a sprawling score that heaves, blasts, marches and meanders for nearly 80 minutes. Written in 1941, while Hitler’s forces were devastating Leningrad in a siege that would last 900 days and take at least a million lives, the work practically screams, “This is a big statement!”

And scream it did on Thursday at Geffen Hall, where Jaap van Zweden led the New York Philharmonic in a performance of the “Leningrad” that was intense and powerful — sometimes overly so.

Shostakovich began composing this symphony, his seventh, before the German invasion. Debates continue over whether he intended it as a grim portrait of a historic city under siege, or as a more general cry against tyranny. Are there coded, anti-Stalinist messages in the piece? And are those long stretches of militaristic-sounding marches bitterly ironic?

Mr. van Zweden seemed to take the piece at face value — in the best sense. He laid out this shifting score clearly, letting it speak for itself. He pushed the orchestra to blaring extremes at times, but the excessiveness of the music may call for that. (Critics who question the symphony’s merits, including Virgil Thomson, have found it obvious and steeped in banality.) 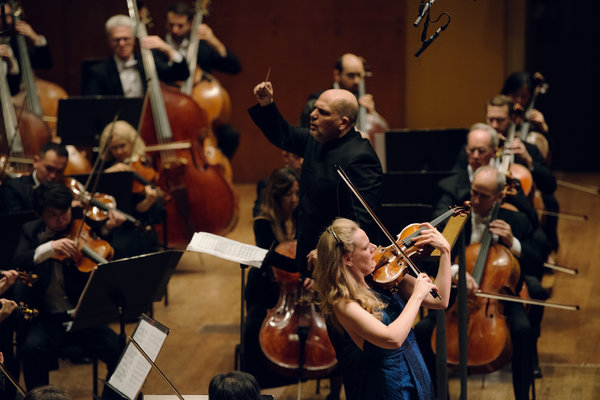 From the Philharmonic strings, Mr. van Zweden drew a dark, deep tone in the opening theme: a stern yet elusive melodic line, played in unison, that is soon goaded by bursts of drums and trumpets. The transition from there into a quizzically lyrical passage was deftly handled.

The most curious section of the nearly half-hour first movement comes when you expect a development section to begin. Instead, a snare drum plays an obsessive march rhythm. Over it, individual instruments, then groups, play what sounds like a jaunty march tune — over and over. Each statement becomes bigger, louder and more elaborately orchestrated. This roughly 10-minute section has aptly been described as Shostakovich’s “Boléro.” Mr. van Zweden and the orchestra played it straight, building inexorably to an assaultive fortissimo climax.

The Philharmonic’s high level of the performance continued throughout the symphony: the second movement’s cross between a scherzo and lyrical reminiscence; the restless slow movement; and the often frenzied finale, which drives toward of seemingly triumphant (or bitter?) coda of victory.

Mr. van Zweden opened the program with what proved an ideal companion piece: Britten’s Violin Concerto, featuring the brilliant 33-year-old Dutch violinist Simone Lamsma, in her Philharmonic debut. Ms. Lamsma, who first worked with her countryman Mr. van Zweden in 2005, played splendidly, with crisp clarity and brightly radiant sound, conveying both the rhapsodic fervor and intriguing pensiveness of the music.

Britten completed this concerto in 1939, while living in the United States. (The Philharmonic gave its premiere in 1940.) It opens with a simple riff for timpani, a curiously insistent march rhythm that runs through whole sections of the piece. The third movement is written as a mercurial, almost memorial passacaglia. It, too, seems a reflection on war.

11/30/2018 Entertainment Comments Off on Review: At the Philharmonic, a Screaming Reflection on War
Recent Posts