Some great performances come with elaborate costumes or prosthetic noses attached. Some involve crackerjack timing or floods of tears.

But the great performance Kerry Washington is giving in “American Son,” which opened on Sunday at the Booth Theater on Broadway, features no such decoration. The only thing Ms. Washington has to do as Kendra Ellis-Connor is bulldoze her way through 85 minutes of mounting agony as a mother whose son may be in desperate trouble.

Let’s add “black” to that sentence, because it changes everything: “as a black mother whose son may be in desperate trouble.”

“American Son,” by Christopher Demos-Brown, is part of a wave of new plays that consider the vulnerability of young black men in their dealings with the police. But unlike “Pass Over,” “Until the Flood,” “Kill Move Paradise” and “Scraps,” the style here is neither surreal nor poetic; it’s ticktock realism, deployed in real time. And the focus is not on the young men or the police but on the parents caught in between.

Offering a reverse angle on the standard procedural, “American Son” takes place entirely in the waiting room of a South Florida police station, where in the middle of a stormy night Kendra and her estranged husband, Scott, await news of their missing 18-year-old son, Jamal.

Scott (Steven Pasquale) is an F.B.I. agent. Is that why he is so much more effective at dislodging information from Officer Paul Larkin, the policeman on duty? Or is it because of his lack of apparent hostility? Or because both men are white? In any case, Scott quickly learns things that Kendra, who sees racism wherever she looks, cannot.

The thing is, Kendra is right. The play’s schematic setup allows Mr. Demos-Brown to demonstrate how the tendrils of prejudice creep everywhere, even into the cracks of a marriage. Scott, though he loves Kendra, simply isn’t very troubled when the clueless Larkin (Jeremy Jordan) describes her with phrases like “the natives are restless” or says that she goes “from zero to ghetto in, like, nothing flat.”

No matter that Kendra is a professor of psychology who corrects her husband’s “white trash” diction. In the mind of the officer, she is still the mother of a thug. Would he have asked a white woman, as he asks Kendra, whether her son, despite acing A.P. physics at an elite private school, has gold teeth? 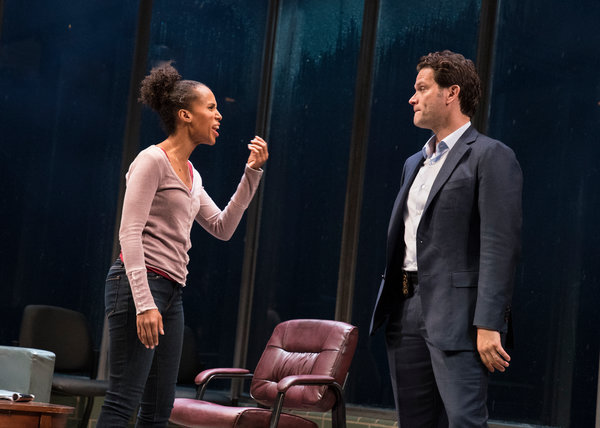 Though comments like this put the audience strongly on Kendra’s side, she does not make it easy to stay there. She is needling, sarcastic, suspicious, inflexible. It is not a pretty role, and properly so; why should Kendra have to be ingratiating to be sympathetic?

[What’s new onstage and off: Sign up for our Theater Update newsletter]

In jeans and tennis shoes, with her hair pulled back to highlight her weary, worried face, Ms. Washington trails no glamour from her seven seasons as the political fixer Olivia Pope on “Scandal.” Nor does she have any of Olivia’s finesse and power. All she has is a torrent of words, barely containing her rage at everything: at her son for slapping a provocative bumper sticker on his car, at her husband for leaving them, at the police for stonewalling her and at history itself.

For even as she speaks through Kendra’s specific experience in lines like “Everything’s coming apart,” Ms. Washington evokes a larger and longer disaster. No matter how you build your life to avoid it, her performance suggests, the day will come when your black son is in danger. Perhaps all of your decoys, all of your success, will make that day come more surely.

This is a despairing message in a despairing play, and it renders the actual plot almost secondary. Indeed, after the first few minutes we don’t learn much more about what’s happened to Jamal until the final curtain. In between, the dispensing of calibrated micro-doses of information can seem manipulative; much of it could as easily be revealed earlier.

But Mr. Demos-Brown, who is white, is interested in the procedural details only as a tensioning device. His real aim, evidently, is to shift the narrative about police and young black men from individual cases to universal feelings. It would be hard for any parent not to be harrowed by the terror both Kendra and Scott express, in their own ways, about the disappearance of their child. The play’s title clearly expresses that generalizing intention.

This puts enormous pressure on the production to keep the personal material in focus, lest the whole thing tip into polemics. Though I could quibble with some of the staging, which sometimes seems to get stuck behind furniture, this is the director Kenny Leon’s best work to date: incisive and breakneck. If the police station set by Derek McLane is a bit grand in scale, it fills the Booth nicely and emphasizes Kendra’s powerlessness. And for the first time I can recall, a thunderstorm recreated onstage actually seems like a thunderstorm instead of a comment.

The cast manages a similar feat of naturalism: These are big but nuanced performances. Mr. Pasquale, for once ideally cast, fully inhabits Scott’s contraption of a personality, easygoing for about an inch and chaotic underneath. (Listen, if you can, for his devastating last lines.) Mr. Jordan, naturally ingratiating onstage, smartly uses that ingratiation to suggest a character who has never had to dig any deeper. And as a police lieutenant who arrives near the end, Eugene Lee makes a powerful figure of a plot device.

“American Son” is not a subtle play; it barely feels like a play at all. With its unrelentingly high tension on every level — maternal, marital, societal — it’s more like a slice of a nightmare, with few contours despite its surprises. Its abrupt ending doesn’t even offer a chance for catharsis; it just spits you out.

But why should the audience be let off the hook? Why, when everything’s coming apart, should any of us?

When you purchase a ticket for an independently reviewed play or musical through our site, we earn an affiliate commission.