For those who heard the mezzo-soprano Anita Rachvelishvili’s volcanic, turned-up-to-11 Princesse de Bouillon in “Adriana Lecouvreur” at the Metropolitan Opera a couple of months ago, the start of her Dalila may come as a bit of a shock.

In Saint-Saëns’s “Samson et Dalila,” which returned to the Met on Wednesday for five performances after opening the season with a different cast in September, Ms. Rachvelishvili begins with a veritable whisper.

Her voice a sheet of gauze, individual notes fine and faint as threads, she sometimes seems to be barely singing at all in the aria “Printemps qui commence.” Her seduction — at first, that is — is about making us, like Samson, lean in closer, rather than roaring out a stereotypical smolder. She brings down the first act curtain with coy quiet.

[Read how Ms. Rachvelishvili has taken the opera world by storm.]

But her commanding first notes just after intermission show that that pale, girlish priestess was just a ruse. Ms. Rachvelishvili’s voice expands as her Dalila does: to a full-throated, lava-blooded lover unsure of whether she believes her own lies in the second act, then to an agonized, regretful woman in the third.

Elina Garanca, who played the role on opening night, was cool and immaculately elegant. Ms. Rachvelishvili is earthier, in voice and presence, and more exhilarating. Her Dalila is an unsettled, unsettling creation, changeable and realistically varied — a character closer to Carmen than I’d previously thought, voiced with ominous languor and sudden fearlessness. 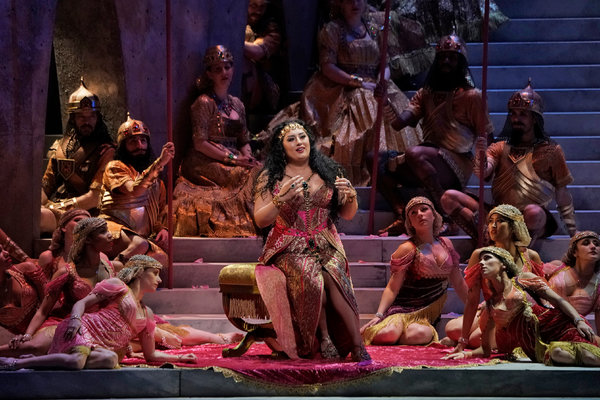 She had the unusual distinction of ensnaring two tenors on Wednesday. Aleksandrs Antonenko began the performance as Samson, but labored and coughed his way through the first act. Before the second, an announcement was made that he was struggling with a cold and would be replaced by Gregory Kunde.

Mr. Kunde is hardly an unknown. Singing now for 40 years, he is a noted leading man in Europe, in heroic roles like Radamès (“Aida”) and Calaf (“Turandot”). Once a bel canto specialist, he’s the rare tenor with both Rossini’s and Verdi’s very different versions of “Otello” in his repertory.

But at 65 — that’s no typo — he hadn’t sung at the Met since 2007, and rarely before that. There’s always reason to fear a rushed return to its daunting stage, but Mr. Kunde had a beautiful success as Samson, singing with clear, strong, focused tone and acting with moving reserve.

In cleaner, more robust voice than many tenors a generation younger (even on their healthy days), he rose by the end to genuine nobility, passionate without strain. His love scene with Ms. Rachvelishvili was quietly combustible, an achievement considering they had no opportunity to rehearse together. (The Met said on Thursday that Mr. Kunde would take over Mr. Antonenko’s remaining three performances, too; as scheduled, Kristian Benedikt will sing Samson on March 28.)

For low voices, this revival benefits from playing alongside the rollout of Wagner’s “Ring” cycle at the Met. Tomasz Konieczny (an acclaimed Alberich) and Günther Groissböck (Fasolt and Hunding) moonlight memorably with small yet meaty parts in “Samson,” Mr. Konieczny as Abimélech and Mr. Groissböck as the Old Hebrew. Along with the conductor Mark Elder, Laurent Naouri is the holdover from opening night, and he still sings the High Priest with restrained relish.

Darko Tresnjak’s production has its garish charms; I like gold-tasseled costumes and shiny crowns as much as the next guy, and the massive god statue of the finale is impressive. But the staging feels static and antsy, rather than majestic or truly energetic. For all the nearly-nude gyrations of this Bacchanale, its intensity doesn’t build to boiling.

And if you’re going to go the old-Hollywood-spectacle route, as Mr. Tresnjak does, you can’t get away with the pitiful anticlimax of his finale, which dispatches the Temple of Dagon with a little bright light and smoke. After lurid lighting and miles of shiny fabric, I want to see a temple fall down!

03/14/2019 Entertainment Comments Off on Review: A Surprise Tenor Jolts the Met Opera’s ‘Samson’
Recent Posts
We and our partners use cookies on this site to improve our service, perform analytics, personalize advertising, measure advertising performance, and remember website preferences.Ok