Opera is an art form awash with preposterous endings. If there were a competition, Bizet’s “Les Pêcheurs de Perles” (“The Pearl Fishers”), which returned to the Metropolitan Opera on Wednesday night, would win the Could Not Be Bothered Prize.

Two men, friends since childhood, love the virgin priestess Leïla, who is sworn to chastity. But she falls for one of them,the hunter Nadir, and a terrible storm pummels the village of pearl fishers. So Zurga, a local leader, condemns his friend and Leïla to death.

But then! Zurga has a better idea. He sets fire to his village so Nadir and Leïla can escape. They seem as confused as the audience at this point, but Zurga only tells them to be on their way and settles down to wait for the police to arrive. Curtain.

Even Penny Woolcock’s intelligent production, set in a tsunami-prone shantytown in Sri Lanka, can’t paper over the musical flaws of this musically luscious opera. And yet tension crackled on Wednesday — thanks to a mid-performance cast change that provided the suspense that had eluded Bizet.

When this production opened in 2015, the love triangle consisted of Diana Damrau as Leïla, Matthew Polenzani as Nadir and Mariusz Kwiecien as Zurga. Of these three, only Mr. Kwiecien, a coolly charismatic baritone, has returned. He sounded solid in the first half, even if one note broke into a wobble and, at moments, his voice boomed more than it soared.

After the intermission, it was announced that Mr. Kwiecien had fallen ill and would be replaced by his understudy, Alexander Birch Elliott. Mr. Elliott is 32. This was his Met debut. 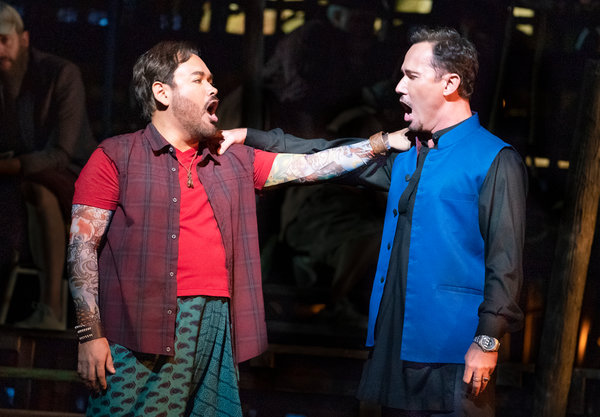 Zurga’s first appearance after the break comes after Leïla and Nadir have been canoodling under a religious shrine, heedless of the nearby armed guard. Zurga enters after they have been discovered, as an angry mob gathers under a menacing sky. Against this tableau, Mr. Elliott’s first notes sounded forlorn.

That all changed in the next scene, which finds Zurga pacing the floor of his office, chewing over his friend’s betrayal. Mr. Elliott tore into the music with heated intensity, his voice a beguiling timbre of mahogany carried by boyish ardor. When he was done, the audience cheered.

There were bumps here and there in the coordination between Mr. Elliott and the conductor, Emmanuel Villaume, but none that could detract from a thrilling debut.

The tenor Javier Camarena, as Nadir, and the soprano Pretty Yende, as Leïla, returned to a house that has grown justifiably fond of them in recent years.

Mr. Camarena’s role calls for a tenor who is not just able to reach the heights of the range but can make his home there. He does so comfortably, even if his voice sometimes hardens to a metallic sheen. His rendition of the exquisite aria “Je crois entendre encore” didn’t quite have the silken interiority of Mr. Polenzani’s 2015 performance, but it was a marvelous tribute to Bizet’s melodic genius. And with the embattled Mr. Kwiecien before his departure, he brought great heaps of lyricism and pathos to the bromance duet “Au fond du temple saint.”

The Met chorus sounded splendid. Only at the end did a strange lethargy seem to overcome its members, who slunk away rather than ran from the planned execution to save their children from burning houses. Somehow, these villagers seemed to know that the fire was just a ruse to make them clear out and bring the opera to an end.