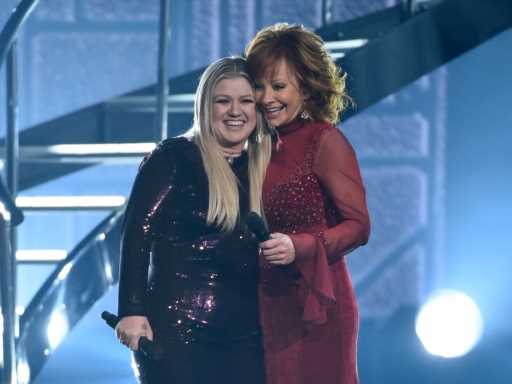 For more than a year, Kelly Clarkson has been navigating her divorce in the public eye. While the singer has been incredibly vulnerable and forthcoming about certain details of her separation, we’ve been left wondering if Clarkson is getting the support she needs when the cameras aren’t rolling. Fortunately, she definitely has a lot of love from fellow singer and close friend Reba McEntire, who shared her reaction to the original American Idol winner’s divorce from her stepson, Brandon Blackstock.

While McEntire didn’t take sides in the divorce, she clearly wants both Blackstock and Clarkson to be happy. “You know, I love them both. Brandon’s my stepson, Kelly’s my good friend,” she recently told Extra. “I am pulling for both of them. I hope they’re happy and healthy and pull though this.”

More than anything, McEntire said she was praying that “everyone gives them the encouragement that they can because they need it right now, both of them do.” But the singer left the most important sentiment for last, saying, “I love them both with all my heart.” Over the course of the past year, McEntire hasn’t particularly spoken out about Clarkson and Blackstock’s divorce — likely because she is so close to both parties involved.

McEntire, who’s been divorced twice, was previously married to Blackstock’s father, Narvel Blackstock, from 1989 to 2015. During that time, she became incredibly close to both her stepson and Clarkson, with whom she’s performed on a number of occasions. That intimate family dynamic is clearly very personal to McEntire, so it’s totally understandable that she’d want to be as thoughtful — and diplomatic — as possible when addressing the former couple’s divorce. We’re just glad to know that Clarkson has the support she needs during this transition.