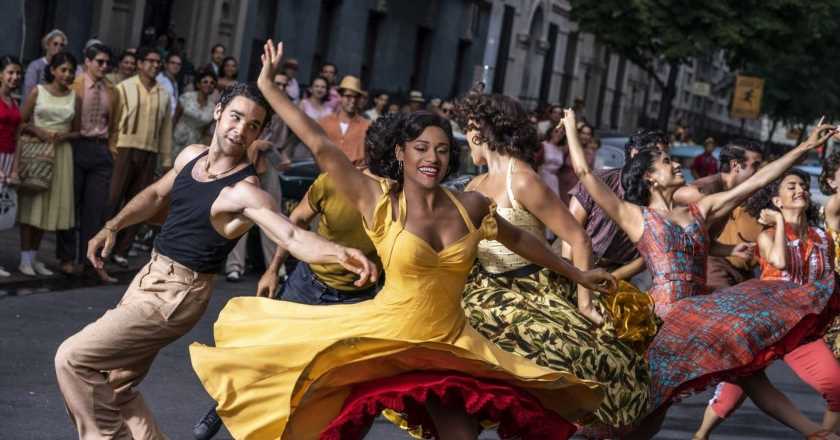 The original West Side Story, which was released in 1961, is a hard act to follow – but that hasn’t stopped Steven Spielberg.

That’s right; the award-winning director has dedicated the past few years to remaking the hit musical movie, which was famously based on the Broadway show of the same name by Leonard Bernstein and Stephen Sondheim, which was in turn a modern reworking of William Shakespeare’s Romeo And Juliet.

Many suggested the film didn’t need a remake. Many, too, insisted that they wouldn’t be watching Spielberg’s reimagining of the 60s classic. And yet… well, it seems that the director’s undeniably bold move has paid off, as the dazzling first trailer for the new West Side Story was met with extremely positive reviews when it dropped during the 2021 Oscars.

And now, after months of patiently waiting, the time has very nearly come for it to land on our screens, as it arrives in cinemas on 10 December. Excited? Here’s what you need to know about the must-see musical film.

What’s the plot of West Side Story?

As already mentioned, West Side Story is inspired by the tragic romance of Romeo And Juliet – so you better believe it’s a tale of two star-crossed lovers.

Set in the late 50s, the film sees rival gangs – the white American Jets and the Puerto Rican Sharks – battling it out for control of a neighbourhood on Manhattan’s West Side. And against this backdrop, a former Jet (Tony) and a Shark girl (Maria) fall in love.

In West Side Story, overs Maria and Tony find themselves entangled in the bitter battle between their gangster families.

Does it end happily? Well, that would be a spoiler (obviously). But, despite its air of impending doom, this is a musical filled with a bevy of absolute toe-tappers; think America and I Feel Pretty, to name just two.

Who stars in West Side Story?

Divergent and Baby Driver star Ansel Elgort has been cast as Tony, the ex-Jet who leaves the gang in pursuit of a calmer life. And newcomer Rachel Zegler will be starring opposite him as Maria, after attending an open casting call that saw more than 30,000 women audition for the role around the world.

Indeed, according to BBC News, Valentina will be taking the place of the original character Doc, who ran the corner store where Tony works. Doc’s character was also parallel to the character of Friar Laurence in Romeo And Juliet.

Is there a trailer for West Side Story?

A full-length trailer has just dropped, and it gives us the biggest glimpse we’ve seen yet of Spielberg’s cast bringing this timeless story to life. The chemistry between Elgort and Zegler seems palpable, and we can’t wait to see more of this forbidden love.

The first teaser for the movie aired during the 93rd Academy Awards, earlier this year and it was incredibly well received.

“This is absolutely the PERFECT TIME for a reboot/revival of this story of love prevailing against all odds,” reads one comment beneath the trailer on YouTube.

“And I love how this time around, they’re not backing down with the racist themes in this film, ‘cause the musical itself never did.”

It’s still a riot of colour, true, but there’s definitely a more sombre overtone to the teaser than many predicted.

No wonder so many are calling it “the movie we all need right now.”

2021 film guide: with cinemas re-opening on Monday, here are the new movies to get excited about

What are people saying about West Side Story?

“My mom was a classical pianist,” he explains. “Our entire home was festooned with classical musical albums, and I grew up surrounded by classical music. West Side Story was actually the first piece of popular music our family ever allowed into the home.

“I absconded with it – this was the cast album from the 1957 Broadway musical – and just fell completely in love with it as a kid. West Side Story has been that one haunting temptation that I have finally given in to.”

West Side Story is a riot of music and colour, albeit with tragic overtones… and it’s coming to cinemas this Christmas!

Spielberg adds: “This story is not only a product of its time, but that time has returned, and it’s returned with a kind of social fury. And I really wanted to tell that Puerto Rican, Nuyorican experience of basically the migration to this country and the struggle to make a living, and to have children, and to battle against the obstacles of xenophobia and racial prejudice.”

When will West Side Story be available to watch in the UK?

West Side Story is in cinemas in the UK from 10 December. Anyone else excited?

12/03/2021 Entertainment Comments Off on Prepare to be dazzled, West Side Story is finally arriving in cinemas next week
Recent Posts