Richard Rogers, one of the world’s most successful and influential architects, has stepped down from his firm after more than 40 years.

Lord Rogers, 87, designed landmark buildings including the Pompidou Centre in Paris, the Millennium Dome in London and the Welsh Assembly in Cardiff.

He is one of a handful of architects credited with shaping modern cities.

He has retired from Rogers Stirk Harbour & Partners, which he founded as the Richard Rogers Partnership in 1977. 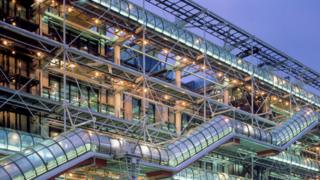 He has won most of architecture’s major honours, including the prestigious Pritzker Prize in 2007 and the Stirling Prize twice. He was knighted in 1991.

He came to prominence in the 1970s and 80s with two buildings that were controversial at the time for putting amenities like lifts and air conditioning ducts on the outside – the Pompidou, which he designed with Renzo Piano, and the Lloyds building in London.

His critics have included Prince Charles, who has spoken about his dislike of Lord Rogers’ designs on several occasions.

But that did not prevent the architect from going to strength to strength around the world. His other creations included the European Court of Human Rights in Strasbourg, the Welsh Assembly in Cardiff, Terminal 5 at Heathrow Airport and Terminal 4 of Madrid’s Barajas Airport.

The piazza as a public meeting place is often central to his ideas. “The concept that cities contain places where people can exchange ideas and meet others – that’s the most exciting thing,” he told the BBC World Service in 2013.

More recently, he built 3 World Trade Center in New York, an 80-storey skyscraper on the site of the former Twin Towers.

But he has said his favourite project was one of his first, and the most personal – the modernist house he designed for his parents in Wimbledon in the late 1960s.

He also advised on urban planning in cities including London and Barcelona. He chaired the influential Urban Task Force on the state of the UK’s cities from 1998-2001.

His company will now be led by partners Ivan Harbour and Graham Stirk, and under its constitution will drop Rogers’ name within the next two years, according to Building Design.

Rogers Stirk Harbour & Partners gives 20% of its profits to charity – around £500,000 a year, according to its website.

09/03/2020 Entertainment Comments Off on Pompidou and Dome architect Richard Rogers retires
Recent Posts
We and our partners use cookies on this site to improve our service, perform analytics, personalize advertising, measure advertising performance, and remember website preferences.Ok