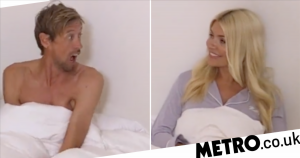 You need to see Peter Crouch waking up next to Holly Willoughby – you will laugh for days, trust us.

The football star, 41, was joined by model wife Abbey Clancy, 37, on The Michael McIntyre Show, and was roped into a game of real-life spot the difference.

Sitting shirtless in a cosy double bed, The Masked Dancer judge was tasked with spotting what had changed in his surroundings after the lights were turned off and on.

‘So, basically, the lights are gonna be turned off. When the lights are turned back on, you are going to need to spot as many differences as you can,’ Michael explained.

And it took him an embarrassing amount of time to realise that the blonde woman sitting next to him was, in fact, not Abbey, but This Morning host Holly.

The first thing he noticed was that comedian Michael was wearing a green bucket hat, which he hadn’t been before the lights were switched off. 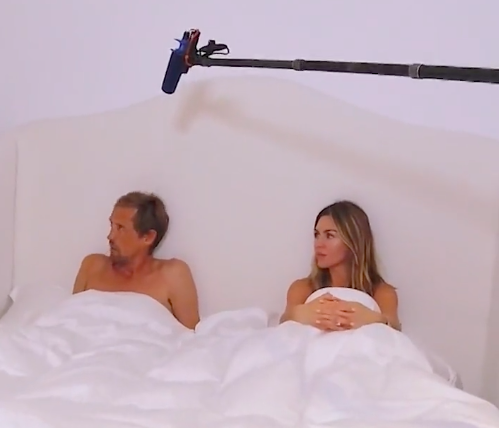 Thirdly (nope, still didn’t clock), he spotted an inflatable banana sitting in the corner of the room, which had been swapped out in place of a candle.

Well, it even took him a moment to remember what was there before the banana, incorrectly guessing that it was a table.

It wasn’t actually until 45 seconds into the round that the sporting legend looked to his left, letting out a shriek of combined horror and shock as he saw who had been there the whole time.

Peter quickly threw the cover over his head, and all Holly and Michael could do was cackle.

‘That was a brilliant reaction!’, Michael laughed, with Peter himself now in stitches.

‘I wasn’t expecting that one!’, he joked.

‘This was weird for me too,’ Holly quipped.

Reacting to the clip on Twitter, Peter wrote to Michael: ‘You’re a bad person.’

Viewers thoroughly enjoyed it, though, with one joking: ‘Absolutely hilarious! I don’t think @McInTweet is on your Christmas card list this year Peter.’

‘I’m watching this on repeat and crying with laughter here,’ wrote another.