Paul Epworth, who has worked with stars from Paul McCartney to Adele, has been named producer of the year by the Music Producers Guild for a third time.

His win meant he automatically received the Brit Award for best producer, which was also presented at the guild’s ceremony in London on Thursday.

Meanwhile, ex-Eurythmic Dave Stewart was honoured with an outstanding contribution to music award.

But the top award went to Epworth, who has produced tracks for the likes of Coldplay, U2, Primal Scream, Bloc Party and Plan B.

He first won the accolade in 2010 following the release of Florence and the Machine’s Lungs. In 2013, he won for his work on Adele’s Bond theme Skyfall, among other hits. 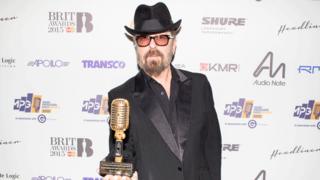 The past year has seen him work with Lana Del Ray and FKA Twigs as well as Coldplay and U2.

The other nominees were Goldrapp’s Alison Goldfrapp and Will Gregory; Flood, who collaborated with Foals and Depeche Mode; and Jake Gosling, who worked on Ed’s Sheeran’s million-selling X.

Epworth told the BBC he felt “a bit lucky” to win again.

“It feels slightly weird to have won it for a third time and I definitely don’t feel justified this year because the Goldfrapp record is incredible, Flood is someone I have looked up to for 25 years and Jake Gosling is someone who has had an incredibly successful year making hits both here and around the world,” he said.

In other categories, former Blur frontman Damon Albarn received the award for inspiration, while Giorgio Moroder won the innovation prize.

Moroder, 80, worked with Daft Punk last year and is about to release his first solo album in 30 years, which will feature Kylie Minogue, Charli XCX and Britney Spears.

The award for UK single of the year went to Sam Smith’s Stay With Me, adding to the awards the track won at the recent Grammy Awards.

Guild chairman Steve Levine said: “This truly reflects the incredible amount of recording talent we have here in the UK and I am delighted that the Music Producers Guild is annually able to give these worthy professionals the credit they deserve.”

09/13/2020 Entertainment Comments Off on Paul Epworth wins third Brit Award
Recent Posts
We and our partners use cookies on this site to improve our service, perform analytics, personalize advertising, measure advertising performance, and remember website preferences.Ok