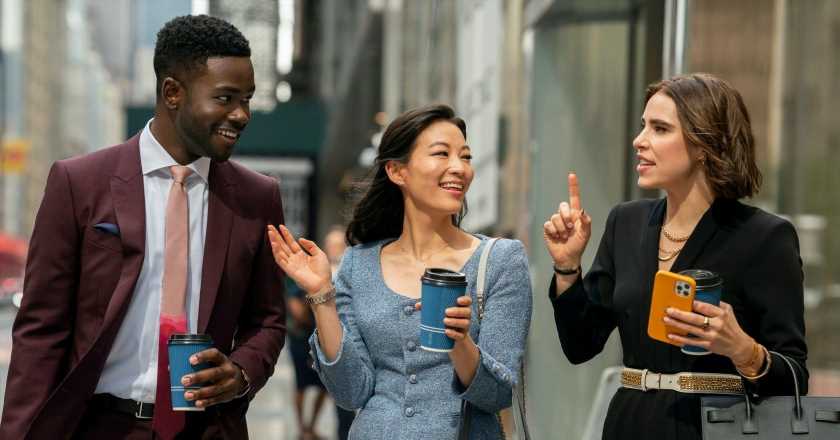 Everyone’s talking about the new trailer for upcoming Netflix legal romcom series Partner Track. Here’s everything you need to know about it.

Legal dramas as a genre seem to be improving with age. As well as past favourites like How To Get Away With Murder, Suits and American Crime Story, we’ve had a slew of new ones to get our teeth stuck into lately. Sky brought us Your Honor, Netflix gave us a reboot of The Lincoln Lawyer and we also had the series adaptation of Anatomy Of A Scandal.

If there’s a courtroom and a fierce female lead, count us in. That’s part of the reason why we’re so excited for upcoming Netflix series Partner Track. It isn’t just about prestigious lawyers (although it does deal with that) and the cases they have to cover; rather, it centres on Ingrid Yun (Teen Wolf’s Arden Cho) and the track she has to take to become a partner at a law firm.

With the new trailer having just dropped, we’re excited about what looks like a blend of comedy, topical issues including racism and privilege and a healthy dose of will they/won’t they romance. With that, here’s everything you need to know about Partner Track.

What is the plot of Partner Track?

As previously mentioned, the series is all about the trials and tribulations of lawyer Ingrid Yun (Cho). She’s a first-generation Korean American woman and the first lawyer in her family. But working at such a prestigious – and very old school – law firm, Parsons Valentine, comes with its fair share of ups and downs.

As the synopsis reads: “With the support of her friends, she battles through workplace challenges to break through the glass ceiling on her path to become partner. But will her drive and ambition leave room for love?”

The new series is based on the 2013 acclaimed novel of the same name by Helen Wan, who has described it as an “American dream story”. Wan’s website describes the book as being about “a woman of colour learning to navigate the alien culture at a powerful global law firm. It’s about chasing ambition while attempting to live authentically at work and remaining true to ourselves and our values.

“I’ve always been fascinated by our complicated relationship with “success” and ambition. I love a good workplace story, and tales about leveling the playing field. I root for underdogs, fairness and kindness.”

The legal romcom comes to Netflix at the end of August.

Who will star in Partner Track?

Is there a trailer for Partner Track?

There most certainly is and it’s quickly gone viral, not least because it looks fun, female-led and like the perfect kind of binge-watchable TV we love. As Ingrid’s friends talk to her about her six-year wait to become partner, we find out that she’s dating one of New York’s most eligible bachelors – that is until her brand new work colleague turns out to be a former flame.

She literally never stops working and being in a majority white, male law firm, it’s easy to see why. “You have no idea how hard it is to be a person of colour at this firm. When we’re at the top, we push them inch by inch,” Ingrid says.

Ultimately, though, the trailer gives us an insight into what this series is really all about – showing that hard work is warranted but also, so is living your life to the fullest. As Ingrid succumbs to date nights, friend outings, playing dress-up in expensive boutiques and partying, we can’t wait to see if Ingrid really is the woman that can have it all.

Watch the trailer for yourself here:

What has been said about Partner Track?

Since the trailer dropped, the internet has been awash with praise over the new series. We’re here for the representations of hard work and career-driven women still enjoying life as best as they can.

We’re already counting down the days.

For many, Arden Cho is reason enough to tune in.

When and where will Partner Track be available to watch?

It’s one to add to the summer roster of TV. Partner Track will be available to stream on Netflix on 26 August.