A sculptor and designer, Daniel Arsham has returned to painting — a medium he had largely left behind. 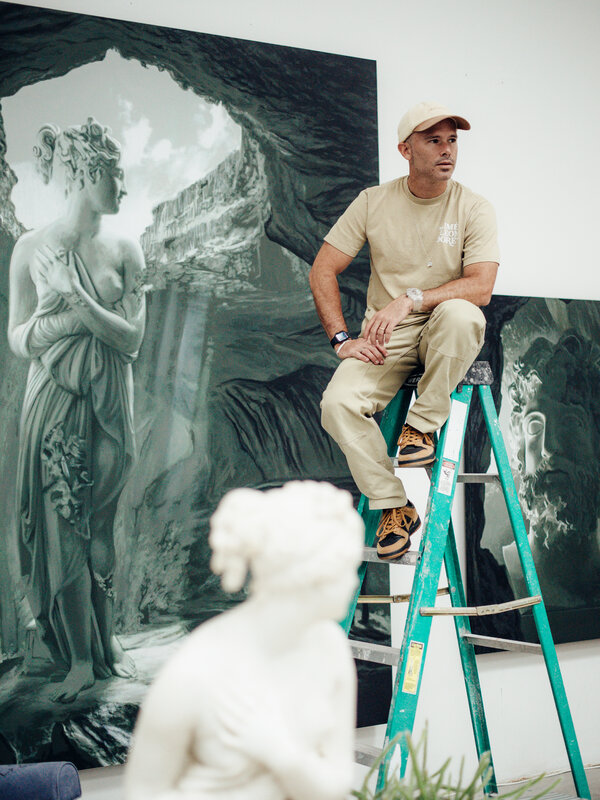 This article is part of our latest Fine Arts & Exhibits special report, which focuses on how art endures and inspires, even in the darkest of times.

For the New York-based art and design star Daniel Arsham — whose sculpture, design and fashion projects often involve extensive teamwork and collaborations with fellow boldface names — the isolation necessitated by the coronavirus pandemic has meant a pivot to a medium he had pretty much abandoned.

“I’ve touched the canvas here and there, but I haven’t completed any major work,” Mr. Arsham said of the 17 years since he graduated from art school. But the pandemic “gave me this amazing opportunity to really go back to painting.”

The isolation in which Mr. Arsham has worked during the pandemic is in marked contrast to his typical, highly collaborative M.O., like the new body of work he has created for his solo exhibition at the Musée Guimet in Paris, which opened last week and runs through Jan. 25.

In March, his studio in Queens closed, like other nonessential businesses in New York. So he had to find a new way to work while living in the architecturally significant home on Long Island that he shares with his wife and two young sons. With few raw materials at hand, he began drawing and picked up his paintbrushes soon after. 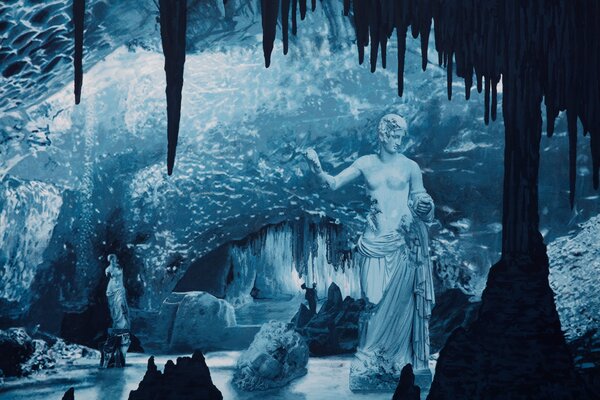 Being forced to create art in solitude, he said, is “this weird silver lining” that has “really altered the course of my work.”

While the rest of the country was stockpiling toilet paper and dried beans, he found himself doing the same with acrylics. “I learned painting with oil, but I always felt like a slave to the technique,” he said. “I always found acrylic to just be more in service of creating an image.”

“By the end of March,” he added, “I really dove into it heavily.” April, May and June ticked by with more of the same. “I’d never painted that much, because I was just there every day.”

The resulting pandemic paintings, nine large-scale works so far, will be among nearly 50 new artworks that will be on display as part of Mr. Arsham’s big solo New York show across all three floors of Galerie Perrotin, opening in January.

What runs through the new body of work is that in each one, Mr. Arsham depicts an outsize version of a cultural relic that he has rendered, or is rendering, as a sculpture. Each painting also includes a human figure. Each canvas depicts a cinematic landscape: a cave, a tropical jungle, a desert, an ice cavern, a seaside. And each new painting uses several gradients of just one color.

As an example, Mr. Arsham showed me “Tropical Cave of Zeus” (2020), which he rendered in varying tones of chiaroscuro sepia. A tiny human in silhouette looks up toward the maw of a cavern at a Mount Rushmore-size Zeus. Is the person a time traveler, an explorer, a historical figure? “I try to make the figures be a little bit ambiguous,” he said, pointing to the silhouette, “enough that you can’t really tell when they’re from; they could be in the future.”

That painting and its brethren, scheduled for sale in New York in January, are thematically linked to his show at the Musée Guimet in Paris. In both exhibitions, Mr. Arsham explores collapses that have long been on his mind, but that have in this annus horribilis of 2020 become preoccupations for many people: the collapse of time and the collapse of societies.

Before the pandemic began, Mr. Arsham began planning his show for the Guimet, which is especially famous for its trove of Asian art covering 7,000 years. His show there is part of an annual Carte Blanche series in which living artists have free rein. (Last year’s show, of the Japanese artist known as Mr., was curated by Mr. Arsham’s sometime collaborator Pharrell Williams.)

Mr. Arsham was also given full access to the archive of more than 6,000 casts at the Réunion des Musées Nationaux Grand Palais, which for more than two centuries has manufactured replicas for Europe’s major museums. The pieces he made, which are installed for viewing alongside the objects that inspired them, cross eons and geographies, taking on everything from Meiji period ceramics to ancient Greek busts to 17th-century French sculptures.

As with work he’s done for several years, in “Eroded Body of the Female Divinity” (2020), for example, Mr. Arsham has cast the sculpture in a gypsum cement called Hydro-Stone, and created various kinds of textured degradations, as if the object were a relic eroded or destroyed — “whether that comes about through some kind of cataclysmic event or through time, who knows,” he said — and pocked with crystals. Like other works in the Guimet show, the object he has replicated from the Guimet’s collection is itself a relic: The original, representing a headless female divinity, dates from the 11th century and was uncovered at Prah Vihear, an ancient Hindu temple in what is now Cambodia.

“These objects, they slide on a timeline and they do that by appearing to be falling apart. But they’re made of crystal, which we associate with growth,” Mr. Arsham said.

“So there is this ambiguity,” he said. “Are they falling apart? Are they growing together?”

Similar sculptures, as well as the new paintings, will be among the work on view in January in New York. Likely Instagram sensations will be the new works Mr. Arsham has created with Pokémon characters, as part of his interest in presenting the artifacts of contemporary culture “in the same context, in the same materials” as what we think of as antiquities. (His past work of this nature has included creating relics of contemporary sporting goods, musical instruments and electronics.)

“What I’m trying to create for viewers is to pull them outside of this moment,” Mr. Arsham said, “10,000 years from now and where that time period has been collapsed.”

He looked up at one of his pandemic paintings: “The way that we look at history is all relative to when we are in it.”

10/22/2020 Entertainment Comments Off on Pandemic-Forced Isolation Opens New Artistic Pathways
Recent Posts
We and our partners use cookies on this site to improve our service, perform analytics, personalize advertising, measure advertising performance, and remember website preferences.Ok