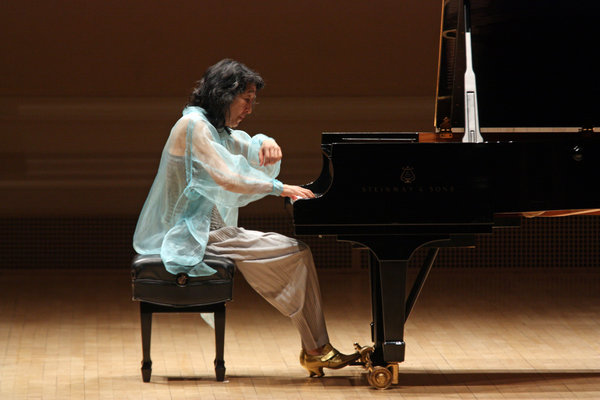 What would you play for friends to get them to love the piano?

That’s the question we posed to our writers and editors, and some of the artists we admire. It’s the latest in what will be regular iterations of what we’re calling the “5 Minutes” feature, which we started in the fall.

Listen to the choices; it’s an hour of beautiful music:

In other news, Seth Colter Walls spoke with the pianist who recently gave the public premiere of a rare work from Pierre Boulez’s salad days, the “Prélude, Toccata et Scherzo” from 1944, when Boulez was 19. Here are clips from the openings of each of the three movements:

Last week, we asked about the future of the Pulitzer Prize in Music after Kendrick Lamar’s win last year for his hip-hop album “DAMN.” Had the floodgates been opened to pop?

This week, the award answered, in essence, not so fast. While the winner, “p r i s m,” Ellen Reid and Roxie Perkins’s opera about sexual assault, takes on timely subject matter, it is a piece firmly in the contemporary classical mainstream. (I reviewed it as part of the Prototype festival in January.) As were the two finalist works, by Andrew Norman and James Romig.

Also in our pages:

The composer David T. Little’s music manages to be both politically charged and purely instrumental.

Michael Cooper profiled Philippe Jordan, the young European star who is earning strong reviews as the conductor of the Met’s “Ring” revival.

Adding another chapter to years of upheaval at English National Opera, the company’s artistic director, Daniel Kramer, is leaving.

Here’s the pianist Gilbert Kalish in 2011, visiting the composer George Crumb in Pennsylvanian, reminiscing about their longtime association and making plans. In 1974, Mr. Kalish played in the premiere performance of Mr. Crumb’s “Music for a Summer Evening” for two amplified pianos and percussion, a vibrantly colorful piece that has become almost as well known as Bartok’s Sonata for Two Pianos and Percussion, which inspired it.

On Tuesday at Alice Tully Hall, Mr. Kalish, now 83, took part in an arresting performance of “Summer Evening” that concluded a two-part tribute to Mr. Crumb in honor of his upcoming 90th birthday, presented by the Chamber Music Society of Lincoln Center.

Tuesday’s program opened with Mr. Crumb’s “The Ghosts of Alhambra,” for voice, guitar and piano, followed by an intensely dramatic account of “Black Angels,” for electric string quartet. The performance of “Summer Evening,” which utilized a stage-filling battery of percussion instruments, was especially affecting. Mr. Crumb’s language, while steeped in modernist techniques, sounded more personal than ever, as the music shifted between episodes of terror and tenderness, mystery and playfulness. And it was inspiring to see Mr. Kalish performing with three considerably younger artists: the pianist Gloria Chien and the percussionists Ayano Kataoka and Ian David Rosenbaum. ANTHONY TOMMASINI

On Monday at Roulette in Brooklyn, the trumpeter Peter Evans and the percussionist (and electronics specialist) Levy Lorenzo played a continuous hourlong duo set that was packed with technical virtuosity and textural variation. Announced from the stage as a collection of new pieces, the concert’s virtues also brought to mind their prior album “Q,” released on Mr. Evans’s label in 2018. For a brisk hit of these artists’ roving interests and mutual compatibility, listen to the track “Becoming.” It begins with quick-changing but hard-riffing phrases for both players, before settling into a droning exploration of some mellower timbres. SETH COLTER WALLS

Dave Ruder is perhaps best known for his work as a vocalist in recent performances of works by Robert Ashley. But he is also a composer and guitarist. Those two facets of his musical personality are highlighted on the new album “Minimal Surface,” by the band Thee Reps. The group — which also includes bassist Jeff Tobias, the keyboardist Sam Morrison, the violist Karen Waltuch and the drummer Max Jaffe — cites “Minimalism, Krautrock of the ’70s, and post-rock of the ’90s” as touchstones, but with a “less bombastic” touch. The comparatively relaxed nature of their overall attack makes for a peculiar and satisfying twist on those influences, particularly on the album’s opening track, “Big Bebek,” written by Mr. Ruder. SETH COLTER WALLS

04/20/2019 Entertainment Comments Off on Our Favorite Piano: The Week in Classical Music
Recent Posts
We and our partners use cookies on this site to improve our service, perform analytics, personalize advertising, measure advertising performance, and remember website preferences.Ok