CHICAGO — The conductor Daniel Barenboim entered the rehearsal room. Musicians of the West-Eastern Divan Orchestra, the improbable ensemble he founded nearly 20 years ago with Edward Said, were tuning their instruments, listening intently to one another.

“I’m very, very happy to see you here,” Mr. Barenboim said to the orchestra, whose members include Israelis, Palestinians and musicians from other Arab countries. “I’m very glad that those of you that have strange passports managed to get into the United States.”

The West-Eastern Divan Orchestra is dedicated to the idea of breaking down barriers in the Middle East. But new barriers put up by the United States briefly threatened to derail the orchestra’s current tour: Over the summer, it looked as though some musicians might not get visas because they held passports from Syria and Iran, two of the nations named in President Trump’s travel ban.

They ended up getting waivers, allowing the tour to go forward. And that is how Mr. Barenboim found himself at Symphony Center here on Friday to rehearse Strauss’s “Don Quixote.” Which led to an inevitable question: As the orchestra nears its 20th anniversary, and even the seemingly modest dream of being able to play in all its members’ home countries appears out of reach, is the whole enterprise quixotic?

“When I’m with them, it doesn’t feel quixotic at all,” Mr. Barenboim, 75, said in an interview. “When I talk to you, I know it is quixotic.”

Quixotic or not, the project has overcome enormous odds since it grew out of a 1999 workshop in Weimar, Germany, that Mr. Barenboim, an Argentine-Israeli, created with his friend Mr. Said, the Palestinian-American literary scholar, who died in 2003. 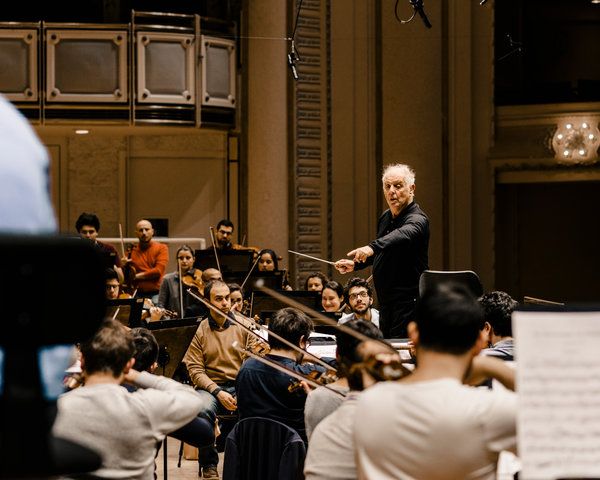 If the orchestra has not shaped the debate as much as Mr. Barenboim would have liked — a 2005 concert in Ramallah, in the West Bank, has never been repeated, and it has never played in Israel — it has become a regular presence at leading music festivals and concert halls. The five-city American tour that began here on Monday will take it to Carnegie Hall on Thursday, for a concert that is to be broadcast on WQXR and streamed live at medici.tv.

The group’s deceptively simple premise — that getting musicians from groups that have been opposed for decades to play together would foster understanding — seems even more ambitious in this polarized age. These musicians from different sides of the Middle East divide are visiting a United States riven by tribalism and racial animosity, and reeling from the anti-Semitic killing of 11 at a Pittsburgh synagogue and the spate of pipe bombs mailed to prominent critics of President Trump.

The Divan Orchestra, Mr. Barenboim said, was not created as a political orchestra, or as an orchestra for peace, but simply as a way to promote dialogue — starting with its own members.

“I sat them together, so you had a Syrian cellist and an Israeli on the same stand,” Mr. Barenboim said. “What do they do? First of all, they tune to the same A. So they have to listen. Then they try to play the same way, with the same bow strokes. They do that for six hours a day, and then they eat in the same dining room. Their attitude changes.”

Making music is hard work: Mr. Barenboim, who led the rehearsals this week in English — dipping into German, Spanish or French where appropriate — could be a demanding taskmaster. But he was also quick to show warmth and delight, and to offer guidance.

“Wonderful. Wonderful!” he said after a run-through, once they had earned it.

During rehearsals, the players — the youngest are in their teens, the oldest in their 40s — applauded one another and exchanged sympathetic looks after Mr. Barenboim’s criticisms.

But there has been plenty of tension over the years. The project has been disparaged by many Israelis and Arabs alike, with players sometimes feeling displeasure from their families. And the events of the all-too-real world have a way of intruding. When Israel waged war against Hezbollah in southern Lebanon in 2006, several Arab musicians did not play with the orchestra — some because they could not travel, others because they felt unable to.

Nassib Ahmadieh, a cellist who grew up in Lebanon, said he could not bring himself to perform that year.

“I didn’t have the psychological state to go on tour with the orchestra while my parents were under bombardment, and the whole country was severely damaged,” said Mr. Ahmadieh, 41, who now lives in Germany. “I couldn’t imagine myself traveling around and playing Beethoven’s Ninth Symphony. It was too optimistic for me.”

Mr. Barenboim’s trip to Chicago was a kind of homecoming: On Thursday he received a huge ovation when he returned to his old podium at Orchestra Hall to conduct the Chicago Symphony Orchestra for the first time since he stepped down as its music director in 2006. When he left, there were rumors of bad blood, which his long absence did little to allay.

He insisted there was no animosity: He had simply wanted a clean break, he said, and rarely appears as a guest conductor, given his schedule as general music director of the Berlin State Opera and chief conductor of the Staatskapelle Berlin, not to mention his piano concerts. He has also shepherded the creation of the Barenboim-Said Akadamie in Berlin, which offers music degrees and courses in humanities, and concerts in the Frank Gehry-designed Pierre Boulez Saal.

Mr. Barenboim has long been outspoken. When Israel passed a new law this year that enshrines the right of self-determination as “unique to the Jewish people,” he wrote that it made him ashamed of being an Israeli. After the United States decided to move its embassy to Jerusalem, he warned that it would make the situation worse and called on the world to recognize Palestine as a sovereign state. In his interview here, he said that the problem that inspired him to create the Divan orchestra remains much as it was then.

The concert here on Monday opened with “Don Quixote,” featuring the soloists Kian Soltani, a rising young Austrian-Persian cellist, and Miriam Manasherov, an Israeli violist. And it ended with a rare sight in concert halls: the players hugging one another onstage.