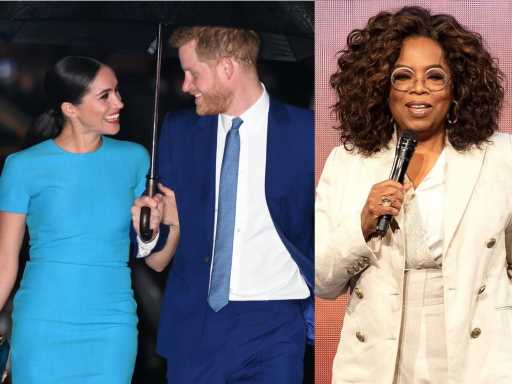 The air date for Oprah Winfrey’s interview with Prince Harry and Meghan Markle is less than two weeks away (it’s March 7, in case it’s not already circled in red on your calendar) and we’re already giddy with anticipation over what will be revealed. But apparently, that’s not totally nailed down just yet. While the 90-minute special was shot last week, a new report says the talk show host and her royal subjects “may have to be re-edited or even partially re-shot due to the rift it has caused with the royal family and 99-year-old Prince Philip’s hospitalisation,” according to the Daily Mail.

Queen Elizabeth certainly dampened the couple’s spirits after officially yanking their patronages and Harry’s honorary military titles. Apparently, the Queen doesn’t believe you can be half-in and half-out as senior royal members. That’s a fair consequence, considering the stateside duo has entrenched themselves in the entertainment industry since their move to California and are enjoying their lucrative production deals with Spotify and Netflix.

Neither side can seem to find any middle ground with their ongoing feud — the royals have to be able to make decisions that honor their work while Harry and Meghan’s choices should also be respected. But these days it seems like it’s a constant battle to see who can top each other in headlines and have the last word with the media: It was just announced that Queen Elizabeth will be making a TV appearance on the same day as Harry and Meghan’s Oprah interview.

While we don’t know what the young royals will be discussing — or what may need to be re-edited — it seems likely that Meghan will share her thoughts on her press-seeking dad Thomas Markle and half-sister, Samantha Markle. This Morning host Holly Willoughby revealed that British network ITV had been contacted by Oprah’s team for footage of Samatha’s January 2020 interview where she stated that Meghan still owed their father an apology for the wedding debacle.

“Oprah Winfrey’s team contacted This Morning requesting footage from our interview with Samantha Markle in preparation for the interview with the Duchess of Sussex,” said Willoughby on Monday’s show via the Daily Mail. “So, we don’t know whether or not they used that in the interview, but what we do know is nothing was off-limits.”