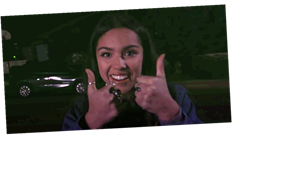 Now that we’ve had Olivia Rodrigo’s “Drivers License” music video on repeat since it released Jan. 8, we’re more than thrilled that there’s now a behind-the-scenes video of how it all came together. On Jan. 27, the 17-year-old singer released the companion video which details everything from how she shot the memory projections to why the vintage white Mercedes was chosen as the car she drives. “I just wanted it to kind of capture the feeling of teenage heartbreak in the suburbs, which has kind of been my experience,” Rodrigo said of the music video.

If you’re wondering whether or not actual drives through the suburbs happened during the making of the video, it’s both a yes and a no. “The director was just driving through the neighborhood and was like, ‘That’s a beautiful house.’ So he literally just knocked on the door and the people were like, ‘Yeah, you can come film in our home,'” Rodrigo added with a grin. Her drives, however, were seemingly shot in a studio. You can learn all about the making of “Drivers License” in the full video above.