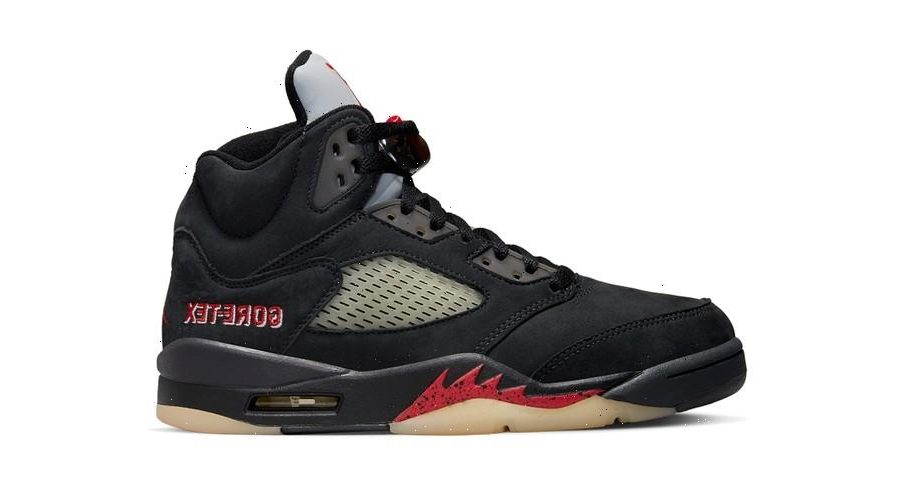 Nothing indicates an item being Fall/Winter ready more than GORE-TEX. The industry’s go-to for tackling harsh weather, GORE-TEX continues to be favored by brands when prepping products for the elements. For Nike, this has been the case with several of this season’s Air Max 90s, its new ACG Air Zoom Gaiadome boot and various Jordan Brand colorways found on models such as the Air Jordan 1. Now, the Air Jordan 5 is outfitted with a GORE-TEX upper.

Following a brief first look at this GORE-TEX “Off-Noir” colorway, Nike has now shared official images of its newest Air Jordan 5. Carrying an “Off-Noir/Fire Red-Black-Muslin” color palette, the look is seemingly inspired by 2009’s “Raging Bull” release. A washed out black covers the GORE-TEX backed upper with “GORE-TEX” and “23” branding embroidered on the lateral heel of the left and right shoes respectively, resting next to the heel’s red embroidered Jumpman. A translucent midfoot webbed window combines with a 3M tongue featuring another red Jumpman to round out the upper’s specifications. As for the sole unit, a translucent gum outsole rests beneath a black midsole with a red shark tooth pattern.

Release information regarding the Air Jordan 5 GORE-TEX “Off-Noir” remains partial as the shoe is expected to launch in women’s sizing this December via Nike and select retailers at a price of $220 USD.

In other footwear news, a detailed look at the Air Jordan 5 “UNC” has surfaced ahead of its 2023 release date.
Source: Read Full Article