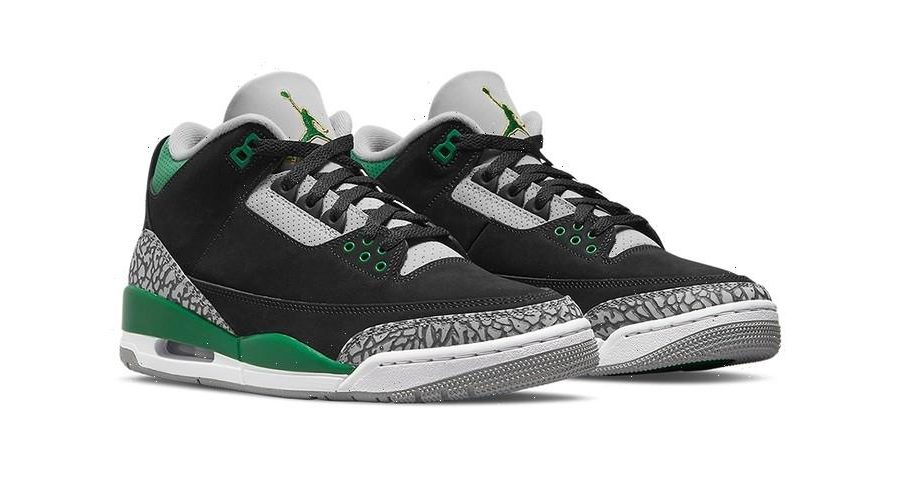 The holiday season is typically an extremely busy one for Jordan Brand as it will usually line up a handsome batch of retro offerings to drop off to the public. 2021 is no different, and on the imprint’s lineup this year are various striking iterations, one being the Air Jordan 3 “Pine Green” colorway. The installment — which elicits memories of the brand’s “Oregon” AJ 3 PEs — initially surfaced by way of leaked imagery, but now we have a detailed look at the pair thanks to its official images.

Construction-wise, this pair evades from the traditional leather base layer and instead opts for suede-covered lateral and medial walls that are dripped in a stark black. Cement-printed overlays stick to their customary gray and black outfit, while notes of “Pine Green” stand out atop the collars, interior liners, Jumpman logos on the tongues, midsoles and the eyelets. More doses of gray pop up on the tongues, throat, and the heel’s Jumpman branding, the latter of which is backdropped by a black heel counter. Additionally, a sliver of gold also makes its presence felt as it borders the tongue insignias.

Grab a closer look at the kicks here above and note that they’ll be dropping via SNKRS and other retailers come October 30 for $190 USD.