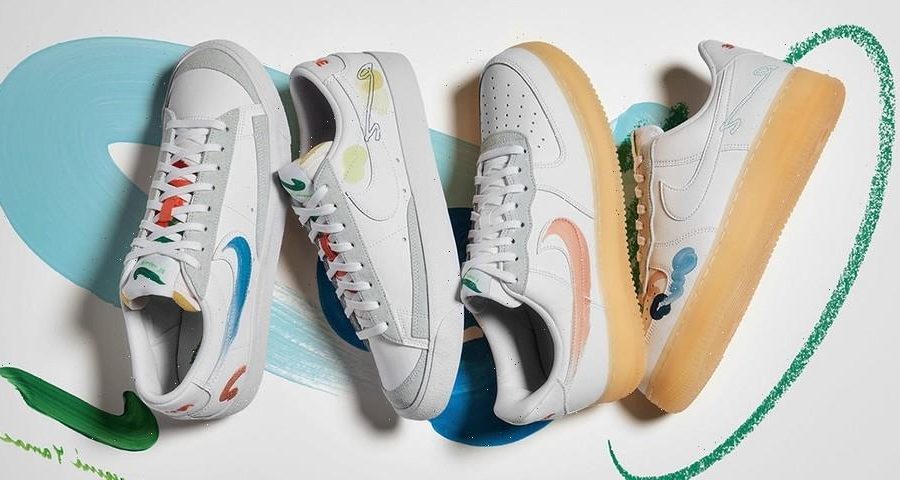 Both pairs are treated with Yamase’s playful and vibrant design language, the graphics of which draw from her value of community as a creative and dynamic element of her projects. “Community gives me a sense of comfort and fun in my daily life, but it also stretches my imagination and surprises me, leading to discoveries in my own artwork that challenge my expectations,” she says when reflecting on her design mentality.

The uppers of each take are constructed with at least 50 percent recycled leather fibers and are guided by understated white leathers and various bursts of earthy pastels. The Air Force 1 proposal is whipped up with peachy brush stroke Swooshes, Yamase’s moniker on the tongues and whimsical graphics skewed to the lateral forefoot of the right shoe. Down below, the bottom piece is tinted with a creamsicle looking hue. Its release sibling — the Blazer Low — sees through to a mostly white and gray build, and comes ornamented with ocean blue Swooshes, carrot-like accents down the throat and the identical paint brush green Nike checks with Yamase’s namesake on the tongues.

The Nike Air Force 1 Flyleather and the Nike Blazer Low Flyleather are dropping on May 19 on SNKRS, NikeLab MA5 and DSM Ginza (Tokyo).