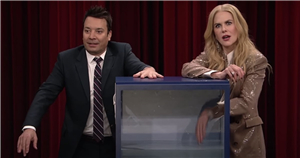 Jimmy Fallon plays too much! In his latest antics, The Tonight Show’s host invited Nicole Kidman to participate in a game titled “Can You Feel?” on Wednesday. For the game, Fallon and Kidman took turns reaching into a box containing a mystery item only their opponent could see. There was everything from a literal shrimp on a Barbie to eggnog to a swimming eel to nail clippings — seriously, who contributed to that?

At first, a confident Kidman declared, “I am so ready.” But as the game progressed, she shrieked at each item, telling the audience, “I can’t believe what a coward I am.” When it came to the shrimp on a Barbie, she reprimanded Fallon for being “so bad.” Fallon was utterly disgusted when it came to the nail clippings, yelling, “Get this away from me! This is the grossest thing.” And finally, Kidman and Fallon decided to both go in to touch the last item: an eel. The Being the Ricardos star had it after that one. “You are in so much trouble!” she shouted at Fallon, who claimed he “would never do that” to Kidman and that he “didn’t know anything about this.” Watch the full clip above!